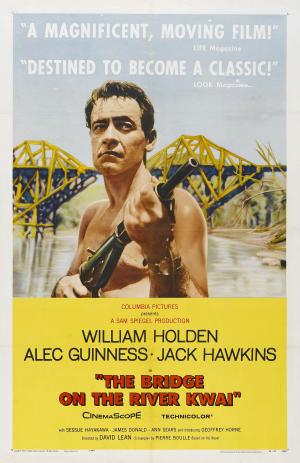 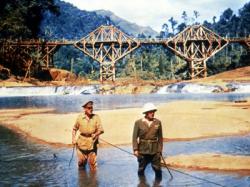 For a brief time, between Stalag 17 (1953) and The Great Escape (1963), stories of World War II prisoners of war were popular. All were treated with the utmost respect for the men who spent some of the war in the hands of the enemy or died while behind barbed wire. So many of the survivors were still alive during that time and their remained many first hand accounts. James Clavell wrote "King Rat" (1962) which was inspired by his experiences in a Japanese prison camp.

The novel "The Bridge on the River Kwai" was written by Pierre Boulle who was a French engineer in Singapore, who was captured and forced into two years of labor. His novel is not an autobiography. Like Clavell, it is a work of fiction based on first hand experiences. Interesting note is that the screenplay was written by Carl Foreman and Michael Wilson. Because they had been blacklisted they were not allowed to receive credit for the film. When it won an Oscar for best adapted screenplay, the award was given to Boulle. It was not until 1984 that Foreman's and Wilson's names were put on the trophy.

The Bridge on the River Kwai is a psychological war film about loyalty and duty. It tells two stories. The first is of Alec Guinness as Colonel Nicholson, the head of a British prisoner of war battalion who has just arrived at a Japanese prison camp in the jungle. Already in the camp is Lt Shears, the lone American and the longest surviving prisoner in the camp. His is the other story.

The camp is run by Colonel Saito. Shears survives through lies and by staying out of the way. Nicholson has no such intentions. He and Saito butt heads immediately after Saito announces that British officers will work just as hard as the enlisted men building a bridge. Thus begins a battle of wills between the two opposing officers. Saito clearly has the upper hand as he holds the lives of everyone in the camp in his hands. The power starts to shift when it becomes apparent that if he makes some allowances to Nicholson, he will cooperate with the construction of the bridge.

Cooperate he does and the bridge becomes a solid, quality structure. This causes a British Doctor to question Nicholson's loyalty but Nicholson defends his enthusiasm for the project with words of pride and accomplishment. He argues that it is helping his men as Saito treats them better the harder they work. Nicholson, after so much time in isolation, and his own stubbornness, has suffered Stockholm Syndrome. By the time the bridge is completed, he acts more like an equal to Saito than his prisoner. Nicholson's sense of reality has warped.

Early in the film, Shears escapes and eventually makes it back to a British military hospital. There he plays in the surf, has sex with a nurse and genuinely makes up for the harsh conditions he experienced in the camp. Then comes the news that the brass know his secret and that he has to join a commando group and sneak back into the jungle to blow up the bridge on the river Kwai. The final scene where Nicholson says a single word to Shears, "You!" is immensely powerful. Reality suddenly comes into focus and the world clicks back into place. Unfortunately a heavy price gets paid for that to happen. The ending is heart wrenchingly bittersweet at best.

The Bridge on the River Kwai was a critical and financial success. It won seven Academy Awards including Best Picture, Director and Alec Guinness won for lead actor. What it also did was enter the world of pop culture. The following year Sessue Hayakawa parodied his role here in The Geisha Boy (1958). It features a clip of Alec Guinness and a model of a bridge. What it also does is feature the famous whistling of the song "Colonel Bogey March" which was originally written in 1914. The catchy tune would reappear in countless television shows and movies. When the twins are at summer camp in The Parent Trap (1961) they whistle it while they march.

I am not sure why, perhaps it was because Wilson and Foreman were finally given screen writing credit in 1984, but the catchy tune was rediscovered by the Brat Pack in the 1980s. When bored during detention, The Breakfast Club (1985) whistle it to pass the time. The following year Ally Sheedy's robot, Johnny 5, whistles the song in Short Circuit.

Like the famous tune, The Bridge on the River Kwai is a classic that should live on through the ages. 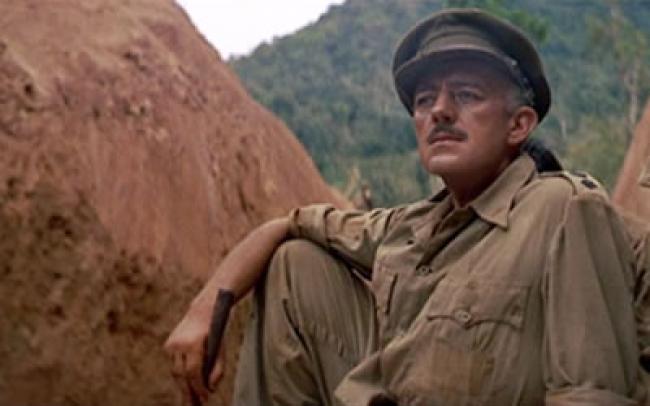 Alec Guinness in The Bridge on the River Kwai.

The fact that the novel this film was based on was written by a Frenchman is key I think. The depiction of the stiff upper lipped Colonel Nicholson is almost a caricature. Guiness plays it brilliantly, but he reportedly clashed on the set with director David Lean on how to play his character because he felt that at its heart the script was anti-British. He wanted to play Nicholson as more sympathetic, but Lean disagreed. Although it makes a great film, it should be noted that this depiction of the cooperating British officer is not historically accurate, and the British prisoners actually worked to delay the building of the bridge as much as possible.

Historical inaccuracies aside, this is a great adventure film. It's sweeping and epic as you would expect from a David Lean film, even though this was his first such epic. Like all of his epics, it runs long, but not unbearably so. Sure, there are scenes of tramping through the jungle that could have been trimmed, but they were so beautifully shot on location that they are a treat to watch, particularly in the restored version on HD that is available today.

As has become common, continuing today, an all British film includes a lone American. In this case it is William Holden playing the commando who in the original novel was also British. This is done to help sell the film in America. Think Steve McQueen in The Great Escape or Julia Roberts in Notting Hill. Holden is terrific. In an era of clean cut, square jawed, heroes he always managed to play a little darker and more cynical, but without sacrificing charm. No matter how much he's looking out for himself in movies like this one or Stalag 17 or Sunset Blvd, you still want to see him succeed. In this film his character only does his duty when he has no other choice, but instead of seeing him as cowardly, he comes across as one of the most sensible characters in the film. He also provides the film's lighter moments, including the ability to find love even in the heart of the jungle.

Despite the epic nature of the script and the sweeping vision of Lean's direction, this is at heart the story of three different characters. The very British Nicholson, the opportunistic American Shears, and the stoic Japanese Saito. Each of these men strive to live by their own personal code. Nicholson will do anything to maintain the standards that he thinks life should be lived by, and his efforts do help keep the men alive and sane, even if his methods are dubious. Saito is striving to do his duty and maintain his honor, but is ultimately shamed by the British (his character has received as many complaints from Japanese critics as Nicholson's has from British ones). In truth, Saito is a rather benevolent commandant despite claims in the movie to the contrary. Real life prisoners of war who saw the film spoke of how conditions were much worse than depicted. And finally, Holden, whose personal code is just that. Personal. He sees himself as his first priority. Perhaps the film's strongest message is that despite these men's differing philosophies, they all share the same fate at the film's climax.

This film was so successful at the time of its release that it altered the British film industry for decades. Prior to this film Britain was known for making smaller, lighter films along the lines of the Ealing comedies. Following this one, sweeping epics would become their bread and butter. It wouldn't be until the 1990s, with the release of Four Weddings and a Funeral that the industry returned to its roots.