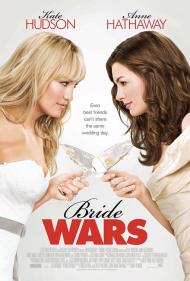 How can a movie make these two normally charming actresses so unlikable?

I've enjoyed a few chick flicks in my time, but Bride Wars is not one of them. I'm not sure this has so much to do with it being a chick flick as it does with it just being a bad movie in general.

Hudson and Hathaway play best friends since childhood who both find themselves engaged at the same time. Both of them have been planning their weddings since childhood and both of them have dreamed about having their wedding at the Plaza Hotel in Manhattan. A mix up occurs when they both use the same wedding planner who ends up mistakenly booking both their weddings on the same day and another opening at the Plaza isn't available for a very long time. Since neither one of them is willing to change venues they very quickly go from bffs to hated enemies from which hilarity fails to occur.

The two make catty, sitcom-ish attacks on each other; causing a fake tan to go wrong, dying hair blue, sabotaging a slide-show, trying to make the other girl fat so she won't fit into her dress, etc.. None of which are very funny.

Kate Hudson had the good fortune to inherit her mother Goldie's California girl good looks and she has a bright and breezy charm. At least normally she has that charm. Here she is completely charmless as the tougher minded of the duo, who by the end of the movie is supposed to have learned humility.

Hathaway likewise normally oozes charm, but here she comes across a bit shrill and petty as the milder of the two who learns to stand up for herself by the movie's end.

As is normal in a movie of this kind, the male characters are all flat, cardboard character who are there to be either an ass or a good guy, but by no account get in the way of the female characters.

This movie is far too bland to have any kind of subtext, but underneath it all I couldn't help but wonder about Hudson's character masculine traits and Hathaway's more submissive ones. As children Hudson was always the groom and Hathaway the bride. If the film makers had really wanted to be daring they could have revealed the real reason these two were upset with each other was because they were marrying someone else when all along they were in love with each other and then the movie could have ended with the two of them getting married on the same day, but to each other! Now that would have been a chick flick I might have enjoyed. 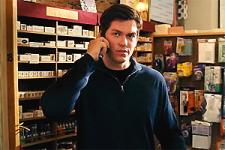 The unfortunate groom who will forever come second to his wifes best friend.

Not to rain on your lesbian fantasy Scott, but Hathaway was the groom when they were kids, not Hudson. I did not picture this a girl on girl love story, but a film version of Laverne and Shirley. Hudson plays the tough Laverne character who bosses her swishy male assistant around. She is marrying Lenny as they both have fun together. Hathaway is Shirley, who discovers at the 11th hour that she no longer loves Carmine, and ends up married to Squiggy.

Bride Wars tries in vain to make you laugh and cry at the same time. Their sabotaging antics are supposed to be funny, but they never generate a laugh. The girls pine for each other’s company, but considering each is so damn selfish about their wedding day, I cared not if they stayed friends.

As Scott wrote, the grooms are no more important than the little groom statue on the wedding cake. Each is treated like a mere decoration. When the wedding coordinator asks the girls if either wishes to discuss the wedding details with their fiances first, they both simultaneously respond, “No.”

The one and only line that stuck out for me was when Hudson notices that her dyed hair is falling out, “I’m going to be a bald bride. This is so not ideal.” I could just picture Laverne saying that as she cried into her milk and Pepsi. 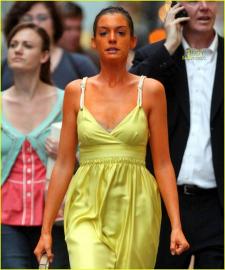 Hilarious this is not.

Sure the male characters are cardboard cutouts but that wouldn’t be a problem at all if the jokes were funny or clever. Movies aimed at men have often treated women as cookie cutter objects to be rescued. Why shouldn’t movies aimed at women turn the tables? It all depends on your point of view after all.

Clearly someone thought up the basic premise for this movie but had no idea how to actually set up and deliver laughs. The acting is decent, especially the climax where Liv and Emma make up at the wedding. A comedy has to be funny in order to make you care about the characters. Since the previous 80 minutes never made me laugh it was hard to conjure any feelings for these two women. OK Kristen Johnston made me chuckle a few times but not enough to recommend this disappointing movie. I think both of my brothers' ideas would have improved Bride Wars. How about a big screen adaptation of Laverne & Shirley where they get married to each other?