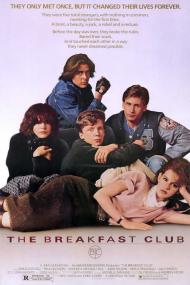 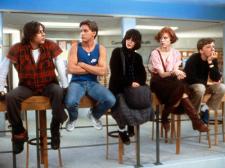 Although I now have a teenager of my own, I can still appreciate the brilliance of this film.

Considering that I have not been in high school in many years, I wondered how I would view The Breakfast Club today. I loved this film when it first came out. It is so attached to the 1980s and features an all white cast of mostly middle class kids from two parent homes. Could such a dated movie still be relevant?

The movie opens with five teenagers being dropped off at their school for a Saturday detention. The adult cynic in me started up immediately. Teachers do not work on weekends. In my school district, they do not even do field trips on Friday because they are afraid it might run long and delay their time off. Janitors are union workers. They do not work on weekends either. All of the parents dropping their kids off are rude or distant. As a parent, I was a bit put off by that portrayal. The teacher, Vernon, supervising their detention is an absolute idiot. This film was not starting well for me as my adult perspective was being offended.

Once the dialogue got started and the five teens began to interact, I began to remember what it felt like to be their age. Much like these kids, I did not like my parents when I was their age. I often felt alone in my thoughts and feelings. This movie is told from their point of view. To them, adults are a mess. Or as Allison puts it, “When you grow up, your heart dies.”

The five students are all walking cliches. There is the princess, the jock, the criminal, the brain and the basket case. Over the course of the day, they argue, swear, reveal insecurities, help each other and even fall in love. By the end of the film they remain their cliches, but only on the surface. They, and we the audience, discover that no matter what your place in society is, there is pressure and hardship. After that day, none of them will look at each other in the same way.

The unique thing about this film is that it does not talk down to teens. It does not condescend or trivialize their problems. From Bender revealing his troubled home life, to Andrew discussing how hard it is for him to live up to his father’s expectations, we see on the surface two very different young men who actually have much in common.

These kids become very honest with each other. How many teenagers can relate when Claire says, “I hate it. I hate having to go along with everything my friends say.” This film stays so true to itself, that they actually admit to each other that they will most likely not be friends after this because they all belong to different social groups.

Although this movie has some very good dramatic scenes it also will make you laugh. From Bender picking on Vernon, to Allison pocketing whatever she can get her hands on, The Breakfast Club works almost as well as a comedy as it does a drama. Anthony Michael Hall, fresh off of Hughes's Sixteen Candles, with Molly Ringwald, has this line when he gets high, “Chicks cannot hold their smoke, dat's what it is.” He uses the same slang voice the following year in Weird Science, during a similar scene.

Although I now have a teenager of my own, I can still appreciate the brilliance of this film. I just had to remember what it was like to be their age. John Hughes understood how this movie may be viewed by adults and he included a scene, that I thought was pointless when I first saw it 20 years ago, but in fact is a message to adults. Vernon asks Carl, the janitor, “What did you wanna be when you were young?” Carls says, “When I was a kid, I wanted to be John Lennon.” Vernon, stuck in adult mode, says, “Carl, don't be a goof. I'm making a serious point here.”

As a last note, I have to give kudos to the theme song. "Don't You (Forget About Me)," by Simple Minds, is one of the all time greatest movie themes. I couldn't help but sing along. 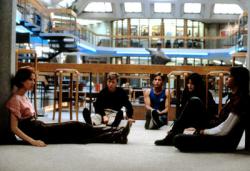 This meeting of the Breakfast Club is now in session.

Eric, I think you are right. The secret to this film is that it is told from the student’s points of view. The only scenes that break this rule are the few short ones between Vernon and Carl. I think it also helps that John Hughes shot it in sequence like a play. This allows the actors to discover the characters they are playing as they go along and likewise get to know the other characters, and for the dramatic arc of the story to build naturally.

The movie opens with a voice over by Brian (the brain) setting the stage, “Saturday, March 24th, 1984. Shermer High School, Shermer, Illinois, 60062. Dear Mr. Vernon, We accept the fact that we had to sacrifice a whole Saturday in detention for whatever it was we did wrong…” The specifics of the details here add to the realism. This is supposed to be a school essay after all.

Perhaps it’s because I was 16 (the same age as the teens in the movie are supposed to be) on that date but I have always felt like an honorary member of the Breakfast Club. But then any teenager who watches this movie probably feels the same way. The clothes, music and slang as well as the cars and look of the school will have extra meaning, however, to anyone of Three Movie Buffs’ generation.

The script is excellent as is the acting. I could still quote much of the dialogue after all these years. Like this line spoken from Bender to Vernon, “Does Barry Manilow know you raid his wardrobe?” Or Andrew to Bender. “Just 2 hits. Me hitting you, you hitting the floor.” And I still don’t know what a Neo Maxi Zoom Dweebie is.

Judd Nelson has the showiest role as “the criminal”. Bender acts tough but is really a scared and lonely little boy underneath. This is most evident in the scene where Principal Vernon threatens him when they are alone. It also shows what a bully this so-called teacher is. Emilio Estevez does some impressive emoting with his reaction looks to what the other students are saying. Ally Sheedy has the one great line that Eric mentioned in his review. It has stuck with me all these years because there is a kernel of truth in it. As adults our hearts may not die exactly but they certainly decrease in emotional sensitivity.

Molly Ringwald and Anthony Michael Hall give the outstanding performances of the movie though. Perhaps this is because they were of high school age at the time while the others were all in their 20’s. Ringwald perfectly captures the stuck-up popular rich girl. The scene where she admits that she will not remain friends with the others come Monday morning is brilliant and 100% truthful. Hall has the movie’s emotional climax when he reveals to the others why he is serving detention. Although I was never a straight “A” student like Brian he was the character I most related too. He also has one of the movies’ funniest lines when he gives his reason for having a fake I.D. “So I can vote.”

Several images from this movie have become iconic, most famously when they are dancing around the library. There isn’t much plot beyond the revelations of why each of them is stuck at school on a Saturday. But this is a character driven movie and the joy in it is getting to know each of them even as they get to know each other (and learn something about themselves in the process).

As it began the movie ends with Brian’s voice over reading his essay to Vernon. Then that awesome theme song kicks in bringing a wave of nostalgia. “Don’t you forget about me…” I won’t forget about The Breakfast Club. 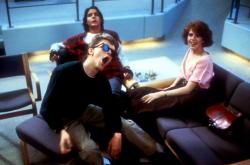 One of the things that makes this movie so brilliant is that while it will always be associated with the 1980s (John Hughes, its brat pack cast , that awesome theme song, etc.) it really is a timeless film.  The cliques represented by each of the characters are still as prevelant today as they were when this movie came out, as they were 25 years before it was released.  I remember wondering why the cliques weren't called nerds, burn-outs or preppies, as they were called at the time, but by avoiding slang terms, as well as the more excessive fashions of the 1980s, John Hughes helped insure that this movie would be watched and rewatched for years to come.  Of course, as Patrick said, while it can be enjoyed by any generation, this movie will always remain more special for those of us who were in high school during the 1980s.

The cast is uniformly perfect, although I do agree that the age difference between the actors does stand out, especially between Judd Nelson and Anthony Michael Hall, although it's easy to believe that Bender might have been held back a few grades.  Each of them perfectly embody their clique and because of their performance combined with Hughes script, we can all see something of ourselves in these characters.  It's impossible to watch this movie and not at least think to yourself which one of them you are/were most like in high school.  Personally I fell somewhere between Brian and Allison.

Hughes was in his 30s when he made this movie and yet somehow he managed to capture the essence of being a teenager.  It's a period when everything is so dramatic and things matter very, very much and parents and adults in general just don't understand how much things matter.  Look at the scene between Allison and Andrew when she tells him that her parents ignore her.  She's built up to this emotional revelation and you're expecting it to be something huge, but it's not physical abuse or abject poverty, it's just that she's being ignored.  A grown up might tell her that things aren't so bad, or that it could be worse or to snap out of it, but Andrew just listens, understands and empathizes.  Hughes remembered and understood what it was like to be a teenager and he was able to translate that onto the screen.

It's also this teenage perspective that explains the portrayal of the parents.  As you say Eric, all of the parents are portrayed as negative, but that's because to the teenagers, they are negative.  And that's another thing Hughes understood; teenagers are incredibly self-obsessed (I know I was).  No thought is given to the pressures or stresses in the parent's lives, because that's not what this movie is about.

What saves The Breakfast Club from being a depressing, angst-ridden afterschool special is the humor.  Patrick, you mentioned the, "So I can vote line.", which I agree is one of the funniest lines.  And Brian gets another one of my favorite lines when Principal Vernon tells them to spend their time thinking about whether or not they want to come back here again and Brian replies, "Excuse me sir, I can answer that right now. That'd be no."  It's something about the way he delivers the line and indeed, Anthony Michael Hall gets many of the funniest lines, but really all of them generate a lot of laughs.

Entertainment Weekly named The Breakfast Club as the #1 High School movie of all time.  I not only agree with them, but no other movie even comes close.