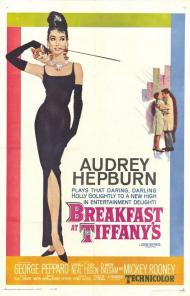 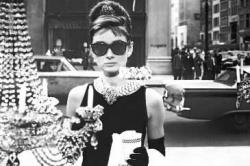 This is one of those movies that has a greater iconic status than it actually deserves and for 2 simple reasons. Number one is the character of Holly Golightly. Audrey Hepburn, Truman Capote and fashion designer Givenchy all contributed to her creation. The second reason is the Oscar winning song “Moon River" written by Johnny Mercer and Henry Mancini. Without these key ingredients Breakfast at Tiffany's would be barely remembered, with them it is one of the most famous movies from the era.

George Peppard plays an aspiring writer who moves into the same Manhattan apartment building that social butterfly and fashion plate Golightly lives in. He is immediately intrigued by this beguiling young woman. She is a young socialite at the center of her busy orbit. Essentially she is an escort for rich lonely men. She uses them to pay her rent and buy her clothes and things, but maintains an aloofness to her feelings. She has a cynical shell but an inner innocence that is incredibly appealing.

The character of Holly as played by Hepburn did create a whole new female type in the movies. Although today she seems quaint, then she was quite daring and liberated for the times. I think this exchange between Holly and Fred sums up her character the best:

Holly: "You know those days when you get the mean reds?"

Fred: "The mean reds, you mean like the blues?"

Holly: "No. The blues are because you're getting fat and maybe it's been raining too long, you're just sad that's all. The mean reds are horrible. Suddenly you're afraid and you don't know what you're afraid of. Do you ever get that feeling?"

Holly: "Well, when I get it the only thing that does any good is to jump in a cab and go to Tiffany's. Calms me down right away."

Although this is a romantic comedy it has a wistful melancholy mood. Holly Golightly is an unhappy young woman desperate for love but claiming she doesn't believe in it. The happy ending always bothers me. I guess it was what Blake Edwards thought audiences wanted but it feels like a copout. Holly Golightly is a classic tragic character and there is no way she will live happily ever after. 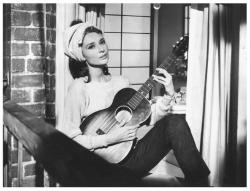 If ever a movie was overrated it is Breakfast at Tiffany's. Hepburn is the one and only bright spot. Her amazing screen charm is at it's greatest in this film. The problem is that it contradicts her character. Golightly is nothing more than a Paris Hilton type social bug looking for a sugar daddy. The paradox of Breakfast at Tiffany's is that the only good thing about it is Hepburn, but she is also the worst thing about it because her character does not ring true. At least not for me. I guess if you want to romanticize a woman of Holly's stature as a sophisticated, even slightly airheaded, as realistic then this movie will not bother you.

The movie changes her character from the book. Capote wrote this story for Marilyn Monroe in hopes that she would star in it. They knew each other socially. Golightly in the books suggests bisexuality and it does not end on the happy romantic note that the movie does. Hepburn's charm was that of a sophisticated nature. It does not go with a woman who is in essence a whore. Monroe's charm was more down to earth (and lets be honest, common). I believe her Golightly would have rang far more true, if less charming.

My other huge complaint about Breakfast at Tiffany's is that damn theme song! What the hell is Moon River about? "...my huckleberry friend. Moon River and me..." Huh?

Audrey Hepburn as the aptly named Holly Golightly, in Breakfast at Tiffany's.

The meaning of the lyrics is hardly complicated Eric. It's a song about drifting through life unattached with the promise of happiness always just ahead. Since the song is sung with such sadness and melancholy, it gives the impression that the happiness the singer seeks will always remain just out of reach.

I don't think this movie is as overrated as you both claim. To me it seems like the Sex and the City of its day. A young, attractive woman lives in New York City. She gets to dress fashionably, live in a nice apartment, never do any work and just generally breeze through life. Is it realistic? Hardly. She never seems to have sex with any of the men she dates. She only has to look pretty and be seen with them.

Because times have changed, today the women of Sex and the City have careers and are free to date and sleep with as many men as they want, on their own terms. Because this movie was released in 1961, Holly's only avenue to happiness is through marriage to a man. She's allowed to want to be free and live a bohemian lifestyle for a while, but until she settles down into married life the movie implies that she we'll never find happiness.

I don't think Holly is supposed to be realistic Eric. It's a female fantasy. Here's a woman who glides through life in fabulous clothes, existing strictly on her charm and good looks. Every man who meets her falls under her spell. What Hepburn manages to do, besides look the part perfectly, is give Holly enough depth and a tinge of sadness so that you suspect there is more to her than what you see on the surface.

I'm not sure I agree with you Patrick that Holly could never find happiness. It might take more than life as a poor and struggling writer's wife for her to find that happiness, but I think it's out there for her somewhere, maybe waiting round the bend.