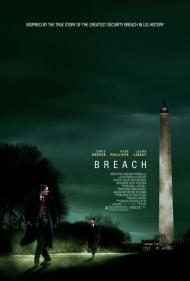 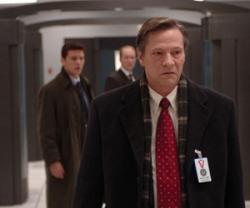 I bet liberal Hollywood could not wait to make Breach. The villain, Robert, is a religious conservative. I have never seen a movie where religion is mentioned so much and the main character attend church so often. Of course the church goer is an obnoxious jerk. He calls someone a fagot and thinks women should not wear pants because, "We don't need anymore Hilary Clintons."

Eric works for the government in surveillance and is trying to make agent, until he gets pulled from his job and goes undercover as a clerk to a veteran agent, Robert. He is, at first, told to spy on Robert because he is a sexual deviant and that his online activities will embarrass the agency. He eventually learns that Robert has been selling secrets to the Russians for years and he is to help accumulate evidence against him.

The movie plays with the two leads feeling each other out. Eric wants to get to know Robert to find secrets. Robert wants to know Eric to discover if he can trust him. The game is who can play their parts better, and who can get the other to give something away.

Robert claims to be very religious and solicits Eric to bring his wife to church with him and his wife. They eventually have meals together and Eric's wife gets freaked out by the whole thing. Eric cannot divulge anything to his wife. She just believes his cover story. Although this is a spy story, the tension of Eric's personal life is just as interesting and integral to the plot. He lives a lie at work and must continue it at home. Like last year's The Departed, Breach shows just how hard living a lie can be.

Breach is moderately paced, but it does serve to add to the level of tension. Every time Eric and Robert interact you wonder what may or may not be divulged about the other. The best scene is when Eric hurries Robert out of the office under false pretenses so as to get to his palm pilot. He then races the clock to extract information from it and place it back exactly where he found it before Robert returns.

The fact that Robert is shown as a sincere catholic only serves to show how far he is willing to lie. According to this movie, he does not pray or go to church as cover. In his mind he is a truly religious person. Of course, we do not know in real life if that was the case, but this movie seems eager to show him as a God worshiping Christian. The last line of the movie enforces this by having Robert ask Eric, after he has been arrested, to, "Pray for me." I do not mind that Robert was a catholic. It just seems that Breach spends far too much time trying to show Robert as a religious hypocrite without even suggesting that maybe his faith in religion is as much a ruse as his patriotism.