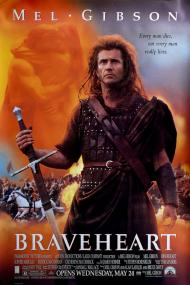 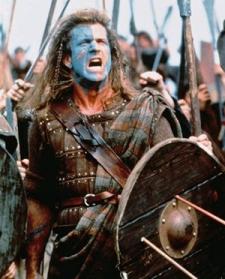 Braveheart is based on some actual events. In the 13th century, William Wallace of Scotland lead a rebellion against English rule. It takes some liberty‘s with history, but it still ends up a very engrossing film.

With the King of Scotland’s death, The King of England, Longshanks, assumed rule over it. This upset the Scottish and war broke out. William Wallace loses his father and brother in battle. He is raised and educated by an uncle. Once grown he sets his eyes on a beautiful girl, who was once a childhood playmate. They marry in secret, as the King of England has put into law that English lords in Scotland are to bed the brides before the groom does. After his wife is assaulted, Wallace takes revenge on the British. This leads to an all out rebellion.

Braveheart is about freedom, and how men will die for it. The Scottish loss of freedom was obvious by the presence of the British. Today, freedom is not lost by a spear but a pen. The government controls our health care and school lunches. It raises taxes with threats of cutting the local police force. It bans smoking in privately owned businesses. Longshanks tried to control Scotland with brute force. Today government controls us by convincing us it is for our own good, when in fact it is for theirs. Wallace says to a noble, “There's a difference between us. You think the people of this country exist to provide you with position. I think your position exists to provide those people with freedom.”

Thus is the greatness of this film. Freedom is the single greatest possession anyone can have. Nothing else matters if you are not free. As Wallace says, “It's all for nothing if you don't have freedom.” The problem is that most of us do not appreciate our freedom until it is lost.

The film is heavy handed in it’s message. If this is your kind of movie, it will no doubt put a lump in your throat when Gibson rides in front of his nervous army and barks, “…they may take our lives, but they'll never take... OUR FREEDOM!” As with most Gibson films, the gore and violence is plentiful.

It's one weakness is the length. It seemed to be about to end several times, only to keep going for 177 minutes. There is plenty of action to entertain you along the way, but too much time is spent on superfluous characters like Robert the Bruce.

The ending walks a tight rope between inspiring and camp. Princess Isabelle, Longshanks daughter-in-law, whispers in his ear, as he lays dieing, that his bloodline dies with him as his son is gay and she is carrying another’s child. We assume it is Wallace’s as they hooked up recently. Wallace is meanwhile being gutted in the public square, the crowd chants for him to say mercy. Instead, he uses his last breath to yell, “FREEDOM!” 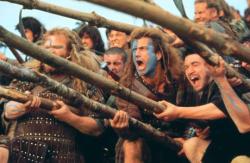 Eric, I’m glad I didn’t read your review before watching this movie as you give away the ending. I know it is 15 years old but I had never watched it all the way through until now. It holds up pretty well and certainly deserved its Best Picture Academy Award. I was moved by the ending. This is a Mel Gibson movie so there is nothing subtle about it but like DeMille before him he knew how to tell an epic story.

The hand-to-hand combat scenes are impressive. Today they would be all CGI but here every battleaxe to the head or sword through the guts looks very authentic. The gore and carnage run rampant but the violence never leaves the realm of reality. These medieval people lived hard, played hard, fought hard and died hard.

The Oscar winning cinematography is gorgeous. Visually the movie has lost none of its power. Gibson, perhaps, overdid the slow-motion a bit and his flowing mane seems strangely shampooed and coiffed compared to the greasy unkempt hair of his fellow Scotsmen. These are but minor quibbles in what is essentially an old fashioned swashbuckling picture with a modern appetite for bloodlust and a high body count. Think The Adventures of Robin Hood meets Rambo.

The nearly 3 hour run time didn’t bother me at all. This is an epic and like the best ones doesn’t seem nearly as long when you are watching it. Gibson is a talented enough filmmaker/storyteller that he keeps the action galloping along and the quiet talking scenes to a minimum. I can, without reservation, recommend Braveheart and declare it a modern classic.