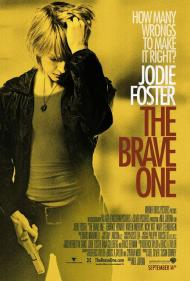 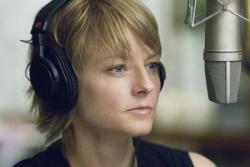 Every now and then Hollywood seems to release two very similar movies at the same time (Armageddon and Deep Impact leap to mind). Such is the case with the recently released Death Sentence and now The Brave One. And as is usual in these cases, one of the movies is far superior to the other and in this case it is clearly The Brave One. This modern update of Charles Bronson's Death Wish is well acted, well directed and for the most part, well written.

Jodie Foster stars as Erica Bain, a New York radio host whose fiancée is killed in an attack in Central Park by a group of drunk gang members. Erica herself is injured quite badly and ends up in the hospital for three weeks. Upon her release she is frightened to even leave her apartment. The Mickey Mouse mask of the "safest big city in the world" has been ripped off and she has glimpsed the darkness that lies beneath. She is finally driven to buying an illegal handgun as a means to feel safer about herself and to give her the strength to leave her apartment.

Shortly there after, coincidentally timed to moved the movie along, Erica is in a bodega when a murder is committed and she ends up murdering the murderer. Emboldened by this act, she soon finds herself seeking out the neighborhoods and situations where she can be thrust into danger again.

On the case to solve these vigilante killers is Det. Mercer (Howard). He has problems of his own, but is soon drawn into Erica's world when they speak at the scene of one of her murders, which she explains away by stating her radio credentials. She briefly uses him to learn what he would look for at a murder site, while he seems genuinely infatuated with her.

It is Foster and Howard's performances that really help this movie rise above just a revenge fantasy. Foster's Erica is very human and while you empathize with her pain, you also see that she is an eye-lash width away from losing what remains of her sanity altogether. Howard's character, while not given the depth that Foster's is, still manages to convey the image of a decent cop, who is also quite human.

There are only a few annoying things about the film. One is the stereotypical wise black woman who seems to be the only other person living in Foster's apartment building. She makes solemn pronouncements (things like 'death is easy, living is hard') and just generally behaves in a way that we've seen from Hollywood films since they started making them. The other problems I had are the couple of coincidences that occur. The first, as I mentioned is the fact that just when Erica's mental stability is at its weakest, she witnesses a murder. The other weak plot point involves Mercer hearing the sound of an elevator ding on the telephone and then being able to recognize that same ding the next day when he hears it in person. I've ridden my fair share of elevators and I have to tell you, you've heard one, you've pretty much heard them all.

One of the few things this movie has in common with Death Sentence is its lack of surveillance cameras. At least at the site of her first killing, Erica is shown taking the video tape from the bodega's VCR, but at none of the other killings does anyone suggest looking for a camera that might have caught a glimpse of the killer, and two of the places, the subway platform and the parking garage, would surely have cameras installed.

I was also unsure how this movie would end. I can't say its ending came as a total surprise, since I figured it would go one of two ways, but the mere fact that I wasn't sure which of those two ways it would go, is saying something for a Hollywood movie these days, where the ending is usually telegraphed to you in the first 15 minutes. 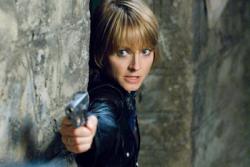 Jodi Foster is completely void of feminine attributes in this film. Even her breast had a body double. The perky breast in the nude scenes certainly do not belong on a forty-five year old woman. I think I would have liked this movie better if it was about a couple of lesbians who got assaulted in the park. At least then I would not have spent the entire movie distracted by how butch she is.

If this movie had actually been entertaining, I may not have been so bored and left to watch how masculine Foster walks, talks and looks. Erica Bain has got to have one of the dullest talk shows I have ever heard. "I walk the streets." Pleeeaaase! That line would only sound interesting coming from a hooker about to tell a story of a sexual encounter.

Erica's relationship with the detective is the best thing in the film. They are two sides to the same coin. Had they just made the detective a woman, their could have had some love interest, and maybe some girl on girl action.

The Brave One will disappear into film history as a Death Wish knock off, when it could have broken some serious ground. Bain should have been a conservative talk show host. They are the only serious radio personalities with any popularity. She should have been a lesbian and the attack should have been an honest to God hate crime. On her show she could have ranted against hate crime laws but then become a victim of one. She could have fallen for the female detective working on the crime and everyone, sans the dead gang members, would have lived happily ever after. Most importantly, we the audience would no longer have to suspend a whole lot of belief that Foster's character actually likes men. 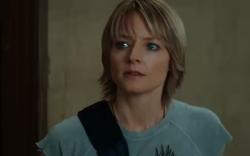 In my life experience I have known masculine acting straight women and ultra-feminine lesbians, therefore I had no problem accepting Erica as heterosexual. I agree with Scott that the acting is good and there are some scenes with genuine tension. Overall, though, the plot is too contrived and the murders are mostly unbelievable in the sense that there are no eye-witnesses. I've done my share of traveling around the city at night and I can tell you that it is extremely unlikely that the gunshots fired in the bodega or on the subway would go unwitnessed.

Most New Yorker's go their entire lives without any serious street violence happening to them. Erica Bain must be the unluckiest person in the city. She finds herself in three life threatening situations in a matter of weeks.

I didn't buy Detective Mercer's actions in the final scene. The morally ambiguous ending leaves the door wide-open for a sequel. The disappointing box-office performance makes that unlikely however.

As for Eric's suggestion that Erica be a lesbian, I would have loved that. In a society that still treats gays and lesbians as second class citizens the title would have had an underlying meaning.