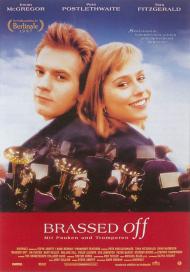 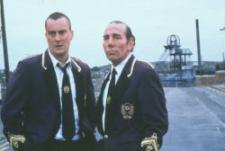 A son, a father and a brass band.

Things are looking bleak in a mining town in Yorkshire, England, as the owners of the pit are threatening to shut it down. It’s closure would mean unemployment for most of the community. A local source of pride is a brass band made up of locals who all work in the mine. The end of the mine would mean the end of the band.

Brassed Off starts as a comedy. The bandleader, Danny, picks up his adult son, Phil, for practice on his bicycle. His daughter in-law angrily throws a plate as they ride off, “She's a bit careless with the crockery, your Sandra!” The bleak future of the mine and the growing debt has caused stress in Phil’s marriage.

An attractive young woman, Gloria, moves back into town and joins the brass band. She begins dating another band member, Andy, who once, “...had her. Behind the bus station.” or at least the “...top half...” when they were teenagers. Things get complicated when Andy realizes that she works for the mining company, “Oy, you're fucking management!” He says to Gloria, who responds, “No, that's what you're doing.”

Things get darker as Danny gets hospitalized, and Phil’s wife takes the kids and leaves him. Phil is one of the most vulnerable male characters I have ever watched on film. Here is a married father, who is about to lose his livelihood, and in the process his wife, kids and personal belongings. On top of all of that, his dad is on death’s door. The scene that choked me up is when Phil is in the hospital, after trying to kill himself, crying to his father. A nurse walks up and asks Phil, “Is this man bothering you?” He answers, “Course he is. He's me dad.”

Brassed Off ends with a big band contest, and lots of politics. At one point, Phil desperate to make money, is dressed as a clown at a children’s party and goes off on a political/religious rant, “He's even thinking of taking my old man. And Margaret bloody Thatcher lives!” He yells, referring to a statue of Jesus. The movie ends with statistics on how many mines in England have been closed, and how many people have lost their jobs. The only thing missing was a Simply Red song.