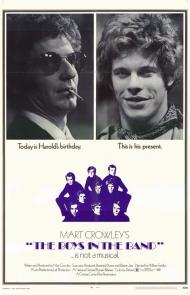 Some of the boys dancing in The Boys in the Band.

The Boys in the Band is historically important as the first modern gay American movie. It was adapted from Mart Crowley’s groundbreaking play that had been the toast of off-Broadway during its 1968-70 run. It played 1,001 performances and the likes of Marlene Dietrich and Groucho Marx were spotted in the audience (on different nights of course). Crowley, in negotiating the screen version, insisted on keeping his original stage cast, himself as screenwriter and the same director. He got everything he asked for except the director. The production company insisted he hire someone with experience behind the camera. William Friedkin got the job.

Boys in the Band is a time capsule of pre-Stonewall gay urban life. It offered straight audiences their first uncensored peek at gay men in their natural habitat. It is filled with memorable characters, witty dialogue, campy humor and hand-wringing tragedy. Ironically, with the birth of the Gay Right’s Movement, the tragic queens and confused closet cases depicted in the movie suddenly seemed passé. So within a few short years Boys in the Band went from being a taboo shattering cutting-edge event to being an embarrassing reminder of the past to the gay community. When the AIDS crisis exploded in the 1980’s it seemed even more dated and out-of-touch. It has only been within the past 10 or 15 years that The Boys in the Band has been restored to its proper place of prestige in the cinematic (and stage) pantheons of gay culture.

The story plays out almost in real time. The setting is a Manhattan apartment, the occasion a birthday party. A group of nine men spend the evening together, gossiping, drinking, getting high, dancing, eating, fighting and playing a psychological phone game. We learn bits and pieces about each of them but never get a fully developed picture of any of them. The cast is wonderful, which isn’t surprising since they had all been living in their character’s skin 8 shows a week for several years.

Michael is the host and the central character. Donald is his best friend and former lover. Here’s a typical exchange between them. Michael, miming a microphone, sings, “Forget your troubles, c'mon get happy! You better chase all your cares away!” Then stops and asks, “What's more boring than a queen doing a Judy Garland imitation?” Without missing a beat Donald replies, “A queen doing a Bette Davis imitation.”

Emory is a flamboyant nellie queen who says things like, “Who do you have to fuck to get a drink around here?” He is the most stereotypically gay character which makes him seem both pathetic and brave at the same time. He’s brought along a male hustler cowboy as a birthday gift.

Bernard is the token black friend from Detroit, still pining for the son of the wealthy white family his mother cleaned house for in Gross Point. He gets one good scene where he calls to speak to his one time adolescent lover during the twisted telephone party game Michael initiates.

Hank and Larry are a couple. Hank is a married father in the process of getting a divorce and Larry a promiscuous cruiser. They spend the evening being jealous of each other’s every move. Alan is the odd man out. He’s Michael’s ostensibly straight former college roommate who drops in unexpectedly from out of town. He hits it off with Hank right away which causes Larry to snub him. In one dramatic scene Alan slugs Emory in the mouth.

Last but certainly not least is Harold, the birthday boy. Harold is the hippest queer in their social circle. He arrives fashionably late and introduces himself thusly, “What I am Michael is a 32 year-old, ugly, pock marked Jew fairy, and if it takes me a little while to pull myself together, and if I smoke a little grass before I get up the nerve to show my face to the world, it's nobody's god damned business but my own. And how are you this evening?” Harold gets the best lines. Apropos nothing he says things like, “Give me librium or give me meth!” And I’ll bet many straight people in the audience didn’t get what he meant when he tells Emory, “Your lips are turning blue. You look like you've been rimming a snowman.”

The multilevel apartment and terrace is put to good use and Friedkin places as many of the actors in each shot as possible. He often shows things from the outsider Alan’s point of view. By the end of the night you feel as if you were a guest at the party and not just someone watching a movie.

The Boys in the Band is now a nostalgic period piece. It hearkens back to a more repressed era when homosexuals were stuck on the fringes of society. It was a time when a campy sense of humor was armor against the underlying tragedy of gay life. As such the movie can be forgiven for being so relentlessly sad and melodramatic. I find it inspiring not just for its iconic characters but for the simple fact that whenever I watch it I think, “We’ve come a long way baby!”