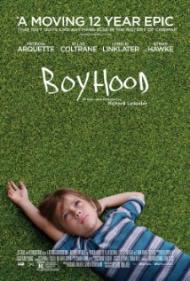 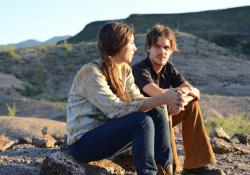 Ellar Coltrane as Mason grows up before our eyes in Boyhood.

Richard Linklater's Boyhood is a 12 year celebration of its title. Filming was begun in the summer of 2002 and completed just last October (2013). This makes Boyhood unique. Over these dozen years we follow one boy's life from first grade to his first day in college. But instead of seeing different actors playing the central character at different ages as he gets older, we watch the same actor grow up right before our eyes. We also see his sister and their parents aging realistically right along with him. It brings a whole new level of realism to the film without seeming in the least bit gimmicky.

The movie begins with a six year old Mason lying in his yard dreamily staring up at passing clouds (see movie poster). It ends with an 18 year old Mason hanging out with his college roommate and two girls. One of whom he's talking to while they watch the setting sun (see photo). The daydreams of a little boy having morphed into a young man's fantasies. In between we see the mundane routines and important milestones in Mason's life play out episodically. His older sister grows up alongside him and we witness the ups and downs of his divorced parents' lives and how their decisions affect the lives of their children.

The entire cast is quite good but Ellar Coltrane gives the breakout performance as Mason Jr. In the early scenes he's a natural, and as he gets older his acting talent grows with him into the part. Lorelei Linklater (Richard's daughter) is adequate as Mason's sister Samantha but she lacks Coltrane's range. Patricia Arquette gives her best performance in years as their mom. She's a smart woman in every respect except when it comes to men. Her poor judgment causing a fair amount of drama in her household over the years. Ethan Hawke makes a great father. His scenes with his children are some of the best. I especially enjoyed the camping trip Mason and his father go on when Mason is about 15.

Boyhood will contain an extra layer of nostalgia for young boys (and girls) who grew up during the same years as Mason and Samantha. But since the themes and milestones of boyhood are universal they give the movie a timeless quality that anyone of any age can relate to. We see Mason's first day at a new school as well as his high school graduation. We see his first sexual awakenings looking at bra ads in one of his mother's catalogs. A few years later he sees his first internet porn. As a freshman he hangs out with a friend and a few older boys and they drink beers and brag about sex.

The relationship between Mason and his father was brilliantly written by Linklater, and sublimely acted by Coltrane and Hawke. Together they experience moments that every father and son ought to share. As a young boy Mason asks his father whether or not there is magic in the world. Mason Sr. gives a response that is above his son's head. Finally he realizes that his son is asking from a place of extreme innocence and trust, and he gives a simple direct answer. A few years later Mason wants to talk about video games and movies. And then comes the age when he first brings up girls to his father. He mentions one girl he likes but when he told her his favorite movies of the year were Dark Knight, Pineapple Express, Tropic Thunder, and Iron Man, she didn't like any of them. Mason Sr. advises his son to ask the girl about herself. And that if he shows an interest in her favorite things, he'll be way ahead of the other boys his age.

Richard Linklater has written and directed some of the most interesting films of the past two or three decades. He has done films that play out in real time like The Tape (2001), as well as his Sunrise series that revisits one couple's relationship every nine years. Like those movies Boyhood combines experimental film-making with traditional storytelling. The result is sublime, and so far one of the best movies of the year. But don't take my word for it. Go out and experience Boyhood for yourself. 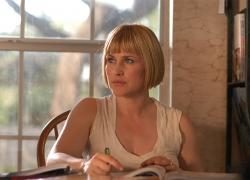 Watching this movie I was put in mind of the probably apocryphal tale of Laurence Olivier telling Dustin Hoffman, after Dustin had stayed awake for three days in preparation for a scene, "Try acting, dear boy...it's much easier." Someone could have given Linklater the same advice. To film characters in a movie aging 12 years, you don't have to actually take 12 years to film it. There's a thing called acting. Of course, without the gimmick (and I disagree with Patrick that it doesn't feel gimmicky) this is just a very long, rather dull, coming of age story.

I also disagree with Patrick that Eltar Coltrane gives a breakout performance. He does a fine job as a child, but the older he gets, the weaker his acting becomes. He is adequate at best. I do agree that Lorelei Linklater's acting is worse, but neither is likely to have much of a future as an actor, at least based on their performances in this film. Even the award buzz that Patricia Arquette is generating for her part here feels a little overblown. She's good as the mother who makes poor decisions, and seems even better compared to the amateurish acting of the child actors, but she's hardly revelatory.

Given that it took 12 years to film, perhaps it's not surprising that Linklater wanted to include so much footage, but at nearly three hours this movie runs far too long. These aren't a particularly likable or even interesting family and nothing out of the ordinary happens to them. As Patrick said, we see a lot of mundane routine in this family's life, with the stress on mundane. I kept wondering what I was supposed to be enjoying about this film and I'm still wondering.

Patrick called Ethan Hawke's character a great father, but again I have to disagree. He has a good relationship with his children, but hardly seems fatherlike, more like a friend or older brother. In fact, the film is shorthanded on positive male role models. Mason's mom is something of a loser magnet and only attracts assholes, but even Mason's male teachers and bosses come across in mostly a negative light. But then, Patricia Arquette's liberal mom character isn't overly positive either. When her fourteen year old son comes home drunk and high, she merely shakes her head and smiles. And the liberal attitude is carried over into several political scenes that I'm sure Eric will mention when he eventually reviews this film.

Nearly every review that I've read of this film points out the unique method Linklater used to film this family's story, referring to the 12 years it took to make, but then they nearly all state something similar to Patrick by saying that it's not a gimmick. But of course it's a gimmick. It's the most unique thing about this movie and the only thing that makes it in anyway interesting. Without that angle, it's just a very long, uneventful film about one very ordinary boy growing up.

Every year there seems to be at least one film generating award buzz that I fail to connect with. Boyhood is definitely that film for 2014. If I ever get the urge to watch a boy growing up on film, I'll just throw on the Harry Potter series and watch Daniel Radcliffe do it over the course of those films. It might not be "art", but at least I'll be entertained. 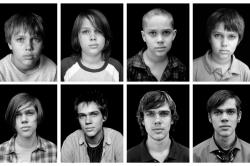 Ellar Coltrane growing up in Boyhood

Of course the 12 years it took to film this movie is a gimmick. I agree with Scott that it is the most unique thing about it. Now, having written that, the story does not play out to remind us of it. There are no captions that tell us the changing year or Mason’s age. We simply get clues that time has passed, most notably by the different lengths of Ellar Coltrane’s hair and Rosanna Arquette’s expanding waist line.

Boyhood does not have a traditional story arc. There is no beginning middle and ending. We are mere observers into this one boy’s life. Over the course of the film we see him question the world around him and he eventually comes to terms with it. Life is full of choices but we do not always choose the moments that we find ourselves in.

I was not impressed with either of Mason’s parents. His mother accepts his drinking at a very young age with barely a frown. His father is good with Mason, as Patrick noted, but he is hardly ever there. His absence is not made up by a yearly vacation. With a mother who is attracted to losers and an absent drug using father who worships Obama, it was no wonder that this boy grew up to be a confused emo.

Speaking of the politics, Linklater has every right to be a liberal sheep but he should have trimmed the politics down. This movie is told through Mason’s eyes, so every time a politically liberal bias comes up it seems interjected for Linklater’s personal reasons. I liked Hawke shouting, “Anyone but Bush.” as that is exactly what we got, an unqualified anyone who has never held a single job in his life. Note that in the movie there is plenty of slamming on Bush while he is in office but after Obama is elected there is not a single compliment given to Obama. Yep, we got an anyone but not a someone worth bragging about.

I found myself caught up in this film as I have sons very close to Mason’s age. Some of the scenes were so familiar I wondered if I had not written them. The father/son conversations about magic, girls and music were near word for word moments I have had with my sons. At one point, Mason acts depressed because his father sold the car that he had previously promised Mason some years before. The father has no recollection of the promise but Mason certainly does. The same thing happened to me when one of my sons reminded me of a promise I had long forgotten about.

In that sense, this film succeeds. Mason comes across as a real person. He is self-centered as people his age usually are. He has awkward stages, with his acne sometimes embarrassingly obvious. We see a boy physically grow while he tries to mentally keep up. We have all been there. Since the dawn of time boys have looked at the world and wondered where they belong in it. Mason is not a unique kid. He is every boy who ever grew up.