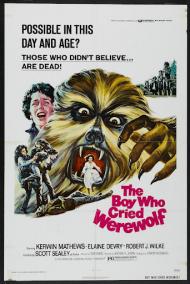 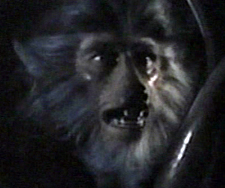 Where once I found it scary, I now found it hilarious, but I enjoyed it both times.

Being that this is my 1,000th movie review, I thought long and hard on what movie it should be to commemorate such a momentous number. I finally decided to go back to the beginning, to one of the very first movies I can remember seeing.

When I was very young my family would often go to see movies at the drive-in. Probably because with 5 kids, it was cheaper to pay by the carload than by the head. I only vaguely remember those times, but what I do remember about them forms my earliest memories of the movies. I recall seeing a Sinbad movie, but only slightly, just the stop-motion skeletons really. I'm pretty sure we saw Diamonds are Forever there because I do remember Sean Connery strangling a woman with her own bra.

Without out a doubt though, the movie at the drive-in that I remember best is The Boy Who Cried Werewolf. It was a double-feature accompanied by Ssssss (a movie's whose classic tagline was "Hiss it, don't say it!"), but although I know Ssssss was about snakes, I possess no clear memories of it. Perhaps it was the second feature and I was asleep by the time it started. The Boy Who Cried Werewolf though, I remember specific scenes and the general plot.

While I was genuinely scared when I saw it the first time, now I found it to be so bad that it's actually quite good. The makeup makes the werewolf look like a fluffy dog that you'd be more likely to scratch behind the ears than run away in fear from. The dialogue is melodramatic and often over-the-top. And oh my god is this movie dated! The hippy Jesus Freaks are proof of that. Their manner of speech is hilarious today and one of my favorite parts this time around.

The story starts with Richie and his dad going up to a cabin in the mountains for some bonding time. Richie's parents are divorced, mainly it seems because Richie's mom had the nerve to want to work instead of be a housewife. While Richie and his dad are walking in the woods, they are attacked by a werewolf. His dad manages to fight off and kill the werewolf, but not before he is bitten and infected as a werewolf. Since the werewolf reverts back to his human form after he dies, no one believes Richie that it was a werewolf that attacked them. This actually was a nice touch, because too often in horror movies people seem to accept the existence of vampires, witches or werewolves very easily.

Most of the rest of the plot is Richie trying to tell everyone that his dad is a werewolf and everyone else not believing it. His dad, as the werewolf, kills a few people and the local sheriff tries to hunt him down thinking that it's just some kind of wild animal.

Although this is supposed to be a horror movie, there's very little horror and even less blood. Instead it is quite funny, most often unintentionally, but occasionally on purpose, as in when the Jesus Freaks believe they can scare away the demon, but then have a very quick change of heart when they come face-to-face with the werewolf.

Most of the unintentional humor comes from the seriousness of the actors. George Gaynes (who would later adopt Punky Brewster) plays a psychiatrist who is very earnest indeed. The rest of the humor comes from just how dated it has all become. The arguments between Richie's parents and the hippies being the most obvious examples.

There were two moments I remembered vividly from when I saw it as a young boy. The first was when the father, as a werewolf, was locked in a shed and was breaking through the door. The mom and the son, on the other side try to get away. I remember being so scared by that scene. The other moment was the ending, which I guess I won't give away, but suffice to say that it made an impression on me. I looked forward to those two moments while watching this time, but must confess they didn't quite make the same impression.

Clearly the seeds of my love for movies were planted early in my childhood at movies like this. We didn't have an overabundance of luxuries when I was a kid, but we always saw plenty of movies. If it weren't for my parents, mainly my father, taking us to see so many, the not-so-good, like this one, along with the good ones, I don't know that I'd be sitting here writing my 1,000th review. So here's to cheesy movies like this one and here's to the next 1,000. 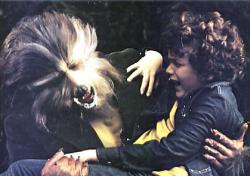 Do any movies ever impact us as much as the ones we first saw as kids?

It was 40 years ago this month that we all piled into our dad's station-wagon to see The Boy Who Cried Werewolf and Sssssss at the local drive-in theater. It was one of the last times we did this as an entire family and, like my brother, I have retained vivid memories of that evening ever since. I remember being creeped out by Sssssss but The Boy Who Cried Werewolf scared the shit out of me.

Today it may seem absurdly cheesy and unintentionally funny but I think it still has the power to scare youngsters. Especially the way it plays into childhood fears and imagination. A young boy discovers his father has become a werewolf but try as he might he cannot get anyone else to believe him. What child wouldn't find that to be a truly terrifying situation?

Like Scott, I was still entertained by this movie. It is dated as hell but also holds up quite well in some ways. The story is good and it jumps right into the action. The first werewolf attack is quite scary and well filmed by B-Movie director Nathan Juran (Attack of the 50 Foot Woman, The 7th Voyage of Sinbad). This would in fact be the final film he directed.

Several scenes stood out in my memory. The most indelible one being the scene Scott mentioned where the father, finally admitting to himself that he's a werewolf, tells his son to lock him in the shed as he is beginning to transform. The boy and his mother then attempt to get away while the father, now transformed into the shaggy beast, tries to claw his way out of the shed. Of course the mother must run back into the house to get the car keys.

Another scene that I vividly remembered was the young newlyweds in their camper. They are probably the two weakest actors in the movie. The werewolf rocks their camper and eventually flips it over and sends it crashing down a steep hill. I can still picture my mother turning to my father in the car and asking, “Would a werewolf really be strong enough to do that?”

Where the original Wolf Man had gypsies this movie has hippies. I agree with my brother that they are quite entertaining in a very 70's way. The boy and his father treat them like street theater with the father promising his son that later on they can stop and “watch” the hippies.

The ending, which I had forgotten, is fairly satisfying and a bit unexpected. Although, like Scott, I had a much different take on this movie now than I did as a young boy it still entertained me. Nostalgia certainly played a large part in that. I mean do any movies ever impact us as much as the ones we first saw as kids? 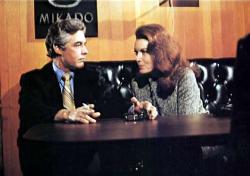 Kerwin Matthews and Elaine Devry in The Boy Who Cried Werewolf

While on a recent road trip with my wife, we came across a drive in movie theater still in business. We had been driving all day so decided we were too tired to stay awake for the double feature. Still, seeing that big outdoor screen reminded me of those summer nights we spent watching, and falling asleep during, the movies my brothers already mentioned. I have to correct Scott though, it was her bikini top and not a bra that Sean Connery choked the girl with. I must have checked out early when we saw this film as the only thing I recalled of it was the opening scene where the werewolf spies on Richie and his dad Robert as they arrive at their cabin.

Although, as my brothers wrote, this is a cheesy “B” movie, it is not all bad. The writing is actually fairly good. Patrick made a nice catch with the wandering Jesus freaks subbing for the gypsies in the original version and is correct that it jumps right in and keeps us interested throughout.

I like some of the scenes that have nothing to do with the werewolf. When Robert drops Richie off at his ex-wife’s house he makes it clear that although they are divorced, he still wants to have sex with her. When Richie begs his mom to let dad stay, he does not realize that he is playing wingman for his father to get laid.

Several scenes later, Robert meets his ex-wife at a bar after she called him. He shows up in a jacket and tie, hoping she has loving on her mind. He is disappointed when she says she wants to talk about Richie’s claims of seeing a werewolf. The best line in the film happens when she tells him that Richie thinks he is a werewolf and Robert responds, “That’s lunacy.” Exactly!

As my brothers wrote, this movie is completely dated but that is not the films biggest flaw. Where this film lacks is simply in production value. Much of the acting is passable at best. The special effects fair no better. This must have been made on the cheap as the sets are limited. Most of the film takes place outdoors or the cabin. There are no establishing shots of the city Richie lives in or aerial shots of the werewolf infested woods. A bigger budget would have meant better actors, sets, effects and an all-around higher quality look.

I am surprised that Patrick did not write about Kerwin Matthews. He had a briefly successful career as an actor who starred in special effects films like The 7th Voyage of Sinbad (1958) and Jack the Giant Killer (1962). He played swashbuckling action heroes in special effects packed fantasy films where he always got the girl. His films were popular with young men and boys who at the time had no idea that Matthews was a gay man in a long term relationship with another man. They were together for 46 years until Matthews’s death at the age of 81. 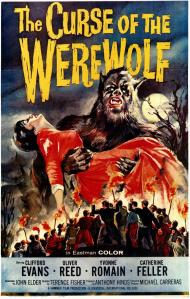 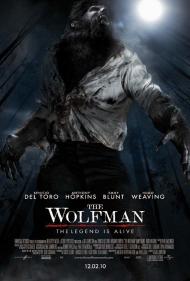