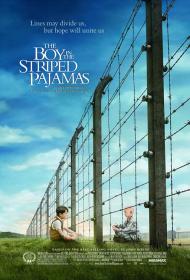 Movies about the holocaust are probably the easiest films to create an emotional reaction from an audience. You have the black booted Nazi bad guys and the Jewish victims systematically being killed. The good versus evil theme is very cut and dry. The Boy in the Striped Pajamas does what few have done before. It humanizes and gives a realistic face to people who have otherwise been dismissed as merely monsters.

Bruno is an eight year old boy happily living in upper Berlin society. His life is carefree and without any concern, until his family has to move due to his father’s occupation. His father is a Nazi officer and he has recently been put in charge of a concentration camp. Bruno only knows that his father is a soldier and that they are now living in a new home. From his new bedroom window he sees the camp in the distance but assumes it is just a farm. One day while exploring the woods he comes across a barbed wire fence and meets a bald boy, his same age, sitting on the other side of it, wearing what he thinks are striped pajamas. They talk and become friends.

Although the novel was told completely from Bruno’s perspective, the movie expands to better include his mother’s awakening to the reality of her husband’s job. The scenes following her realization of what the smoke stacks in the distance are caused by are some of the film’s most dramatic. Her shock of realization, she screams at her husband, “That is not war!” and her eventual complacency is award worthy. Vera Farminga’s performance has already won her The British Independent Film Award for best actress.

In Schindler’s List (1993), the man in charge of the concentration/death camp was nothing more than a demon bent on sadism and murder. Told from the perspective of Bruno, the camp commander is a dedicated soldier who must do his duty to the fatherland. What child could rationalize that his father is responsible for the death of thousands when he so patiently sits with him to discuss moving away from his playmates? His father is by no means portrayed as a hero or saint. After his wife fully understands the camps real purpose, he starts to let his darker side out. One scene has him sitting quietly as one of his officers beats a Jewish house slave to death nearby.

Yes the Nazi’s did some of the most atrocious things to humanity this world has ever known, but they were also husbands, wives, parents and children. The film shows the children being tutored by an anti-Semitic instructor. Bruno watches a propaganda film made at his father’s camp that shows the Jews in it supposedly have it very easy. Bruno’s older sister, under the teachers and a young officer’s influence, buys into the whole Third Reich notion of Aryan superiority and becomes a Hitler Youth. Like the brainwashed Muslim terrorists of recent years, German youths were likewise programmed to hate.

Based on a young adult novel, The Boy in the Striped Pajamas has more characterization and story arc than most mature films I have seen. Even secondary characters, like the young Nazi officer, become more than just bad guys in very little screen time. Although the ending is extremely emotionally manipulative, the irony of it is very powerful.