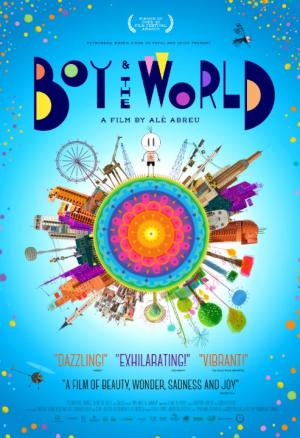 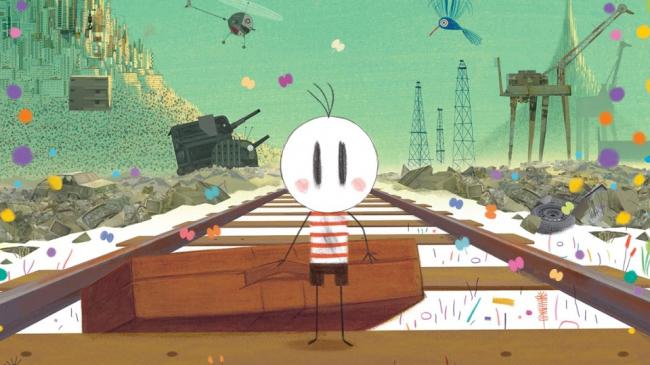 The Oscar nominated Boy & the World.

I always think that for a critic (or any viewer) to accuse a movie of being boring is the weakest form of critique. After all, boring is such a subjective adjective. Some people find baseball boring, while others find it riveting. Very few things can truly be said to be objectively boring, because someone, somewhere will find it interesting or entertaining. The fact that Terrence Malick gets to keep making movies is proof of that. Rather than saying something was boring, it's more accurate to say that a specific person was bored by it. This, of course, is my very round about way of saying that I was oh so incredibly bored by this Oscar nominated animated film that I struggled to get through its brief 80 minute running time. And yet to prove my point about boredom, this same film is garnering raves from others.

This is the second nominated animated film (after Shaun the Sheep) to feature no recognizable dialogue. The entire film is told from the point of view of a young boy who never speaks. A few of the adults do talk, but it sounds like gibberish and is apparently Portuguese played backwards. Truthfully, dialogue isn't need because this is such a simple story that it's easy to follow without any spoken words.

The story begins with a little boy playing in the countryside in a scene that seems surreal, but is quite natural by comparison to what comes later. He returns home to see his father leaving on a train. Apparently he is leaving to find work in the big city. In a couple of sweet scenes, the boy clearly misses his father and so decides to go in search of him. This leads to a series of adventures, that gradually turn into a diatribe by writer/director/animator Alê Abreu against the modern mechanized world. He even throws in a brief scene of actual film footage of forests being torn down and other environmental damage. The little boy's adventures become increasingly surreal and take him further and further from home. Does it all take place in his head? At first it seems so, but the environmental message is obviously coming from the mind of the director and not this little boy.

If you're looking for a contrast to Pixar's computer generated animation, you couldn't get further from it than the animation here. It's extremely simplistic, but has its charms nonetheless. Some of the imagery makes it seem as though it leaped out of the pages of a children's book and is quite beautifully done. Granted, other times it looks like something an actual child might draw, but in any case, it definitely proves that you don't need millions of dollars, teams of animators, and super computers to tell a story.

Despite not being a fan of this film, I do always like one thing about the Best Animated Feature category of the Oscars. The Academy is much more adventurous with these nominees than they ever are in the other categories. Year after year you see small art house, foreign language films like this one go up against the big budget Hollywood cartoons. It's a rare chance for movies like this to get wider attention. I don't always enjoy them, but I do appreciate them.