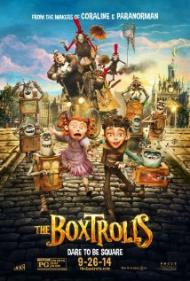 The Boxtrolls is the third stop motion animated feature film from the Laika studio following Coraline (2009) and ParaNorman (2012). All three of which have been nominated for the Best Animated Feature Oscar. As with those previous films, the look of this one is quite impressive. Visually, this is the animation to beat, but the story, while harboring an interesting idea, lacks that special spark that might have made it a classic.

The story is set in the fictional town of Cheesebridge in the year 1805. An exact position isn't given, but it appears to be an old European town. The population believes they are plagued by a breed of trolls known as Boxtrolls because they all wear boxes, using them like a turtle uses its shell. The Boxtrolls do exist, but contrary to popular belief, they aren't bloodthirsty monsters who steal children, but simply shy little builders who live in a cavern beneath the town. At night they scavenge for parts in the town's garbage.

Ben Kingsley voices Archibald Snatcher, the villain of the piece. He's a sniveling little social climber who yearns to join the town's ruling elite and wear the White Hat that marks their office. He makes a deal with Lord Portley-Rind that if he can catch and kill all of the Boxtrolls then the Lord will give Snatcher a White Hat. Working with Snatcher are a trio of bumbling henchmen, voiced by Richard Ayoade, Nick Frost, and Tracy Morgan. Their mission to rid the town of the trolls takes 10 years, long enough for young Eggs, a boy raised by the Boxtrolls, to grow from a baby to an adolescent. It's Eggs who hopes to put a stop to Snatcher, aided by Lord Portley-Rind's daughter Winnie, voiced by Elle Fanning.

Although the animation is highly detailed and beautifully rendered, the filmmakers have populated the film with grotesqueries. All of the adults in town are quite hideous, with Snatcher being the most hideous and his cheese allergy makes him even grosser. The trolls, while friendly little creatures, are also quite ugly, particularly when they are snarfing down insects and slugs, their diet of choice. Eggs and Winnie are almost the only two characters not to be rendered in an ugly manner, but Eggs gets one of the grossest scenes when he shovels cheese topped by a bug into his mouth, before regurgitating it and then eating it again. Winnie, while a pretty child on the outside, is one of the most bloodthirsty members of the town. She is actually disappointed when she meets the trolls to discover that they don't want to eat her face off. She exclaims, "Where are the rivers of blood, and the mountains of bones? I was promised rivers of blood!"

While the story is reminiscent of an old fairytale, it lacks heart. I was never very emotionally invested in the story's outcome. Likewise, the humor, while occasionally chuckle worthy, is never laugh out of loud funny. The idea is a good one, the animation is fantastic, the voice work first rate, but the script feels weak. Laika definitely know how to make highly detailed animated films that look amazing, but they could use stronger writers. 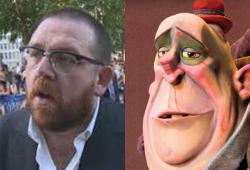 The Boxtrolls do more than just scavenge for parts in the town's garbage. The trolls are outright thieves stealing wheels from wagons and signs hanging in front of businesses. Although they are mostly harmless, they are quite a nuisance.

As Scott wrote, some of the humor is on the grotesque. The cheese allergy is disgusting but so is the multi-troll nude scene. The movie is not adult but some jokes stretch the limit of good taste. Snatcher likes to cross dress and act like a diva. In one scene, Eggs scratches his crotch only to be scolded by Winnie, “No! You don't scratch there in public. That's why they're called privates.”

My favorite jokes were provided by Nick Frost voicing the big lug, Mr. Trout. He comes across as a moron but likes philosophy. When catching Boxtrolls, he asks Mr. Pickles, “Do you think these Boxtrolls understand the duality of good and evil?” Later when discussing what a captured Boxtroll is thinking, Mr. Trout offers, “I imagine they are evaluating their life choices.”

What separates this film from being just an ordinary children’s film is its allegory to Nazi Germany. The trolls hide like Jews being hunted by the Gestapo. Snatcher spreads propaganda about the trolls like Joseph Goebbels convincing the German population that Jews are evil and need to be feared. When captured, the Trolls are sent to work as slaves in a factory. At the end there is even an attempt to kill Egg in a furnace of all places.

The Claymation makes for a fascinating watch and the pace is adequate. The script provides some laughs and Snatcher’s song, sung in drag, is well done. However, as Scott noted, it lacks a sincere cheer along theme. I do not see The Boxtrolls having a very long shelf life.

Boxtrolls in The Boxtrolls.

As much as I applaud the painstaking effort it takes to create these stop-motion animated movies, I have to agree with Scott that the storyline in The Boxtrolls fails to live up to the impressive quality of the visuals. And, in what seems to be a trend, it includes several gross-out moments that seem more appropriate for a raunchy frat-boy comedy than for an animated kids' movie. The cheese allergy scenes are seriously disturbing, and Eggs eating his own regurgitated food is completely unnecessary and not the slightest bit funny. I guess this is what you do when you can't write clever dialogue.

You can certainly draw parallels between the treatment of the Boxtrolls in this film with the treatment of Jewish people in Nazi Germany. Archibald Snatcher shares many personality traits with Adolf Hitler (I wonder if the Führer ever did drag?). However, it could also be considered a bit insulting to compare a group of humans to these ugly, sticky-fingered, little subterranean creatures.

At any rate, the plot is unoriginal. It follows the same worn out path that nearly every big budget animated movie follows. And, in another unfortunate trend of modern animation, it runs at least 20 minutes too long with several false climaxes on the way to its cookie cutter conclusion.

I wish they had done more with the idea of Eggs thinking he's a Boxtroll. They could have played with the fish out of water concept more than they did. His being raised as a Boxtroll reminded me a bit of Mowgli being raised as a wolf in The Jungle Books except that Alan Snow is no Rudyard Kipling, and Laika can't compare to vintage Walt Disney Studios by any stretch of the imagination.

I'm certainly not the target audience for this movie. I despise most modern cartoons – although to be fair I did enjoy ParaNorman. Why is it that our ability to tell well-written, character driven stories seems to lessen while our technology that allows us to create incredibly sophisticated visual worlds increases? Foreign animation studios don't have this problem. Take Ireland's Song of the Sea, which is up against The Boxtrolls for the Oscar. It has a quaint visual style but it tells a wonderfully engaging tale without bathroom humor or vomit. American filmmakers please take note.