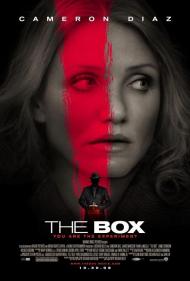 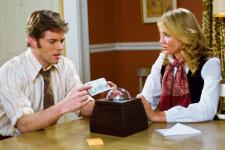 The Box is based on the short story, "Button, Button" by Richard Matheson. It was an episode of "The Twilight Zone". Matheson has written such great work as Somewhere in Time and I am Legend. With that in mind, I was excited to see this film. However, the screenplay was written by, and the movie directed by Richard Kelly, who wrote and directed the utterly confusing Donnie Darko. What was a simple tale of morality and choice is now an elaborate science fiction film, full of symbolism and WTF editing.

Norma and Arthur are a happily married couple living in a nice home in a nice neighborhood in 1976. They have a healthy, normal son, Walter. Norma is a teacher at a private school, that Walter attends. Arthur works for NASA. He helped develop the camera that took the first pictures on the surface of Mars. Arthur drives a hot Corvette Stingray. As is human nature, they still want more, but how badly.

One morning a Box with a button on top, is dropped on their doorstep. They are paid a visit by a mysterious man who informs them that if they push the button they will receive one million dollars cash. However, someone they do not know will die.

It is a test. Is your greed greater than your conscious? Simple enough, right? Kelly obviously did not think so. To pad the short story to feature length, he involves alien influence and all kinds of special effects. What we eventually learn is that some aliens from somewhere, possibly Mars as it is talked about often, are testing random humans to see if mankind is worthy. Why they are doing any of this is never explained.

Things happen in the movie that are impossible to explain. People transport through water. Their son is made blind and deaf instantaneously. To cover these and other happenings, Kelly includes this quote from Arthur C. Clarke, "Any sufficiently advanced technology is indistinguishable from magic." So there you go, all of the plot holes are explained by saying it is just to technical for us to understand.

Symbolism and allegory are throughout the film. Norma is the one who pushes the button. You can say she is Pandora. You can also draw comparisons to Eve pulling the forbidden fruit from the tree. The aliens testing mankind is God like in that based on a choice they either get to go to heaven or hell. At one point, Arthur has to decide on a path, with one leading to eternal damnation.

The Twilight Zone version posed a question, with the answer revealing the true nature of a person. It ended with the shocking line that the messenger would be giving the box to someone who does not know them. It implies, of course, that they may now die because someone else will have their life in their hands. What decision would that next person make?

The point of the story is free will. However, Kelly lost some of that with his additions. Before they decide on pushing the button, Norma is informed by the school that they are cutting the teacher discount, and she would now have to pay full tuition for Walter. Arthur is meanwhile turned down for a promotion. The movie reveals that these events are manipulated by the aliens. Although those occurrences do not take away their freedom of choice, it is hardly fair play on the aliens part. You cannot guide a sheep into a pen and then say he did it of his own free will.

The television episode is very simple and direct. It does not matter where the box came from as the point is the decision, not the circumstance. Kelly disagreed and thus the point of the story gets a bit lost. Much like the film adaptation of I am Legend, The Box shows that less can be more. Also like Legend, the ending is a complete loss. It is closer to the original story, and if you know Matheson's work then you know it is not a happy one. 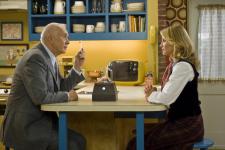 Frank Langella and Cameron Diaz in The Box.

To be fair to Richard Kelly the story "Button, Button" doesn't really lend itself to a feature length film. It needed something added to the plot to stretch it out. Having said that though, the story certainly didn't need a plot so convoluted that it would make even Fox Mulder do a double-take. The original short story is, as you said Eric, a simple morality tale with a chilling ending. Where the box came from isn't important. It's about choice and consequences.

At least with Donnie Darko you could ponder and debate the meaning of it all. After watching it I had the feeling that it all meant something, even if I didn't quite understand what that was right away. With this movie, it's hard to even care what it all means and after watching it I was pretty sure it didn't mean anything at all. Like Frank Langella's mutilated face for example. What's the point of it?

Marsden and Diaz do adequate jobs in the lead roles, but the characters they play are fairly unremarkable not particularly likable. Diaz pushes the button but it doesn't seem like she really believes anything will happen after she pushes it, which completely destroys the story. The whole movie takes place in Virginia and Diaz does a southern accent, which is fine, but practically no one else does, which kind of makes you wonder why she bothered.

This is a story that never should have been made into a movie and most definitely not this one. 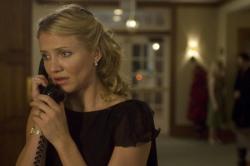 Cameron Diaz in The Box.

As an adaptation from a short story it’s not so bad. The premise is intriguing but I thought they would stretch out the time before Diaz pushes the button. I remember thinking it’s less than 40 minutes into the movie and she’s already pushed the button. Isn’t this where the story ends? Instead we get a vaguely defined sci/fi extravaganza with quasi religious overtones. It steals some ideas from The Day the Earth Stood Still, i.e. violent humans being judged by an alien intelligence.

Scott, you asked what the point of Frank Langella’s mutilated face was. I thought it was so that Diaz’s character, with her deformed foot, could bond with him as she does in the scene at the library where her husband is deciding which wall of water to enter in order to determine the destiny of his soul (nothing unusual about that). I believed that her response to his question of what she felt the first time she saw his face (she tells him she felt love) saved her husband and enabled him to choose the right path. But the ending of the movie made me scratch that idea as well as scratch my head.

Oh yeah, and I too wondered at Diaz’ over-done Southern accent. I was never bored by Box but it most certainly is a WTF movie.