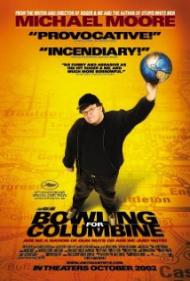 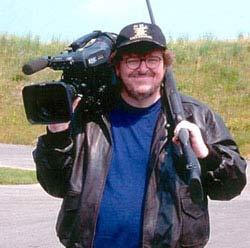 Michael Moore is back with a new documentary film. Bowling for Columbine examines gun violence in America by focusing on the most infamous of all the high school shootings and takes its name from the last known activity of the two teenaged killers. Over the course of the film he looks at such influences as the media, pop-music, the NRA, and the way that the Federal Government wields our military. He interviews (or in some cases tries to interview) such notables as Charlton Heston, Dick Clark and Marilyn Manson.

The main premise of the movie is to find out the reason why handgun murders are so much more prevalent here than in any other developed nation.

Is it because our military uses violence as a justifiable means to an end? April 20th 1999 (the day of the shooting) not only happens to be Hitler's birthday, but also the exact day that President Clinton ordered the heaviest bombing of the entire conflict in Kosovo. But then again Italy, Germany, Japan, Russia and Great Britain all equal or surpass us in terms of having a violent military history, yet none of them has a fraction of our murder rate among its private citizens.

Perhaps it's the logical result of the shear number of guns owned here? Maybe, but then again, Canada, our friendly neighbor to the north, contains more than thirty million privately owned guns yet suffers less than 200 shooting deaths a year compared to the more than 11,000 we had last year. What gives?

OK it must be pop culture then. You know, all of that violence on television, in the movies, in video games, on the internet, even in pop music. Clearly this country is saturated with it. But guess what? In Canada they watch the same movies, play the same video games, listen to the same music and surf the same internet that we do.

As it turns out there are two important differences about us. The coverage of violence in our media, in particular televised news, and the level of fear among the populace that it feeds off. According to statistics violent crime has dropped twenty percent in the last ten years. During this same time period, however, news coverage of violence has increased by 600 percent. To drive home his point about the mindset of fear which we suffer from in the United States Moore interviews a group of Canadians at a bar. Many of them admit to gun ownership and the fact that several of them have had their homes burglarized. The kicker is that none of them lock their front doors. They're not afraid. He even goes to a typical middleclass neighborhood and - unannounced - tries opening front doors. Not one that he encounters is locked!

Michael Moore is a card carrying member of the NRA. He is a Michigan farm boy. Still he is not afraid to question certain tactics employed by this powerful organization. Why did they show up in Columbine within several weeks of the shooting to hold a rally which included a 'Patriotic' appearance by old Moses himself, Charlton Heston? Then when a six year old boy in Flint Michigan made national news for shooting a six year old girl in his class, the NRA showed up there as well almost immediately. Again with Heston in tow. The interview shows that the legendary actor may be more of a pawn than anyone realized. He shows little remorse but plenty of confusion and doddering about. It is quite possible that he didn't even know where he was half the time. Still it is a sad, sad moment.

At times depressing, often amusing, Bowling for Columbine is powerful and thought provoking. 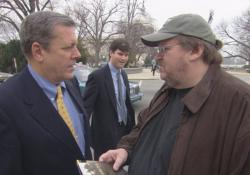 I recall a sketch from Monty Python's Flying Circus called 'Dead Bishop On The Landing'. The characters in the skit want to know who killed the Bishop. At the end of it someone says 'Society is to blame.' Then another character says, 'We'll arrest them too.'

Bowling For Columbine is the epitome of Liberalism. Blame someone or something else for a problem. It is typical liberal logic. 'It's not your fault you have two children from two different men that never made a commitment to you. It is societies fault for not handing out condoms at your school, so us liberals are going to take money from people who work for a living and give it to you.' Or this latest one. 'It's not your fault that you are fat. So let's sue McDonalds and take soda pop out of the school cafeterias.'

In Columbine, two boys made the decision to kill. They obtained the weapons. They manufactured the bombs. They pulled the triggers. Michael Moore, in typical Liberal fashion, chooses to point the finger at the usual liberal escape goats, rich white men.

Lockheed and Martin manufacture weapons of mass destruction near Columbine, so according to Moore, they must share some of the blame. As Patrick mentioned, Moore also blames pop culture and the media. Also I agree with Patrick that the part about Canada was very eye opening. America is a land full of paranoid people.

This film is so agenda oriented that I couldn't help but cringe when Moore uses past military action by the U.S. to make a point. He shows 5 second clips and a one-sentence description of each event. Each event would need its own documentary to explain why it happened. Moore's quick description makes it appear as if the U.S. was just a spoiled child that occasionally threw violent temper tantrums.

The interview with Heston was a grotesque ambush. Moore gets in good with Heston by showing him his NRA card and then hits him with questions Heston obviously was not prepared for. Moore ends the interview by asking him if he would like to apologize to the people of Flint Michigan for appearing at a NRA rally shortly after a 6-year-old shot another 6 year old. Why doesn't Moore go find the uncle who provided the child with the gun and ask him to apologize? But, that probably would not make a good documentary, would it?

Moore spends this entire movie blaming everyone he can think of. Never does he actually suggest that the boys or their clueless parents may have some responsibility in the killings. Moore points the finger at a society and a media that thrives on violence. Does this mean Michael that a rapist should get off (pardon the pun) because he was bombarded by sex in the media?

As I meet more and more fathers I find that so many of them are conservative in many ways. I don't see how a decent father can be a true consistent liberal. Most fathers understand that one of their most important jobs is to instill a sense of responsibility in our children. According to liberals like Moore, we are not to be held accountable for our actions. Moore blames K-mart for selling the bullets that the two boys used.

This documentary argues its point with great detail. I am just not of the same mind set as Moore. This country has millions of people in it who all make countless decisions each day. It is the weakest of excuses, blaming someone else for our bad choices. 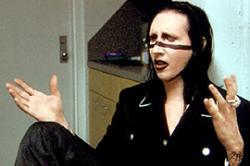 Marilyn Manson in Bowling for Columbine.

Under normal circumstances, I would describe my and my brother's politics in the following manner. Eric is conservative, Patrick is liberal, and I am moderate. However, after watching Bowling for Columbine, I find myself in 100% agreement with my brother Eric.

Apparently, in Michael Moore's world, only large organizations can be guilty of crimes and only crazy people or bastards own guns. The government is bad. The media is bad. Big corporations like K-mart and Lockheed Martin are bad. Dick Clark owns a restaurant where a single mother (whose 6-year old son shot another child with his uncle's hand gun) worked. Who's to blame in this situation? While it seems to me that it falls on the Uncle who left a gun where a 6-year old could find it, to Michael Moore it is the government of Michigan for forcing this single mother to work and Dick Clark for owning the restaurant that hired her. Not to mention that early on in the documentary Moore makes the statement that poverty can have little to do with the crime rate since Canada has a much worse economy than the United States. Well then, why does he go on for ten minutes about how poor the mother of this child is?

Being originally from Michigan, I've known many people who owned guns and all of them were ordinary, quite sane, law-abiding citizens who used their guns for hunting. Nowhere in this documentary did I see Michael Moore interview any of these sorts of people. Instead, he interviews only extremists such as the Michigan Militia and people who strap a gun to their dog. His argument is so completely one-sided that even though I agree with him in principle sometimes, I kept waiting to hear the other side of the debate, but of course never did.

After watching the movie, I discovered a website (http://www.bowlingfortruth.com), which does offer the other side of the argument. Moore is just as guilty of pushing his own agenda as he accuses the general media of being. You should at least get to hear opinions from the other side so that you can make up your own mind without Michael making it up for you.