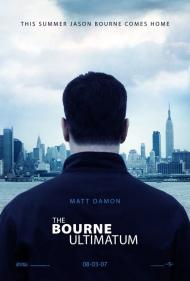 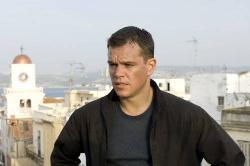 I admit I was a latecomer to the Bourne party. In my review of the The Bourne Identity I was very harsh. By the time The Bourne Supremacy came out however, the series had won me over. In preparation for watching this, the latest in the series, I went back and re-watched the first two movies.

I don't know if I was in a bad mood the day I reviewed The Bourne Identity, or if it was because I had just read the book too recently before seeing it or what, but nearly everything I wrote in that first review is completely wrong (Okay, well all but one thing. It still bugs me that he's able to travel across Europe at the beginning of the film with no papers). The Bourne Identity, The Bourne Supremacy and now The Bourne Ultimatum, make for one hell of a movie trilogy.

Damon is back as amnesiac super-assassin, Jason Bourne; the role that catapulted him onto the A-list and out from under Ben Affleck's shadow. If you remember the ending of Supremacy, you'll remember that it ended with Bourne in Moscow, apologizing to the daughter of his first targets, whom he'd killed in Berlin, years ago. That movie then had an epilogue in New York where Bourne has a phone conversation with CIA agent, Pam Landy (Allen). This movie rather cleverly picks up with Bourne in Moscow, right after the apology and then has the phone conversation in New York take place about two-thirds of the way through the movie. I've certainly never seen a sequel tied to its predecessor this way before and it works great.

Although there is lots of action and lots of cryptic espionage conversations, the movie is surprisingly light on plot. It simply picks up right where Supremacy left off. The CIA, despite Landy's claims to the contrary, still sees Bourne as a threat and so want him eliminated. Bourne wants to stay alive and discover who he really is and how he got to be this killing machine. Bourne's quest takes him from Moscow to London to Madrid to Tangier (and probably some other places I'm forgetting) until finally he ends up back in New York for the movie's climax which includes another bone crunching car chase.

After re-reading our reviews of the earlier movies, particularly Supremacy since Greengrass directed that one and this one, I think I can pretty confidently state that Eric will like this one as he liked the earlier films and that Patrick will dislike it, as he did the earlier films, and for pretty much the same reasons. Sorry to tell you Patrick, it contains the same hand-held camera movements (possibly even more this time around) that so annoyed you. And Eric, Damon continues to downplay his character, using the least amount of dialogue since maybe Mel Gibson in The Road Warrior. And his Bourne remains a very human character, despite his almost super-human survival skills. He's almost an android when in action, but somehow you always know there's more to him than that.

The fact that I had just re-watched the first two movies certainly helped me follow the story and pick up some of the background nuances, so I would recommend watching them again before this one if you can. Who knows, like me, you might change your mind about them completely. (And yes Patrick, I'm mainly talking to you) 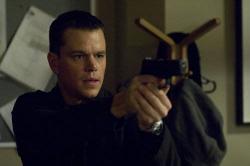 Paul Greengrass is the greatest director for creating and maintaining tension in a film. Many action movies are made and released, but how many actually contain scenes where you truly fear for the characters? I liked Live Free and Die Hard but I never truly felt John was ever in real danger. The Harry Potter films can be exciting but you always know Harry and company will come out smelling like roses by the end of the school year.

In The Bourne Ultimatum, Greengrass grabs you by the balls from the first scene and doesn't stop squeezing until the credits roll. The most intense moment comes when Jason has to race back and try to save Nicky from an assassin. It involves a motorcycle chase. A foot chase through the street of Tangier, a chase on rooftops, a chase through some apartments. This extended action sequence never tires. It not only keeps a consistent taunt mood, but builds the tension as it goes to a climactic fight scene.

Even the movie's one flaw can be overlooked because it comes at such an exciting point in the film. Jason has just broken into a secret CIA organization head's safe. He could have just walked away with his discovery, unnoticed, but instead phones the CIA boss from his very office and asks, "Where are you now?" The boss responds, "I'm sitting in my office." Jason proves him a liar by responding, "If you were in your office right now we'd be having this conversation face-to-face." As Scott said to me, it is a cool line, but it is a stupid thing for someone to do whose greatest asset has been to survive.

Julia Stiles continues to tease as Nicky Parsons. In all three Bourne movies, she comes and goes quickly. In the last two films she has provided a level of emotion left empty by the death of Bourne's girlfriend. In this film she hints that Bourne and she had some sort of past, but it never elaborates. Bourne's past comes to light, while Nicky's remains an enigma.

The movie sets itself up for a possible fourth movie. As long as Greengrass is available to direct it, I hope that another installment is in the works. 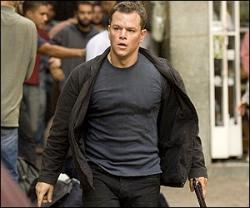 I still haven't seen The Bourne Identity but I must admit I enjoyed Ultimatum more than I did Supremacy. I was still annoyed by the distracting hand held camera work but the action is taut from start to finish and Damon's amnesiac super spy has grown on me as a movie hero. But isn't it a bit unlikely that he would be unable to remember anything about his identity yet still be able to function as this incredibly efficient killing machine? I mean he remembers everything he was taught in spy school but nothing about his personal life?

I agree that Paul Greengrass knows how to direct tense action scenes. For the most part this movie avoids being ridiculously over-the-top in the action department. Something that most modern action flicks cannot claim. And the entire movie is nearly one long action sequence. It is relentless yet compelling.

It helps that the supporting cast includes such talented thespians as David Strathairn, Joan Allen and Albert Finney. They are all a cut above your typical actors found in most summer blockbusters. This blue collar Bond lacks that franchises traditional glamor, romance and impeccably tailored suits. Damon remains a cipher as Jason Bourne. He's the hero yet it doesn't really feel like his movie. The supporting cast gets most of the dialogue.

As pure mindless bang-bang entertainment The Bourne Ultimatum succeeds. This might be the ultimate Jason Bourne movie but it's just not my cup of tea and never will be. Oh and I agree about the scene Eric mentioned.  It provides Bourne with a memorable bit of dialogue but it makes no sense story-wise. 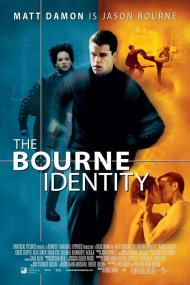 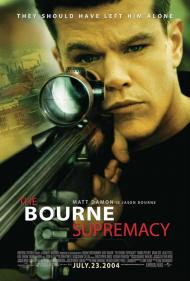 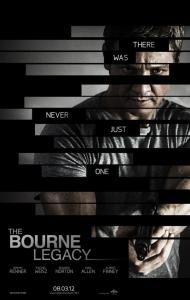 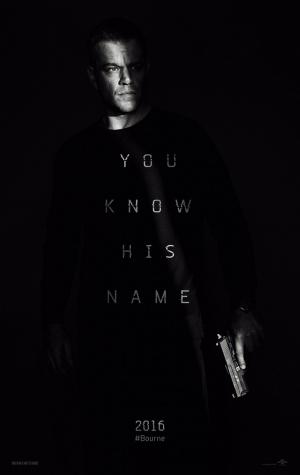