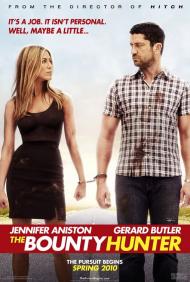 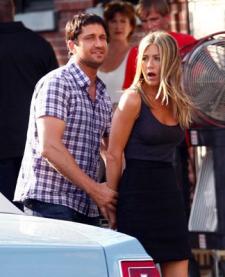 Gerard Butler and Jennifer Aniston got paid to have fun. I paid, and was bored.

Other than her role on Friends, the best thing to happen to Jennifer Aniston's career was her marriage and divorce to Brad Pitt. It has been her only connection to the A-list of Hollywood. Once Brad Pitt left Aniston for Angelina Jolie, she became the victim of a home wrecker and an disloyal husband. The tabloids portray Jolie as a man-eater, and Aniston as the girl next door. Unlike her actual movies, the gossip of her romances and breakups have kept her a vital movie star.

Recent case in point is The Bounty Hunter. Aniston and Butler spar as a recently divorced couple who spend time together, as she has jumped bail and he is hired to bring her in. There is little chemistry, and even less spark between them. The movie is set up to have the two fight, argue and lie to get one up on the other. Both actors are playing such one dimensional characters that I never cared what happened to them. Both of course still have feelings for each other, but their careers got in the way....blah blah blah. Although the journey has some shootouts and a mystery to solve, you know exactly where it will all end.

Aniston is a vacuum. She sucks all the life out of her movies. All these years later she is still playing Rachel. She is no longer the ingenue. She is past middle aged, yet she is still playing that romantically confused hot chick, that America fell in love with on television more than a decade ago. Even my 14 year old's first reaction was that, "She looks old." Like all of us, Aniston has aged, but she has never grown as an actress. As such, we never see a character on screen, we just see Aniston desperately trying to have a hit movie.

To be fair, this is not the best written film either. Aniston calls her mother, before deciding whether or not to sleep with her ex-husband. Baranski in a cameo to help put some life into this movie. When Aniston and Butler revisit the hotel where they spent their honeymoon, the proprietors gush over how much they remember them, because they were just the most in-love couple they ever saw. Of course the movie never says why they thought that. The worst plot device is the ridiculous murder/drug mystery. A mere phone call to their best friend would have settled it all.

The romance is weak, and the comedy is sparse. Fallon was the only bright spot in last years dreary, New in Town, and has the best line here. When telling Butler that his boss has gone camping she says he is probably, "...trying to start a fire with two sticks and pure rage." It is never a good sign when a supporting cast has the most memorable line, and it's not that memorable.

Butler is a man's man, and he is playing his stock character here. At least he has action films to fall back on when he finally realizes that he is not meant for romantic comedies. Aniston on the other hand has only her tabloids to help her get through to her next box office bomb. If you think I am being to hard on her then name one film in which she actually contributed anything to that another actress her age could not have? She should actually send Jolie a thank you note for taking Pitt. First because he is obviously a dirt bag for having an affair, and second because it gives her more attention than any of her movies. 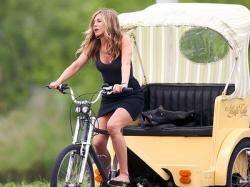 Jennifer Aniston in The Bounty Hunter.

Eric, you're way too hard on Jennifer Aniston.  The things that are bad about this movie aren't really her fault.  There's not an actress alive who could have made this movie entertaining, unless maybe she was also given the opportunity to rewrite the entire script and change directors.  There's no life in this movie for her suck out.  It's already dead.

It's true that Aniston doesn't have the best track record when it comes to movies, but I've always seen that as a really poor choice of films rather than a lack of talent.  Granted she's probably never going to win an Oscar (although stranger things have happened) but she's still a very attractive woman and has an inherent likability about her.  She just either needs to get a new agent or she needs to stop picking movies herself.

Butler is completely miscast as the romantic lead.  He's another who ends up in bad movies.  He was horribly miscast as the Phantom in Phantom of the Opera and he seems only suited for action movies.  He shares zero chemistry with Aniston (ironic considering they were romantically linked in real life) but then the script doesn't really give them the opportunity to demonstrate any.

The plot and the mystery are very weak as you say.  In fact, the journey they go on makes very little geographical sense.  Nicole is wanted in New York City for her traffic offense, so why then does Milo pick her up and drive her to Atlantic City?  This isn't just nitpicking, Atlantic City is the entire length of New Jersey away from NYC, so I think I'm justified in pointing this out.  The script needed them to be far enough away from the city so that they could go on a journey together obviously, but they couldn't even come up with one that made sense.  The constant reasons given for stopping so things can happen are increasingly ridiculous.

You have to lay the blame for a lot of this movie's faults on the director, Andy Tennant.  The comedy and the romance are both very weak and he has to bear a large portion of the guilt for that.  The movie poster proudly states, "From the director of Hitch", as if that were something to brag about.  To my mind, he should be taking the bullet for this one and not Aniston as you claim, Eric.