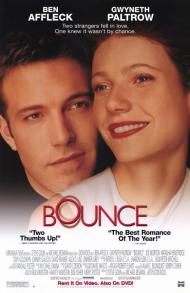 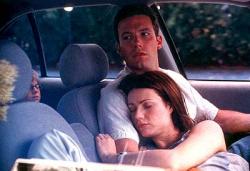 For a romantic movie to work it has to have two interesting, fully fleshed leads. Think of Gone With the Wind and The Way We Were. They had love interests with strengths and weaknesses. The audience understands why they are attracted to each other. Not enough film makers understand this. Far too often, a gimmick on how the couple meet is given more attention than their actual love for each other. Think of Catch and Release and sadly enough, Bounce.

Advertising executive, Buddy, is stranded in Chicago, due to a snow storm. At the airport, he befriends a married father of two, Greg, who is likewise on his way back to Los Angeles, but taking another flight. Buddy decides to stay another night in Chicago, as he just met a woman for a one night stand. He gives his first class ticket to Greg, so he will get home sooner, and Buddy will be too busy getting laid to use it anyway.

The plane goes down and everyone on board dies. Buddy is racked with guilt so he goes to the widow and tells his story. No! Of course he does not do the sensible thing. He becomes a drunk, as the airline that went down is his advertising firms biggest client, and he works on the PR commercials to lesson the emotional blame on the airline. A year later he is out of rehab and stalking the widow.

Under falsehoods they meet. Each telling the other a lie. They fall in love over a baseball game. She eventually tells him the truth, while he keeps his secret for dramatic effect. Of course it eventually comes out and they argue, blah, blah, blah, you know the rest.

Other than the first fifteen minutes, this movie could not be any more formulaic if it tried. However, it is has two things going for it, Affleck and Paltrow. They alone raise this movie above the Lifetime channel. This, then real life, couple has great on screen chemistry. The only scenes that ring at all true are when they are together. They laugh and cry together, and they make it all seem quite genuine. Although they do what they can, the script does not give either of their characters enough to flesh them out. We understand the circumstances under which they meet, but the movie never explains why they fall I love? Affleck’s and Paltrow’s charms work overtime to get us to like them, but, other than gratitude and guilt, I never felt their romantic connection.