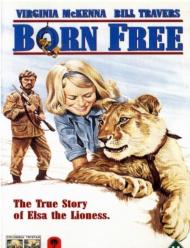 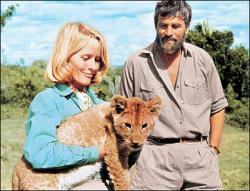 Born Free holds a very special place in my heart for many reasons. It was one of the first theatrical films my brothers and I ever saw during one of its rereleases. The theme song and score, which won John Barry his first Academy Awards, have never left my memory. Nostalgia aside, this film’s message of unconditional love is timeless and emotionally stirring. Everyone in the world should see this film.

Based on a true story, Born Free tells the story of a British game keeper, George, and his wife, Joy, who lived in Kenya. After killing a lion and lioness that attacked him, George discovered that they had three kittens that he took home to Joy. She nursed and named them all but her heart went out to the runt of the litter, whom she named Elsa.

The kittens played and had a routinely domesticated cat life until they got too big, upon which two were sent to a zoo, with Elsa remaining as the couples pet. She followed Joy everywhere. When Joy sketched in the bush, Elsa sat patiently by her side. When Joy took a drive in their covered truck, Elsa would climb on top and ride along with comfortable aplomb.

After causing some elephants to stampede a village, it was decided that Elsa would have to be returned to the wild. Joy and George took great care to introduce her to wild lions and wild game that she could eat. Elsa, who had become as tamed as a house cat nearly starved. At one point they left her in the wild to see if she could survive the night. The next morning she wandered into their tent with obvious signs that another animal had seriously harmed her. This sparks the film’s most telling dialogue.

Seeing how hurt Elsa is from her night in the wild, George pleads with Joy, “What's wrong with a zoo, anyway?” A distraught Joy responds, “Nothing. Except that she won't be free.” George continues to argue, “And Is freedom so important?” Joy then slam dunks the debate with, “Yes, yes, she was born free and she has the right to live free. Why don't we live in a more comfortable setting George? Other people do. We chose to live out here cause it represents freedom for us. Because we can breathe.”

That scene blows me away as it so greatly defines freedom. Yes, Elsa’s life will be harder on the Serengeti than in a zoo. She will have to chase and kill her food instead of having it handed to her. Can we not draw all kinds of meaning from this? We all want freedom but no one ever said it comes easily. People who live their life on government assistance certainly think of themselves as free but can we not compare them to being in a zoo, getting things handed to them but living by the restrictions of that assistance?

Born Free also reminded me of my wife. Three years ago she came across a very young abandoned kitten under a bush. We were not certain of her age but her ears had yet to even appear. My wife nursed her, stimulated her bowls with a warm wash cloth and named her Katey. To this day, Katey will follow me from room to room and never objects to being held. Granted, Katey is smaller than Elsa, but the process was the same.

Born Free is about so many things but mostly it is a tale of love. Joy and George made the difficult decision of having to let Elsa go. As our youngest son just finished high school, I understand how this couple felt about forcing Elsa out into the scary world. Sure, our children may want to stay on for the free meals and easy living, but there comes a time for all cubs to leave their pride. 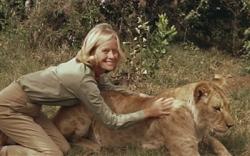 I couldn't agree more. Born Free is a wonderful film. It touched me very deeply as a child and I'm always moved by it whenever I watch it. I agree with Eric that everyone should see this movie, but especially the young. For small children, Born Free makes a marvelous introduction to the magic of both the Movies and Mother Nature. The scenes of the three lion cubs playing -and making a mess- are funny and adorable. They're like big cat precursors to all those funny cat videos so popular on YouTube.

They did a great job of reenacting this true story. As a child I actually thought this film was a documentary. It wasn't until I got older that I realized it was a scripted movie with actors, based on the book written by Joy Adamson about her life in the wilds of Kenya with her husband George and their pet lioness Elsa. At any rate the actors and lions in the movie exhibit a very natural rapport.

As my brother wrote, it is the central concept of freedom versus life in a cage that gives Born Free such a big emotional wallop. The viewer is in anguish watching Elsa struggle to adapt to life in the wild as she makes the difficult transition from pampered pet to self reliant queen of the jungle. One image that has always stood out in my mind (and the biggest reason why I took this movie as reality) is the picture of Elsa with her ribs showing. Clearly they used a photo of the real Elsa as she looked during her ordeal since -I'm assuming- they didn't starve a lion nearly to death just to make this movie. But the sight of it broke my innocent young heart as a boy and it remains a very powerful image.

Another thing that adds to Born Free's verisimilitude is the fact that its human stars, Virginia McKenna and Bill Travers, were a real-life couple. Their chemistry together seems true because it was. And they both seem quite comfortable around each of the lions that played Elsa at the different stages in her life. The situation of having a fully grown lion as a domesticated pet allows for some gentle humor such as the sight of Elsa casually perched atop the roof of that truck or scaring the hell out of their family friend.

The one thing in Eric's review that I disagree vehemently with is his comparison to people living on government assistance to animals in a zoo. First of all it's incredibly insulting to compare humans to animals. It is also a ridiculous comparison as animals have no conscious choice in whether or not they live free or in a zoo. Humans, by contrast, have the ability to choose. And people on welfare still have the same civil rights as other members of society.

As far as Born Free is concerned, I am in complete agreement with my brother. It's a flawless family film that holds up as well today as it did the first time I saw it in the early 1970s. Kids today will love it as much as we did then, and for adults who loved it when they were young it will conjure up all kinds of warm nostalgia (the score is forever embedded in my DNA). If you've never seen Born Free, or haven't watched it in years, do so. You won't be disappointed.