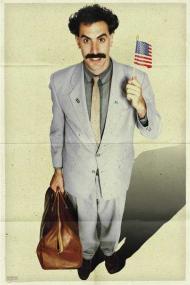 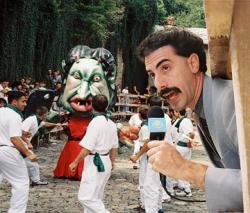 This is one of those movies that if I hadn't heard anything about it I think I would have enjoyed it more. The hype surrounding it has been so mammoth and it has been praised so much that there's no way it could be as good as everyone has been saying it is. The bar has been set so high that it can't help but disapoint. Oh, it's funny and enjoyable (at times uncomfortably so), but when you really look at it you'll see that it's just one long episode of Punk'd or Candid Camera (depending upon your age), only those being duped are never let in on the joke.

Sacha Baron Cohen stars as Borat, a television reporter in his native Kazakhstan. In an effort to learn how to improve that country, his government sends Borat on a trip to America to learn from "the greatest country on earth". Told in a mockumentary style, the film details his travels across the US and shows his many run-ins with "average" Americans along the way, all of whom seem to be oblivious that they are being duped.

Nearly all of the jokes in the movie stem from shock and political incorrectness. Some of them work and some don't. Borat's nude wrestling match with his producer is disgustingly funny. The movie intersperses scripted scenes with interviews between Borat and real people. On the whole I found the scripted scenes to be the funniest in the film. The problem with the interviews is that they become a bit repetitive. You also don't know how much they've been edited. Interview anyone long enough and they're bound to say something stupid. Although there are some very funny moments during these scenes.

One thing that must be said is that Borat is an equal opportunity offender. He insults Jews, Christians, Feminists, Gays and just about every one else he happens to come across. My biggest question about this movie is how did Cohen keep a straight face during some of his interviews? He is clearly a man who knows no comedic fear.

Some reviews and stories about this movie have written how it is an incisive look at the hidden bigotry in America and how it is a biting satire of our culture. Was there every any doubt that there are still bigots here? There are also plenty of people who aren't bigots, but you wouldn't know it by watching this movie. I get the feeling sometimes when I read these articles that go to great depth to analyze Borat that it is people trying raise the movie above its mostly vulgar humor. If it has a deeper meaning, they seem to say, than it's okay that I laughed when Borat pooped in front of Trump Tower. 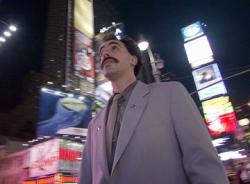 Borat is an original and often hilarious character. This is a good thing since he is in virtually every scene and carries the entire movie on his shoulders. As Scott wrote the movie is similar in style to Punked or Candid Camera but differs in the fact that unlike those shows Borat offers political and social commentary, albeit in an exaggerated and outlandish, although often clever, manner.

It is fast-paced and very funny but I can't imagine watching it more than once. Most humor based on shocking people is really only funny the first time you see it.

Sacha Baron Cohen proves himself a movie star and filmmaker to be reckoned with. It will be interesting to see what he does next. Anyone who hasn't yet experienced this movie should rush out and do so and see for themselves what all the fuss is about. 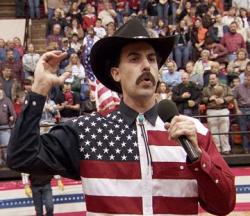 Hidden prejudices and narrowminded comments are exactly what Cohen wanted. The only thing funny about interviewing an "average" nice person is to expose them to something unaverage or offensive. He runs naked through a hotel lobby. He invites a prostitute to dine with him at a home where a reverend is present. He offends a crowd at a rodeo by talking about the destruction of Iraq. I laughed hardest when he was "saved" at a Christian revival.

If anything about the people of The United State of America is learned from this movie it is that we are generally open to foreigners and meeting new people. That is, except for those snobbish New Yorkers. Everyone in the movie is polite to Borat and eager to help, at least until he offends them or tries to kiss them.

What I found most interesting is that we laugh at ignorance and prejudices in this movie but we crucify people in real life for saying the same type of things. How many times has Michael Richards, Mel Gibson and John Kerry had to say they were sorry for opening their mouths without thinking? If anything is to be learned from this movie it is that we all just need to lighten up!