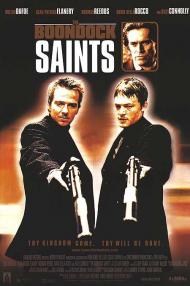 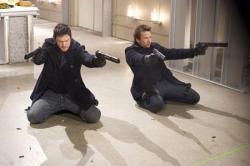 Sean Patrick Flannery and Norman Reedus in The Boondock Saints

The Boondock Saints is one of the best "guy" movies ever made.  It is full of blood and violence and is politically incorrect.   This is the kind of movie that rarely gets made these days.   The two main characters are even devout Catholics.

In Boston, two exceptional fraternal twins, Connor and Murphy, become vigilantes.   While in an Irish bar, some Russian mobsters walk in and start making trouble.  "I am Ivan Checkov, and you will be closing now."  Both brothers speak Russian, among other languages.  Murphy responds to him, "Checkov? Well, this here's McCoy. We find a Spock, we got us an away team."  A bar fight breaks out with the brothers coming out the victors.  The Russians later show up at the twins apartment and try to kill them.

The brothers end up declaring war on organized crime.  Connor and Murphy become vigilante assassins.  They pray in church first and then go kill some baddies.  They kill the head bad guys with two bullets to the back of their head.  Each brother aims their gun and recites, "In nomine Patri.  Et Fili.  Spiritus Sancti." Then it's lights out.

Enter FBI agent Smecker.  Willem Dafoe steals every scene as the arrogant detective.  He spares no expense at belittling Boston PD, "First of all, I'd like to thank whichever one of you donut-munching, barrel-assed, pud-pulling sissies leaked this to the press."  Although he is gay himself, he insults other homosexuals as well.  In one scene he takes a call while lying in bed with another man.  While he talks on the phone the guy lays up against Smecker and rubs his chest, telling him he wants to cuddle.  Smecker smacks his hand and says, "Cuddle?  What a fag."

I am not sure if his character is offensive to homosexuals or not?  I will wait for Patrick's input.  It has a very racist joke.  The religion will put off atheists.  Liberals will be indignant over the use of guns.  The movie really hits a conservative note when the brothers barge in on a court hearing and exact some of their own justice.  Before killing the Italian mobster on trial they address everyone in the court.  "Now you will receive us."  "We do not ask for your poor, or your hungry."  "We do not want your tired and sick."  "It is your corrupt we claim."  "In nomine Patri. Et Fili. Spiritus Sancti."   I wonder if this film is big in Arizona?

You have to watch this film in the fun spirit that it was made.  Some scenes are far too coincidental to be real, but it is all too much fun to get picky over.   Connor and Murphy are two unique characters in modern American cinema.  They believe in a higher power, loyalty and a sense of right and wrong.  Although they, and we, know vigilantism is illegal, we all publicly look the other way, and in private cheer, when a known criminal is killed.

The Boondock Saints was made in 1998 but only received a limited release in 2000.  I am not sure why.  Perhaps it was for some reasons I have listed.  A great movie like this could not be suppressed though.  It went on to become a cult classic on DVD, and even had a sequel made  in 2009.

Just in case you did not know, "In nomine Patri. Et Fili. Spiritus Sancti," is Latin for, "In the name of the Father, the Son and the Holy Ghost."