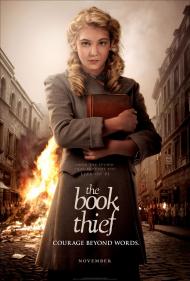 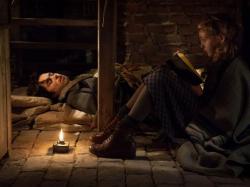 Ben Schnetzer and Sophie Nelisse in The Book Thief

I am not sure why but I have always been sensitive to World War II stories that take place in Europe. They can get to me on a spiritual level like no other. Although a fictional tale based on a novel by Markus Zusak, The Book Thief was no exception as it left me emotionally raw.

In Nazi Germany it was not unheard of for enemies of the state, such as Jews and Communists, to be sent to concentration camps while their children were sent to live with a German family who would raise them to be good German citizens. This was especially true if the child was Aryan looking. Such is the case of Liesel who is adopted by a poor German couple after her mother is sent away for being a communist.

Liesel has the usual angst of being the new kid in town. It does not help that she is illiterate. Her adopted mother, played brilliantly by Emily Watson, comes on strong at first. “From now on, you call me mama, ya? And that lazy pig over there, you call him papa.” Later we see that she has a warm heart hidden under her cold exterior. Liesel’s adopted father is played by Geoffrey Rush, who always has a twinkle in his eye for Liesel and starts to teach her how to read.

She makes friends with Rudy, the boy next door. The two become good Nazi children. Liesel accepts everything, such as singing songs that denounce Jews. She is just a child and knows nothing else. That is until she and Rudy gleefully attend a Nazi rally that is actually a book burning. She has just started to read and is utterly fascinated by the written word. She is confused as to why they would want to burn what she sees as a treasure.

Things for Liesel get even more complex when a young Jewish man, Max, seeks refuge in their home after surviving kristallnacht. Her parents strenuously tell her that his presence must be kept a secret. She takes to him and when he becomes sick she steals (borrows) books from a wealthy family and reads them to Max. In return, Max encourages Liesel to write, “If your eyes could speak, what would they say?”

The movie is ominously narrated by Death. As the movie opens he states that death comes to everyone, which is not really a spoiler since we already know that. What we do not know is who will and who will not survive the war. After one particularly sad life is extinguished, Death narrates that their spirit just rolled into his arms, and I lost it. Yeah, I cried. Death is more comforting here than scary. He even lightheartedly remarks at one point that he is Hitler’s most dedicated soldier.

Covering almost the entire war years, The Book Thief is World War II as seen through the eyes of a German child. This story is life-and death-affirming. It celebrates the family and the strength of the human spirit. War is mankind at its worst but wars can also bring out the greatness often hidden in us all. Sometimes it is even children who show us how to do that. As Death notes in the film, “The only truth that I truly know is that I am haunted by humans.” 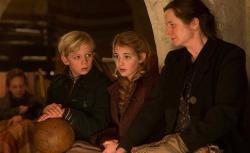 The Book Thief tells an emotionally compelling tale. It shows the horrors of life under the Nazi regime from a child's perspective. This means that most of the gruesome details are absent, since we witness only what Liesel experiences. Also missing is that WWII movie staple, the sadistic German officer. In his place, and appropriately enough given the main character's age, is a sadistic local bully.

The narration by Death brings a fantasy element to the story. He speaks in a gentle, very civilized tone of voice that, as my brother stated, comes across as more comforting than scary. This isn't exactly Schindler's List. But then the evils of Hitler and his Nazis are so deeply ingrained in our collective consciousness that we don't need all the gory details to understand the perils faced by Liesel and her family by their actions in hiding a Jew in their home.

One thing I noticed about the story is the fact that they used the same actors to play the children even though the story covers from 1938 to 1945. Liesel and Rudy behave in a more mature fashion as the years go by but they look pretty much the same. Although some attempt is made to age them physically, it doesn't really work. It is almost as if they are stuck in a time warp or something.

The acting is top notch. Like Eric I found Emily Watson superb as the mother. She is a more interesting and complex person than the father played by Geoffrey Rush. He is certainly likable, being both cheerful and brave but I always knew how he was going to behave in any given situation, while the mother sometimes surprised me. Both of the actors playing the two main children are impressive. Sophie Nelisse has an open face and large expressive eyes. Nico Liersch is the picture of a perfect Nazi youth but he exhibits an endearing charm and cocksure attitude that is never off-putting.

The one character we never really get to know is Max. He is more of a symbol than a person. This doesn't lessen the emotional impact he has on the story though and it remains consistent with the perspective of the movie being from Liesel's point of view.

The only thing Eric wrote that I'm not in complete agreement with is when he describes Liesel and Rudy as “gleefully” attending the book burning. I think they were curious and even a bit trepidatious but to me they didn't seem gleeful. At any rate it marks the beginning of both of their eyes being opened to the horrors rapidly engulfing them.

The conclusion to the movie is quite satisfying although sad. Like my brother I shed a few tears along the way. The Book Thief may be a child's war movie (if there is such a thing) but it is no less emotionally engaging for it. 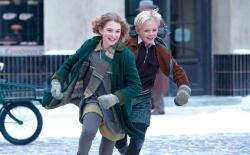 Sophie Nelisse and Nico Liersch in The Book Thief.

The Book Thief is based on the best selling novel of the same name by Markus Zusak. Published in 2005, it won several awards and remained on the New York Times' bestseller list for an astounding 230 weeks. It was much less successful as a film. It received mixed reviews, rating just 50% fresh on Rotten Tomatoes and earning less than $50 million worldwide; enough to earn a profit without being a hit. With that in mind, I watched it with very low expectations, despite Eric's rave review. As he himself confessed, he's known for being easily moved by European WWII stories. Aided by those lowered expectations, I ended up enjoying this movie more than I thought I would, despite a leisurely pace.

The story is aided by the strong performances of its cast. Young Sophie Nelisse holds the movie together in the lead role. Her large, expressive eyes help us see the story from her point of view. Emily Watson and Geoffrey Rush likewise do sterling work as her foster parents. Rush as Hans is the kindhearted father, while Watson is the stern, but ultimately warmhearted mother. They make the ideal parents for Liesel who has only known uncertainty in her life until she meets them.

As my brothers wrote, the inclusion of Death brings a fantasy element to the proceedings. He is perfectly voiced by English actor Roger Allam. His narration provides some dark wit. "One small fact: you are going to die. Despite every effort, no one lives forever. Sorry to be such a spoiler. My advice is when the time comes, don't panic. It doesn't seem to help."

As my brothers wrote, the ending is sad, yet ultimately satisfying. I too was moved to tears by part of it. Given that death is doing the narrating and there is a war on, I expected someone to die, but wasn't expecting quite this ending. I was also surprised by how much it affected me, which is the sign of a good movie watching experience.

At over 2 hours there is room for some trimming, particularly in the first half of the film. Also, like Patrick I wondered at how the children don't seem to age despite the passing years. I also wondered at the accents and odd choice of German words. Sometimes the cast speaks or sings in German while most of the time they just speak English with a strong German accent, but with the occasional German word thrown in. It doesn't mar the story, but I wish they'd made one language choice and stuck with it.

Not a perfect film by any means, but The Book Thief is worth watching at least once.