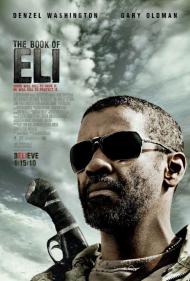 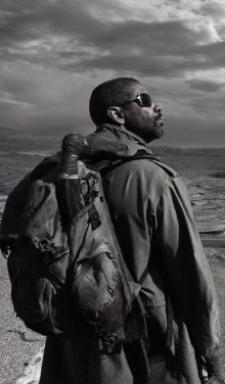 At first glance, The Book of Eli is not a very origianl film. It does however, have one unique element. It contains religion. The main character prays. The entire plot, what little there actually is, centers on the very survival of Christianity.

In a post apocalyptic world, a lone man walks across a barren landscape, heading west. Occasionally he has to hack people up with his machete as they try to rob him. He stops in a run down town to get his Ipod charged. The town is run by a man, Carnegie, who employs motorcycle driving thugs to steal from anyone they can find on the roads, in search of a particular book. A book that Eli has in his possession. Carnegie sends Solara to seduce Eli and get the book. She ends up leaving town with him instead. Carnegie gives chase with his men, more action ensues.

The entire movie is filmed in brown and grey hues. Everything is crumbling down. Entropy is hard at work. It is nothing unique. Think Mad Max, Terminator Salvation, The Road or any other end of the world movie, and you got this depressing landscape. The reason for the destruction is only hinted at. The sky opened and everything died, is the most information given. Eli walks by several huge craters, but it never says if they were made by meteors or bombs. At one point they spend the night in an old nuclear silo.

Although the setting and characters are a direct lift from Mad Max, the idea of religion as a valuable commodity is quite original. Carnegie says he wants the book because he can use it's content to manipulate people. He already controls an entire town, so I am not sure what he has to gain? Eli is taking the book west, to some unknown locale that "God" told him about.

The message of the story is that Christianity can be used for good or evil or just historical knowledge. All of that is fascinating. However, that is a small part of a two hour movie. Tighter editing was definitely needed. How many times do we have to see Washington, and/or Kunis walk across a bleak world.

To make things worse, the Hughes brothers use slow motion all of the time. If you want to linger on a hot girl, or empathize a cool action move, then the slo-mo is acceptable. Using it over and over, to just show someone walking, is not. 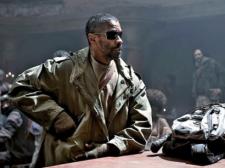 Denzel Washington plays a believable prophet in this post-apocalyptic thriller.

While I agree with you Eric that they could have done more with the central concept, I apparently still found it more entertaining than you did. I never felt like the slow motion was overdone and I also didn't feel that it was badly edited or overlong. True, the post-apocalyptic setting has been done many times before but its such a rich story vein that there's still plenty left to be mined.

It's true that you don't often see god or Christianity in Hollywood movies these days and I almost wish they'd gone further with it. The best part of the film is the character of Eli and his amazing ability to kick ass and survive through the wasted landscape. His power, as we learn, comes from God and his faith, yet the writers stop short of making any kind of definitive statement about religion.

In truth it is Denzel Washington who holds the film together and makes it so enjoyable. Denzel has gained a certain gravitas as he's aged that gives him an inner-strength that makes it easy to believe that he's a death-dealing prophet. If there are any scenes that could be trimmed then then they are the few scenes in which Eli doesn't appear.

Oldman's motive as the villain is pretty clear. He wants to expand his power and wants to use the Bible's power to unite people as the means of doing that. It also seems pretty obvious that it was nuclear war that brought the world to an end. The craters, the ash and the bombed out buildings all seem pretty accurate evidence towards that.

Could this have been better? Sure, but that's not to say that it isn't pretty damn good already. The ending even leaves itself open to a sequel and if so, I'd definitely go to see it.

It started slow but definitely improved as it went along. For the record I didn’t mind the Hughes brother’s use of slow motion at all. I agree with Scott that Denzel Washington has grown in stature as he’s aged. He fills the screen like John Wayne or Clint Eastwood in their primes. He was perfectly cast as Eli.

The surprise ending is brilliant. Like The Sixth Sense if you go back and re-watch it after knowing the twist there are plenty of hints.  Besides providing Gary Oldman’s villain with the perfect comeuppance it proves that the actual physical book is not as important as the words and ideas contained therein.

Like you Eric I was at first puzzled by Gary Oldman’s character’s desire for Eli’s book. I mean he already had control of everything of value in that fucked up wasteland. And since nearly everyone else is illiterate why couldn’t he just use any book as his “bible”? Clearly he is meant to be allegorical. He is the antichrist to Eli’s messiah.

I’m surprised that neither of my brothers mentioned the old cannibalistic farm couple that Eli and Solara come across, George and Martha. Clearly a direct reference to Edward Albee’s bickering couple from Who’s Afraid of Virginia Woolf? Only this George and Martha plan to do more than just carve their guests up with words and mind games. They also provide a breeze of levity in what is otherwise a stagnantly somber movie.

The muted colors and deep shadows used throughout the movie grew tiresome on the eyes after a while. It was difficult at times to see faces. The bursts of color when they reached the promised land of Alcatraz Island in San Francisco Bay were refreshing. Denzel’s best line comes when Malcolm McDowell asks him what condition his bible is in. “It’s beat up. But it will do the job.”

As much as I enjoyed this movie I have no interest in a sequel. What would be the point without Eli?