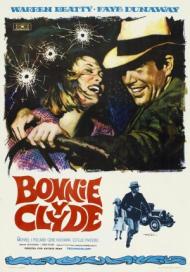 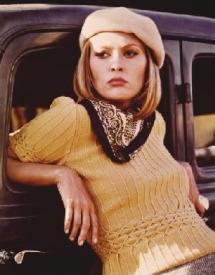 Faye Dunaway in Bonnie and Clyde.

Warren Beatty and Faye Dunaway are incredible as the doomed couple who pursue a life of crime. You want to talk chemistry? From their first meeting to there last car ride, these two are concupiscent together.

The film begins as an awkward love story. The attraction is obvious. Of course it doesn't hurt that Bonnie is naked. Clyde, however, is impotent. Director Arthur Penn would have us believe that Clyde enjoys shooting his weapon because he's unable to shoot his gun.

The movie moves between action and humor throughout the middle of it. From robbing banks to picking up Gene Wilder for a joy ride. Unlike Brazil this film navigates smoothly between the funny scenes and the violence.

The final part is without humor as reality finally catches up with the couple and their gang. The love story is at its sweetest here. Which makes the inevitable ending all that more sad. Now if Bonnie And Clyde has any flaw it is only that the stars are so damn good-looking it's practically distracting. I doubt if the real Bonnie and Clyde looked that good on the run. If I ever get robbed I hope the thief looks as good as Faye Dunaway does here.

There are three basic points to the modern movie rating system, language, sexual content/nudity and violence. Up until the mid sixties this was not a serious issue. Then three movies were released in rapid succession that challenged the time honored limits of filmdom. Who's Afraid of Virginia Woolf? in '66, and The Graduate and Bonnie and Clyde both in '67.

Bonnie and Clyde pushed the envelope in terms of screen violence as The Graduate did sex and Virginia Woolf language. Today these three movies are considered landmark classics.

Bonnie and Clyde is the most entertaining movie of the group. It's plot, two lovers go on a crime spree and wind up slaughtered, is now a worn out tradition. But never has it been done better.

Like Eric I think both leads are beautiful to look at, still it is their intense acting that truly makes the ride great. Warren Beatty is cocksure as Clyde yet his smile hides a world of insecurities. Faye Dunaway was then in her mid twenties, how many actresses that age today could put as much maturity and anger, not to mention raw sex appeal into the role?

As bittersweet as it is graphically violent. 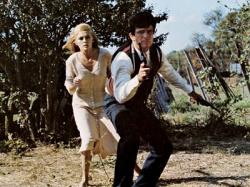 Faye Dunaway and Warren Beatty in Bonnie and Clyde.

This is one of those movies that may be a classic, but it's not one that I can watch over and over. Which explains why I only gave it three stars.

The cast, as Patrick and Eric pointed out, are great in their roles. If it wasn't for these stars, I would have enjoyed it far less. They overcome the things I don't like about the movie.

The Robin Hood aspect is one of the things I don't care for. The portrayal of the banks being evil for repossessing the farms during the depression, doesn't automatically make Bonnie & Clyde good guys, and yet the film slants them in that direction. The lack of sex also bothers me. Freudian or not, I don't care for the impotent angle. With two such attractive stars, a little sex would seem to be in order.

These are small things though, and on the whole this is a very good movie. Certain scenes stand out. The opening where they first meet, the scene Patrick mentioned with Gene Wilder, and of course, the final gun battle are all classic. I just feel that this movie is made up of some great scenes that fail to add up to a perfect film.