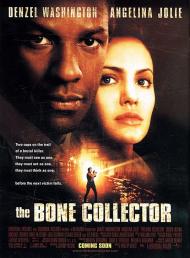 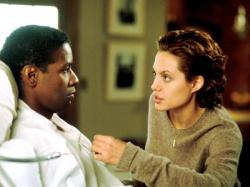 Sometimes the pairing of two great movie stars is enough to attract me to a film. This was the case for The Bone Collector. Starring Jolie and Washington, I found myself eager to watch this movie.

Washington plays a paraplegic forensics expert and Jolie is a rookie beat cop. She finds a body and some clues. Before you know it, the couple are playing Rear Window, with Jolie out investigating a serial killer while Washington gives direction from his apartment bed. None of this says much for the NYPD if a man who never leaves his bed and a woman who just wants to work in youth services are the only ones who can solve this crime.

For awhile, the movie plays like a series of the same events. Jolie goes about finding a gruesome corpse and some ridiculously obscure clues, that only she and Washington can figure out. Then she does it again. This killer is about as brilliant as the Riddler fighting Batman. He's leaving clues so he can get caught? Granted, these clues really only make sense if your psychic. He claims that he is playing a game with Washington but why help someone you are exacting some revenge on?

While the movie did not make a whole lot of sense, I at least still had two such luminary movie stars to marvel at right? Wrong! Washington never gets out of the damn bed. Jolie never lets her hair down in any good sexy scene. At least in Rear Window there is great banter between Grace Kelly and Jimmy Stewart. The best dialogue I found in The Bone Collector was when Jolie told Washington that it was, "...truly pathetic" that he used his condition as an excuse to boss people around.

What is really pathetic is a movie that could have starred any unknown actors and still have been just as well (or as badly) made. Of course what sucker would bother wasting his time watching it then? So I guess what is truly pathetic is a movie critic who anticipates that a film will be worth watching just because a couple of his favorite stars are in it.