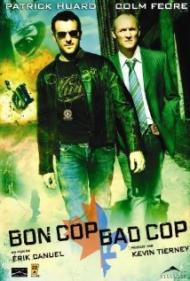 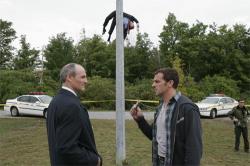 When Bon Cop, Good Cop was released in Canada, it was the most successful film ever made and released there. It broke the previous record held by Porky's since 1982. It has since lost the title though, to Resident Evil: After Life (2010). Unlike those films though, Bon Cop, Good Cop never found much of an international audience. This is due to it being as distinctively Canadian as Hockey.

Speaking of Hockey, the film opens with a man being killed by a mask wearing hockey fan, who is upset by players and teams moving to The United States. We then meet two police officers from two different cities, who end up investigating the serial murders together after a body is found on the Quebec/Ontario border sign. Martin Ward is from English speaking Toronto, Ontario, while David Bouchard is from French speaking Montreal, Quebec. Neither want the case. Martin states to David, of the corpes, "His heart is in Quebec." David responds, "Ya l'Ontario dans l'cul aussi!" (But his ass belongs to you.)

Many jokes stem from their different languages. One of the best is when they visit the body in a morgue and the French speaking coroner makes fun of how Martin says, "Tattoo." More than language differentiate these two men. Martin is a single father of a teenage son whom he struggles to communicate with. David lives upstairs from his divorced wife and young daughter. Martin dresses in ties and follows the rules, while David dresses like a television cop and thinks nothing of breaking any rule he sees fit. Both of their personal lives play into the story for laughs as well as for tension.

The buddy cop film has long grown old, but seems quite fresh and original here. It combines humor with drama very easily and effectively. This is exemplified in a scene where the two men go to Bouchard's daughter's ballet recital and we see another side of the macho David. Seconds later, we have a scene that we think is going to be played for laughs but ends up otherwise. Although the film's strength is its humor, it also contains some decent drama. Look no further than the scene where David and his ex-wife become emotional over their abducted daughter.

Patrick Huard not only stars but helped in writing the screenplay. In Canada he is a well known comic television/movie actor. Colm Feore may seem more familiar in The United States as he has appeared in many popular television shows as well as had small roles in such films as Thor (2011) and Chicago (2002).

Bon Cop, Good Cop is a great action/comedy. The problem it has is that it is so very, very Canadian. The sports commentator prominently featured is a famous sports personality in Canada. Many hockey references are made that are likely common knowledge in Canada but meant nothing to me. The film's best jokes though, involve the language barriers of this bilingual nation. Those are jokes anyone can enjoy, but likely even more so if you are Canadian. At one point David says to Martin, "You have an accent in both languages. Who was your teacher, Jean Chretien?" That line is only funny if you know that Chretien is a former Canadian Prime Minister.

Years ago, I took my family to Canada on vacation. We discovered in a grocery store that all the food labels had English on one side and French on the other. For some reason we found that funny. I remember thinking that Canada must be either a confused country or one with a sense of humor. With Bon Cop, Good Cop, I discover that it is both.