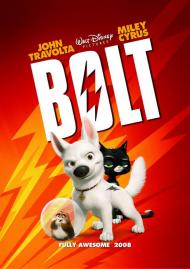 Rhino the hamster steals the show with his fanboy enthusiasm.

Eric recently lamented the fact that no one seems to make movies just for entertainment purposes anymore. Well Bolt is definitely that type of movie. It's an enjoyable little cartoon with a message no more ambitious than simple loyalty. Of course, it would lose points with Eric because like nearly all Disney cartoons Bolt contains a single parent family. If you can get past that as I'm sure everyone who isn't Eric will be able to, then you'll enjoy a funny, fast-paced cartoon.

Bolt (voiced by John Travolta) is a dog who plays a super-dog on television. However, he's lived his whole life in the studio and doesn't realize that he's just an actor an not really a superhero. He's the canine version of The Truman Show. It's a silly plot device, the idea that an entire television show would be built around the idea that the everyone tries to fool a dog into not knowing he's on TV, but you just have to suspend your disbelief over that point because the movie really picks up when Bolt accidentally ends up being shipped across the country from Los Angeles to New York City. Because from there it becomes a buddy road picture as Bolt hooks up with a mangy alley-cat and on the road a rabid fan-boy hamster named Rhino. The three animals share adventures and friendship as they make their way back to L.A. where Bolt yearns to be reunited with his person.

Hands down it is Rhino the hamster who steals this movie. His enthusiasm is infectious and is matched only by his amazing ability to do unbelievable thins inside his little rolling plastic ball. If this had been the Rhino movie, I wouldn't have minded. The pigeons who appear in different places across the country, always bearing the accent and mannerisms of the locale are also quite funny.

Although Bolt is almost never really in danger, the movie is fast-paced and action-filled. I watched the 3D version (it's offered in both 3D and traditional) and while it added nothing to the humor, it certainly enhanced some of the action. And the large plastic 3D glasses certainly beat the hell out of those old cardboard jobs. They even fit quite nicely over my regular glasses.

I know this is just a silly cartoon, but a lot of live-action movies could learn a thing or two from Bolt. It doesn't try to be more than it is. It entertains in a light and fun way. Yes Hollywood, sometimes that's all we want.

Rhino is happy in his cage, while Bolt shuns freedom to be back in his.

It did not bother me until I read your review Scott. Penny is a child of a single mother, starring in a television show where she plays the daughter of a single father. I must becoming numb to Disney’s scorn of the nuclear family, or I was too bored to care.

Bolt is a neglected, abused dog who gets left alone for extended periods of time. This would have some very negative affects on a real dog, but that barely gets touched upon. Penny would likewise be scarred by the fact that she is forcibly kept away from the pet she loves. The only bright spot in the early portion of the movie is when the cat taunts Bolt. He stays in character, and antagonizes Bolt as if the roles they play are real. The joke being that Bolt thinks it is all true.

Bolt is in most scenes. That would not be a problem had Bolt been an entertaining character, but he is nothing more than a dumb dog. Yes, he does not have a clue about anything. In the real world this would go without saying. However, this cartoon has animals watch television, and talk to other species. Within the confines of this movie, Bolt is one stupid canine.

Bolt has an unoriginal plot on so many levels. It features Disney’s disdain for traditional families. Thanks for reminding me, Scott. It throws a forgettable song in the middle of the movie, slowing the plot down. The best moments are with Rhino. He is definitely the funniest character, “I’ll get a ladder.” “I’ll snap his neck.” “I’ll get my ball.” It just takes far too long to get to him.