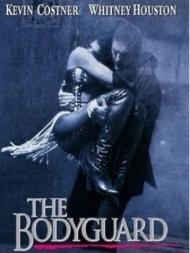 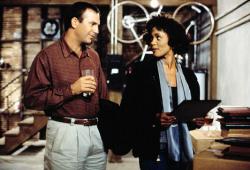 Kevin Costner and Whitney Houston in The Bodyguard

In the 1980's Whitney Houston was a pop princess, recording such hits as "The Greatest Love of All" and "I Wanna Dance with Somebody".  In the 1990's she became a movie star, appearing in the critically acclaimed Waiting to Exhale (1995), The Preacher's Wife (1996) with Denzel Washington, and of course, her film debut in The Bodyguard.

The idea for The Bodyguard was originally proposed in the 1970's as a vehicle for Diana Ross, starring opposite Steve McQueen.  The love story would have been considered controversial for the time and never came to light.  Reportedly, Kevin Costner based his portrayal of Frank Farmer on Steve McQueen.

The Bodyguard is not big on plot, as the title itself tells the story.  Houston plays singer/actress Rachel Marron, who is being sent threatening letters.  Farmer, a former Secret Service agent, is hired to protect her.   After spending some time together, they fall in love.  The problem being that Farmer regrets becoming emotionally involved and pulls away after they have sex.  Marron, a diva used to getting her way, does not take his rejection well.  After all, she does pay him to take care of her.  There are some minor side plots with Marron's polite son and jealous sister, but everything takes a back seat to Marron and Farmer looking longingly at each other.

There is some tension.  Whenever Marron has to go on stage, she and Farmer wonder if her would be killer is in the audience.  The biggest action sequence comes late in the film when Farmer takes Marron and her family to his father's isolated home in the woods, and the killer shows up.  It is Costner's best scene, as he otherwise plays Farmer as a very emotionally closed off person in the rest of the film.

Reportedly Houston's performance was so bad at initial test screenings that her part had to be edited down.   That story may hold water as she often seems absent from the film.  Especially early on.  Her performance is wooden, and she often seems lost as to what emotion she is playing.   She is at her best when playing the celebrity to a crowd, or performing on stage.   Those are the times she seems most natural.   Houston was absolutely adorable here.  Her smile is extremely radiant.   She had one of those faces that could light up a room.

The passion within the love story is very limited.  She falls in love with him because he is someone she can truly trust, while he falls in love with her because she is hot.  The most passionate the film ever gets is when Houston sings.  Here she is in her element, and her big voice demands you listen.  "I Have Nothing" is played several times throughout the film and it has stayed in my head.  The film ends with Houston's version of the Dolly Parton penned  "I Will Always Love You."  It became her biggest hit, as well as one of the best selling songs of all time.  The soundtrack has and will continue to outlive the movie.