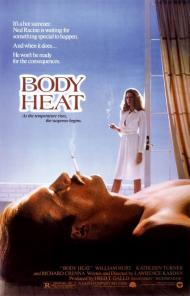 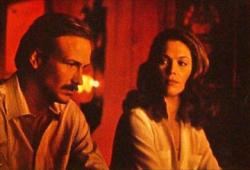 I recall years ago, our father pointing to an image of Kathleen Turner, and telling me that she was the new Lauren Bacall.  Turner shares Bacall's smoky voice and both were seductively attractive in their early films.  Body Heat is a nod to those type of film noirs that Bacall first started in.   It takes place in Florida as did one of Bacall's early films, Key Largo.

Hurt plays shifty small time lawyer Ned Racine. During a hot Florida summer, in which no one seems to have air conditioning, he meets and starts a sexually passionate affair with the married Matty Walker.  This was Kathleen Turner's film debut and she herself may be responsible for that heat wave.  She smolders in nearly every one of her scenes.  Like in The Postman Always Rings Twice, they decide to bump off her older, rich husband and live happily ever after on the inheritance.

Kathleen Turner created one of the greatest seductresses in screen history as Matty Walker.  We had not seen the likes of her since Rita Hayworth put the blame on Glenn Ford in Gilda.  We would not see her equal again until Sharon Stone drove Michael Douglas to sexual distraction in Basic Instinct.   These three temptresses are the holy trinity of film femme fatales.

Like those other films, Turner has less screen time than Hurt, but still dominates the movie.  The film is less interesting whenever she is not on screen.  Hurt is a decent enough actor, but like Ford and Douglas, he cannot compete with his sultry co-star.

Director Kasdan likewise wrote the script and he knows dialogue.  Matty and Ned share some great lines. When Ned first sees Matty and approaches her, she tells him, "I'm a married woman."  "Meaning what?" Ned asks. "Meaning I'm not looking for company."  she responds, but the undeterred Ned comes back with, "Then you should have said I'm a happily married woman."

Body Heat took the film noir genre and upped the sex.  When they first go to Matty's home a drink gets spilled on her blouse. She asks Ned to get her a paper towel.  Ned, trying to be suggestive, says, "I'll even wipe if off for you." Matty takes it to the next step asking, "You don't want to lick it?"  Turner and William became very intimate filming their scenes.   They both do brief nude scenes as well as different sexual positions.   Body heat indeed.