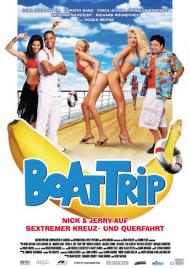 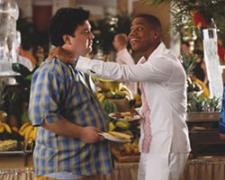 Boat Trip is a movie you may enjoy, if you have really, really, really low standards. Two straight men accidentally find themselves on a boat full of gay guys. Showing them uncomfortable being surrounded by homosexuals is supposedly enough of a punch line.

After being dumped by his girlfriend, Gooding agrees to go on a cruise with his friend, Sanz. The idea is that it will be filled with many available women and Gooding will get laid, and forget all about his ex. They offend their travel agent and end up being signed up for a gay cruise. Gooding falls in love with the only female on board, a dance instructor. They pretend to be a gay couple as a way for Gooding to get close to her. Yeah, it makes little sense.

Every gay stereotype gets touched on. Roger Moore comments on the music, that they, "Always play Liza." To be gay, Gooding is told that he must know all of the lyrics to Gloria Gaynor's "I Will Survive." Later, Gooding finds himself in drag doing a dance to, what else, "I am Coming Out." Some jokes are just too obvious to be funny. While eating breakfast, Moore asks, "Would you like a bite of my sausage?" The one line that stands out is when they are playing the dating game and one bachelor is asked, "What's the most unusual place that you ever made love?" and he responds, "Inside a woman." Yeah, that is pretty much as good as this movie gets.

Although Gooding gets more screen time trying to seduce the dance instructor, Sanz has the funnier story line. So desperate to get off the ship, he shoots a flare at a passing helicopter. He ends up shooting it down. It was full of Swedish bikini models, that the ship rescues. As he is pretending to be gay, they let him put sun tan lotion on them, until his erection gives away his true sexual preference.

He also starts playing poker with some gay men, and over comes his homophobia. Sanz is surprised to find that one of the poker players is a doctor and another a lawyer. So desperate to make a point, one very feminine queer turns out to be a fireman. Exploring a friendship between a straight man and a gay man could be an interesting angle, but Boat Trip is more interested in merely getting Gooding to act gay.