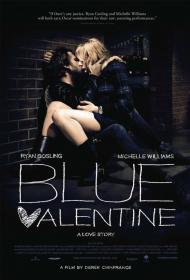 Blue Valentine paints a vivid portrait of one couple’s relationship. It unfolds in a nonlinear manner. We first meet Dean and Cindy as husband and wife with a young daughter on the day their dog gets loose and runs off. This section of the movie covers the events of that day, that night, and the following day. Interspersed, in the form of short vignettes, are scenes of how they met and fell in love.

Dean is a slacker type lacking a high school diploma. His mother ran off and left him and his father when he was ten. He drinks too much and is content drifting through life. He uses humor and perseverance to woo the more ambitious Cindy. She has dreams of becoming a doctor and grew up listening to her father verbally abuse her mother. They are both damaged goods but it is clear in every scene that Dean loves Cindy more than she loves him.

One fascinating aspect of the movie is that we see where Dean and Cindy ended up before we see how they met and fell in love. Where the movie shines brightest is in the intimate moments between these two. The little details of the dynamics of a romantic relationship are truthfully recreated. The script sounds like how people actually talk and the acting by the two stars is riveting. They have several intense arguments as well as moments of tenderness. Gosling and Williams share a believable chemistry.

The one thing the movie doesn’t show us is the middle of this relationship. We see how they met and where they are today but how they got from point A to point B is left to our imagination. It isn’t necessary to the story since anyone that has reached a certain age will understand that these missing years can be summed up simply as life happens.

In one scene Cindy runs into her ex-boyfriend at a grocery store while Dean waits in the car. When she reluctantly tells her husband about the chance encounter he begins to grill her with questions. Cindy says, “He asked me how I was.” With an incredulous tone Dean asks, “And you told him?” It is a funny moment but also tinged with sadness, demonstrating as it does the futility of jealousy.

Ryan Gosling’s Dean is an average Joe. He’s a good hearted fellow who wields his juvenile sense of humor as a shield to get through the day. Their young daughter is completely enchanted by him but Cindy has grown bored. Dean struggles to understand his wife’s changing feelings for him.

Michelle Williams’ Cindy is pretty but suffers from low self-esteem. Clearly she is unfulfilled but doesn’t want to hurt her husband. I found myself rooting for Dean but I could empathize with Cindy as well. Will they or won’t they work things out by the end of Blue Valentine? 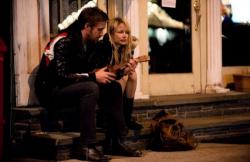 Actually Patrick, the answer to the will they or won't they question never seemed in doubt to me since the finale of the film seems predestined from the beginning.  The mood and the tone of the film, which is starkly real, leaves little room for doubt where it is headed.

Dean and Cindy's story is almost textbook in its attention to detail on how not to form a relationship.  They have a cute meeting and undoubtedly a physical attraction to each other, but other than that they possess little in common.

Dean is juvenile and completely unambitious.  He comes from a blue collar family and seems content to do just enough work to get by in life.  When Cindy tells him she wants him to get a job where he doesn't have to drink at 8 AM just to want to go and do it, he replies that he feels lucky that he has a job where he CAN drink at 8 AM.  You sense he's not entirely telling the truth, but you also sense that he's not going to do anything to change his situation.

What Cindy has in common with Dean is that she too had a fucked up childhood.  Her father was at least emotionally abusive to her mother and her boyfriend at the time she meets Dean also has anger issues, so the soft-hearted, childlike Dean must have seemed appealing to her.  Cindy, with her middle-class background though, wants more from life than Dean and it's only her unexpected pregnancy that really brings them together.

The writing and the acting are superb.  It's understated and real, rather than over-the-top and melodramatic.  While this makes for a very realistic film, it also makes it a rather depressing one.    Both leads deliver award worthy performances.

After so much was made of the sex scenes (the film nearly received a NC-17 Rating), I definitely expected them to be more explicit.  There is some nudity and sexual content, but none of it is done for titilation's sake and is actually rather tame considering the fuss that was made over it.

Although it's well made and well acted, it's also the feel-bad movie of the year that will leave you feeling depressed as you leave the theater and it's not exactly the kind of movie you'll want to rewatch multiple times, unless you're feeling a little masochistic. 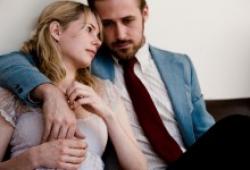 I understand why Cindy first liked Dean.   When Bobby talks to Cindy after wrestling practice.  She is in a wheel chair for the experience.  Bobby makes some comment about her being weird or goofy.  Shortly there after, Cindy and Dean go out on a date where she ends up dancing in a businesses doorway while he plays a ukulele.   Whereas Bobby does not get her humor, Dean certainly does.  She can not only act goofy around him, but he encourages it.  I would have liked to know what Bobby thought of Cindy's pregnancy, but the movie never goes there.  Based on the scene Patrick described, Bobby, or at least the memory of him, lingers in their marriage as a sore subject.

While married with a young daughter and working in a clinic, she is excited by an offer her boss/doctor makes for her to move with him to open a new practice.  She is surprised when she finds out the offer is as much personal as it is professional.  Cindy had, and has, other options than Dean.  She holds all the cards.  As Patrick wrote, he clearly loves her more than she loves him.  The sex scene Scott mentions helps to make this point.  She is clearly not in the mood and just lays there while he muff dives in hopes of pleasuring her.   She is, without a doubt, emotionally selfish.  He had to threaten to kill himself before she admitted to being pregnant.

Cindy and Dean each see the end of their lives through an old person they make contact with.  Dean moves an old widower who has a framed photo of his wedding day and a necklace with a photo of him and his wife.  Cindy takes care of an old relative who is alone and uncaring.  She has no clue that the man across the hall even moved in let alone died.  Like the old man, Dean will likely pine for his wife till the end of his days, and like the old lady, Cindy's selfish ways will come back to haunt her as soon as her looks are gone.  Wihtout her looks she will be alone, with only her daughter coming to visit her.

Blue Valentine is an engrossing, realistic look at two people who ended up together due to circumstances neither one saw coming, and then broke apart due to a complete lack of understanding each other.  I found it a bit slow while watching it but have gotten more out of it the more I think about it.