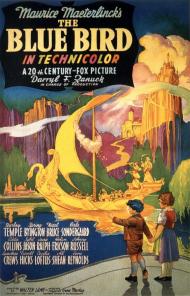 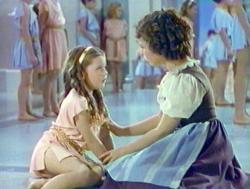 Shirley Temple meets her unborn sister in The Blue Bird.

To paraphrase William Holden in Sunset Boulevard, I last watched The Blue Bird more than twelve thousand midnights ago. I retained only the vaguest memories of it. Now after seeing it again for the first time since approximately 1977, I can honestly say it's pretty dreadful. In fact, after six years of box office magic this was the first Shirley Temple movie to lose money.

This was intended to be 20th Century Fox's answer to MGM's The Wizard of Oz. It emulates many things from that iconic movie but fails utterly to recapture the magic. Based on the 1908 play L'Oiseau bleu by Belgian author Maurice Maeterlinck, The Blue Bird is a fantasy about two woodcutter's children living in a small village in Germany during the Napoleonic wars. Together they share a magical adventure. Like The Wizard of Oz it begins in B&W before becoming Technicolor. Although it fails to match the brilliantly symbolic manner in which the color is introduced in that MGM classic. Here we simply go from a black and white scene to the next one being in color.

A fairy (Jessie Ralph) visits two young children (a girl and her younger brother) after their father goes off to war. She sends them on a quest into the past, present and future, to find the elusive Blue Bird of Happiness. For companions she changes their pets - a cat and a dog - into human form. She also turns their lantern into a beautiful woman (think Glinda the Good Witch) in the form of Light to help them on their journey. They visit several enchanted kingdoms, including The Land of Luxury, before returning home to find that Happiness was waiting there all along. Sounds familiar right? And the similarities with TWOZ don't end there. There is also a scene where the travelers are confronted by human-like trees!

Perhaps oddest of all is the scene set in the future. The siblings meet unborn children of varying ages. There are even a romantic pair of teenagers that get separated by Father Time. Shirley and her brother meet their own unborn future sister who tells them she won't be with them long. Shirley acts completely unfazed by this sad bit of information. She hugs her future sister and cheerfully states, “I'll tell mother to expect you!” WTF!?

Shirley Temple had been originally considered for the role of Dorothy Gale and this was her consolation prize. Audiences didn't want to see America's Sweetheart playing a spoiled brat however. Gale Sondergaard had been the original choice for The Wicked Witch of the West. She was far too glamorous for that part but here she gets to play the wicked cat after she is changed into human form. Eddie Collins makes like Bert Lahr as the dog Tylo that becomes human – only without the costume his behavior is just plain stupid looking. Laura Hope Crews (Aunt Pittypat from GWTW) and Nigel Bruce play Mr. and Mrs. Luxury, while movie buffs will also recognize Spring Byington as the mother.

There was a tragic event connected to this movie. A four-year-old actress named Caryll Ann Ekelund played an unborn child in the future segment of the movie. She has a scene where she tries to sneak aboard a boat. On Halloween, 1939, not long after filming her scenes, Caryll's costume caught fire from the candle in a jack-o-lantern. She died from her burn injuries several days later and was buried in her costume from the movie. Despite all the negativity surrounding this movie, The Blue Bird was remade as a musical in 1976. The impressive cast included Elizabeth Taylor, Jane Fonda, Ava Gardner and Cicely Tyson. Like the original version it was a box office flop.

The cast gives it their all and the sets are extravagant, particularly in The Land of Luxury scenes. The special effects are good for the time, most notably during a blazing forest fire, but The Blue Bird lacks imagination and whimsy. It has an odd tone from beginning to end and Shirley Temple plays quite an unsympathetic child.

Today The Blue Bird is remembered only as an expensive flop that in no way advanced the careers of anyone involved. It is worth watching as a curiosity alone. You will find yourself scratching your head and asking, “What the hell were they thinking?” It's spectacularly awful. 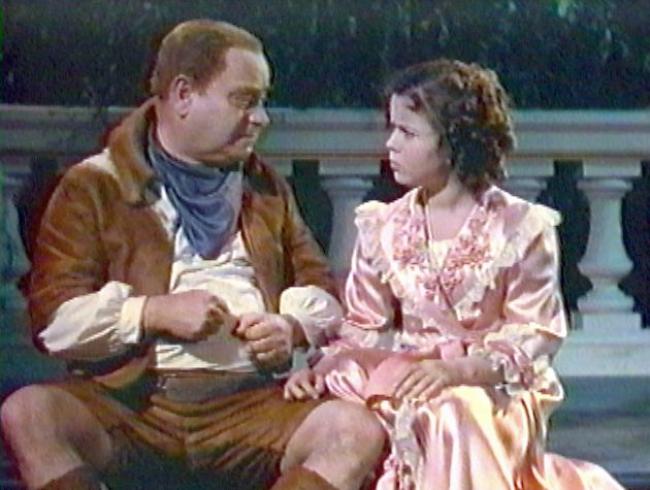 Eddie Collins and Shirley Temple in The Blue Bird.

Nearly everything that I've read about The Blue Bird blames part of the lack of success of this movie on audiences not wanting to see Temple play a naughty/bad child. Maybe it's been said so many times that it's accepted wisdom, but I'm just not buying it, at least as an excuse for the movie's failure. The real reason is because, as Patrick said, it's just plain awful.

The main reason I don't buy the Temple as naughty excuse is because she goes from bad to good pretty damn quick. Apart from the black and white opening, she plays as cloyingly good as she always did. I can remember thinking before that Temple might have been an interesting choice to play Dorothy in The Wizard of Oz since she was closer to the age of Dorothy as described in the books, but after seeing this movie I can only think what a disaster that would have been. She certainly didn't have the singing voice and her Dorothy would undoubtedly have ended up sickeningly sweet.

There are so many bad things about this movie that it's hard to know where to start. The plot is a heavy-handed morality play and seems designed to teach children very broad and obvious lessons like "luxury can't buy happiness". There's very little coherence to the story. The children's journey isn't a progression, just a sequence of situations. The transition from black & white to color makes as little sense as the plot. Temple just goes to sleep in black & white and wakes up in color. The attempts at humor are very poor. Patrick mentioned Eddie Collins as a sort of Cowardly Lion figure, and it's true, but he does it without being funny or charming. He hams it up in a completely over the top manner. Other members of the cast seem to be embarrassed or just going through the motions.

Given that the movie was released in 1940, I'm a little surprised that the studio didn't change the location from Germany to some other European country. In the opening and closing scenes, there's a bit of business with Temple's father being drafted in the army for the expected invasion by France. Since the reverse was happening in real life, this makes the scene rather ironic. Of course in the film, her father is given a last minute reprieve when the invasion is called off.

Patrick mentioned the surreal scene in the future with all the unborn children. What made me laugh is how apparently the future is segregated. The only children they encounter are Caucasian. Do the other nationalities have their own waiting room?

Another piece of interesting trivia I discovered while researching this movie was that when the film was adapted from the 1908 play, studio head Daryl Zanuck insisted that the age of Temple's brother be made much younger than her because in his words, any boy would have to be mentally incompetent to allow a girl to take leadership away from him. And while Patrick mentioned the tragedy of the young actress dying, there was almost another tragedy connected with this story when during a live radio performance of an adaptation of the film, a woman in the audience rose out of her seat and pointed a gun at Temple, but was prevented from firing by the police. The crazed woman believed that Temple had stolen her daughter's soul because her daughter died at the same time as Temple was born. A story made even more bizarre and sad when it was revealed that the woman didn't even know the correct year of Temple's birth. I bring these stories up not only because they're interesting, but because they're far more entertaining than anything this movie has to offer. 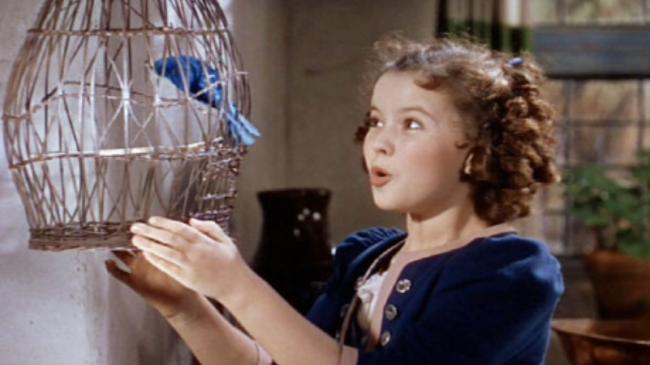 Shirley Temple in The Blue Bird

I did not love this film but I enjoyed it a bit more than my brothers. The blue bird symbolizes happiness and as Patrick noted, the siblings discover that, like Dorothy, they had it all along. "We looked everywhere for it (the blue bird), and all the time it was right here!" They just needed to learn that fact through an moral adventure that is, as Scott described, heavy-handed. When Mytyl asks her father what makes war, he responds, "The same things that make trouble everywhere. Greed. Selfishness. Those who aren't content with what they have."

They visit their dead grandparents by thinking of them. This entire scene is played with a gentle tone. The children ask how can they be alive and the grandparents respond that as long as someone thinks of them they are never truly gone. The grandparents beg the children to stay, but alas, they cannot. Before leaving, they look in a cage full of birds but none are blue. True happiness is not in the past, just sweet sentimental memories.

The land of luxury is a product of this movie's time. America had yet to fully recover from the great depression. World War II would take care of that. Showing the extreme wealthy as lousy parental figures who spoil children was intended comfort food for the out of work, but who were they really kidding? Who wouldn't put up with bratty children to live in such luxury. It is a moral lesson that does not ring true and why does anyone assume that the more money someone gets, the worse parent they become.

As Patrick wrote, the oddest segment is in the future, where the siblings meet unborn children, who are, for some reason, currently at various ages. The scene represents the future as an unknown. Some of the kids are inventors whose lives may impact others. One boy is an idealist who will possibly be born and grow up to be a politician or the leader of some cult. The swooning teenagers get separated and demonstrate that love is never a certainty. Their unborn future sister likewise shows that a long healthy life is likewise not guaranteed. I think Mytyl is simply too young to fully grasp what her sister said to her.

I too once thought Temple a possible better choice to play Dorothy but after seeing this film I think otherwise. Besides being a lesser singer than Garland, Temple would have been too young. I know, Garland at 17 was far older than Dorothy in the books but that is what made the movie work on another level. Garland's Dorothy is more of a young lady than a child. She runs to her Aunt and Uncle for help but they shoo her away as if to say, "Your old enough. Take care of it yourself." She sings "Over the Rainbow" wondering if there is not a better place to be, just as all teenagers tend to ponder. Garland's Dorothy is a girl approaching adulthood but still living as a child. She is starting to see the world around her differently. Her decision to run away and the following adventure/dream is her learning, not only that there is no place like home but, you cannot run away from your problems. Until I wrote this, I never before realized that the 1939 version of The Wizard of Oz is, in its own way, a coming of age tale.

Had the less vocally talented and younger Temple played Dorothy, all we would have is a special effects filled children's adventure film, without any depth. In other words, The Blue Bird..