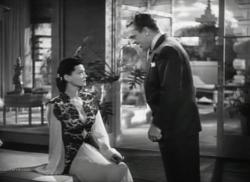 Sylvia Sidney and James Cagney in Blood on the Sun.

Blood on the Sun is a World War II era, anti-Japanese fascism, Film Noir. Made in 1945, Blood on the Sun feeds on the - then - distrust and anger towards the Japanese. Pearl Harbor was still in everyone's mind. Watching it today, it is a history lesson on what our feelings were toward our enemies.

James Cagney stars as an American reporter, Nick Condon. who works at a Tokyo newspaper on the eve of World War II. A fellow American reporter and his wife are murdered for coming upon vital information on Japan's plans for world expansion. Nick soon obtains the same information and finds himself fighting for his life. With the help of a mysterious woman named Iris, Nick attempts to get the information out of the country.

The movie moves along at a great pace and has a decent amount of action. Cagney gets into a few scrapes and even manages a few amateurish judo flips. Thankfully Cagney ends up relying more on street fighting to get by. It's tough guy Cagney at his best. He is well into middle age and appears a bit pudgy, but his trademark screen energy is still there.

The movie is filled with the stereotype of the deceitful, smiling Japanese. Considering that, mere hours before the Japanese attacked Pearl Harbor, Japanese diplomats were in Washington to discuss our two countries relationship, not trusting Japan was understandable. To further show that the Japanese were not to be liked, Iris makes the sarcastic statement that; "Japanese women aren't allowed to think. It's against the law."

The final scene of the movie is a suspenseful dash to the safety of the American Embassy. In front of the embassy gates Cagney is confronted by his fascist pursuers. The Japanese realize that Nick doesn't have the paperwork on him and attempt to make nice in front of some other Americans. "You have saying, forgive your enemies." The smiling Japanese says. "Sure, forgive your enemies, but first get even." Cagney responds.

Let it be noted that this movie was made the same year that The United States of America dropped two nuclear bombs on Japan. Get even indeed! 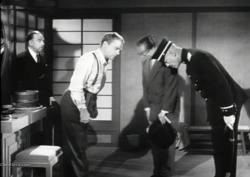 James Cagney in Blood on the Sun.

Like Eric, I enjoyed this movie. I have always been a huge Cagney fan and this movie gives him plenty of good action scenes and trademark rapid speech patterns. Sylvia Sidney is also good as the mysterious Iris. She is at first portrayed as a spy for the Japanese but is later revealed to be a Chinese citizen who aids Cagney's mission and falls for him in the process.

The climax, where Cagney sends her off to safety on a boat with the vital documents in her safekeeping while he stays behind to face the enemy, is well-filmed and keeps you on the edge of your seat.

Based on actual events that took place in the late 20's, Blood on the Sun was the second movie produced by William Cagney Productions, the company Cagney set up with his brother after leaving Warner Bros. Cagney took judo lessons to prepare for the role and this is one of his most action-packed and violent movies.

While there is certainly some stereotyping of the Japanese, it should be noted that the military leaders are portrayed as corrupt and not the Japanese people per se. 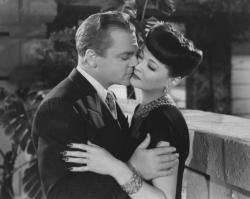 James Cagney and Sylvia Sidney in Blood on the Sun.

This movie is in no way a comedy, but I found the writing credits to be amusing by their length. The screenplay was by Lester Cole, with additional scenes by Nathanial Curtis, from a story by Garrett Fort, based on an idea by Frank Melford. And of course, it's all based loosely on the true story of the Tanaka Memorial document that supposedly detailed Japan's plans for world conquest, although today it is widely recognized as a forgery.

Both of my brothers  seem to have enjoyed this movie more than I did. While I found it to be mildly entertaining, it's certainly nothing great. There are some moments of action and Cagney is his usual charismatic dynamo, but I was simply never drawn into the story.

Having Caucasian actors play oriental characters was never looked down upon as much as black face although essentially they were the exact same thing, and in the Golden Age of Hollywood it was quite common. Nearly all of the speaking Japanese parts in this movie are quite obviously played by white actors. Sylvia Sidney is the least convincing of all. They aren't helped by the fact that the extras are played by real Asians and the lead actors all tower over them. Were there no oriental actors available? With so many Japanese herded into internment camps in the US at that time, it's not like they wouldn't have been hard to find.

Patrick,  I also read that Cagney took judo lessons to prepare for this role, which surprised me since, like Eric, I found his attempts at Judo to be quite amateurish and very staged. Although, since reportedly this was one of the first Hollywood movies to highlight martial arts, perhaps this can be forgiven. During his final climatic battle however, you can see very clearly that a stuntman is doing the more difficult moves.

There are some nice moments of tension and the pacing is fairly brisk. For a movie with so many writers though, it's still not all that compelling.