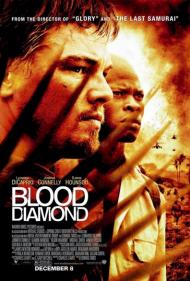 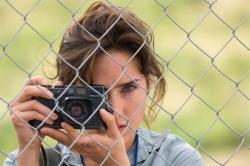 Blood Diamond wants to be an action movie with a message, but it only meets half of its goal. The action is great, but the script lacks incisiveness and so its message is virtually lost, particularly in light of the criticism from both the diamond industry and human rights group, who each complain about different aspects of the story being inaccurate.

Djimon Hounsou plays Solomon Vandy, an African fisherman living with his family in Sierra Leone during the late 90s. The country is in a state of civil war with the government and the rebels fighting for control of the diamond fields, with foreign diamond companies trying to deal with who ever has control of them at the moment. Solomon is captured first by the rebels, who force him to work for them mining diamonds. While working, he finds and manages to hide an enormous pink diamond, but the field is soon overrun by government forces, and they in their turn, capture him and throw him jail.

While in jail, he meets Danny Archer (DiCaprio), a diamond smuggler from South Africa. Danny ends up bailing out Solomon, with the hope that he will lead him to the diamond which he overheard being talked about. The two of them agree to team up; when Danny promises to help him find his family if Solomon will lead him to the diamond. The majority of the plot is their trek across the war torn country on their quest to find it. Along the way they meet up with Maddy Brown (Connelly), an American journalist covering the civil war, who helps them on their journey.

With the release of The Departed earlier this year and now Blood Diamond, DiCaprio finally seems to have shaken off his youthful roles and seems able to play grown men. You could argue that Danny Archer is a bit of a stereotype of the white man in Africa, but he plays the part very well. He's both ruthless and charming. His accent is a bit iffy at times (at first I thought he was supposed to be Australian), but doesn't detract from his performance. Connelly is as beautiful as ever and delivers the kind of quality performance that I've come to expect from her, even if she does seem a little too beautiful to be the action journalist that she's portraying. And Hounsou proves that his Oscar Nomination for In America was no fluke.

One problem with this movie is that in trying to convey its message, there are too many scenes of dialogue that tend to drag the movie to a halt and increase the film's running time. It is in the battle scenes that the film truly shines. Danny and Solomon's escape from the capital is one of the movie's highlights, but there are many other equally good moments of tense action.

This time of year every movie seems to be vying for awards. To me, Blood Diamond isn't that type of movie. It's an action film with higher aspirations, when it should have been satisfied with what it is. 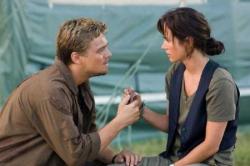 I wasn't bothered by the political and/or social commentary aspirations at all. In fact I thought they did a good job of keeping the story personal. To me what slowed the action down were the scenes between Archer and Maddy. After all this is really Solomon's story. Once Maddy appears on the scene the focus shifts and the story begins to meander a bit. It seems weird to me that Hounsou's role is considered a supporting one by the Academy. The movie begins and ends with him.

I agree with Scott one hundred percent that the action scenes are where this Diamond sparkles. They are fast paced and tension filled and beautifully shot and acted. Both DiCaprio and Hounsou deserve their Oscar nominations. DiCaprio makes like a modern day Errol Flynn. He is both dashing and ruthless but ultimately heroic. Hounsou has a very powerful scene with his son at the movie's climax.

With the right 20 minutes trimmed off this would be a 4 star classic.

I too was touched by Hounsou's scene with his son. He certainly deserved Oscar mention. DiCaprio, as Scott wrote, struggled to maintained his accent and was far too well coiffed to be someone who lived the life he did.

The movie would have been a great action/adventure film had it just set out to do that. The part I thought should have been edited are the scenes right after Danny gets out of jail. He gets Solomon out as well, so they can meet and he can find where he hid the diamond. But they do not meet right away. When they do finally meet, it takes far too long for them to get moving in the right direction. As Patrick wrote, Hounsou does not have a supporting role. The problem is that too much time is given to everyone individually and not enough time to the three as a group. That is where the entertainment is and that is where the movie should have centered.

The politics of the movie needed to be their, somewhat, as they are the motive for all that happens. Although, to indite the consumer is ridiculous. The end of the movie says that we should only buy conflict free diamonds. How in the hell are consumers ever going to know for certain where a particular diamond actually came from and how it really got to that display case in the jewelers window? The politics were necessary but not the editorial.