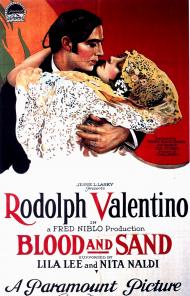 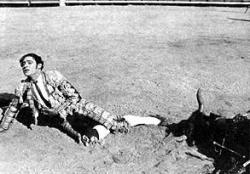 This silent love story is a three-hanky weeper. Poor shoemaker's son in Seville makes good as a Toreador, marries his childhood sweetheart and becomes a nationally acclaimed celebrity. Unfortunately he falls for the charms of a rich, exotic vamp and helplessly follows her down the well-worn path of self-destruction.

Although Valentino will always be remembered, first and foremost, for his over-the-top lovemaking in The Sheik, it is in this movie that he gives a much finer and far more subtle performance. He captures the joys of success experienced by the young Juan, as he becomes a famous matador in the bullring; then shows his frustration and sorrow as he vainly tries to escape the clutches of the wicked Dona Sol (Nita Naldi doing her best Theda Bara).

The final scene, where Juan is gored by a bull and dies in the arms of his forgiving young wife, is all the more poignant in light of the fact that in less than four years time Valentino would be dead in real life. His was the first modern superstar death. There are at least two documented cases of women committing suicide upon hearing the news and more than 80,000 grief stricken fans caused a near riot at his funeral in New York City. This was, after all, to paraphrase Norma Desmond, "Before the Pictures Got Small". Movie stars then were Gods and Goddesses, not mere mortals that walked amongst us, and Rudolph Valentino was, perhaps, the greatest of them all.

But don't take my word for it, watch Blood and Sand and decide for yourself. 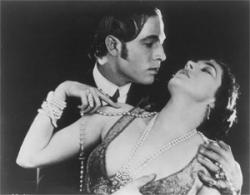 A common theme in early movies seems to be the vamp character.  Here, Juan is led astray by Dona Sol who has him wrapped around her finger.  It reminds me of original sin.  All of the blame is laid upon the woman and the man is virtually absolved of guilt by the simple fact that apparently he had no choice once he fell under the spell of the vamp.  The wife almost invariably ends up forgiving her straying husband once he has seen the error of his ways.  Was this the male filmmakers of the time trying to come up with excuses for their infidelity?  Through most of this movie I kept thinking in regards to Juan that he needed to man up and grow a pair and just tell Dona Sol to fuck off, but apparently his bravery doesn't extend further than the bull ring.

If I had no knowledge about this movie or about Rudolph Valentino, I would never guess that it was considered a classic and I would never in a million years guess that he was a sex symbol of the magnitude that he clearly was.  He's only okay looking and while it was difficult to tell because the print wasn't that clear, he looked at times as though he had a unibrow.  He also, as I said, is a total wuss in this movie when it comes to his dealings with women.

After recently watching 1913's Fantomas, I find it interesting that Blood and Sand, made almost a decade later, seems more dated.  Granted the technical aspects of this movie are superior and there are close-ups and bullfights.  The acting though, seems terribly overwrought and hammy by comparison.

I'm sure that at the time of its release, this movie was found to be exciting and emotionally stirring, but now I simply found it more interesting and a little puzzling as I tried to work out just how Valentino caused such a sensation.  I guess sex appeal doesn't always transcend the decades.

Recently Eric and I had a debate about reviewing movies and how much you need to take into account the filmmaker's intentions when criticizing a movie. While I think that a movie should be able to be reviewed simply on its own merits, when viewing silent movies you definitely have to make allowances for the intentions and technical limitations of the time.  It makes it difficult to chose how many stars to assign it.  For historical significance maybe it deserves 4, but in terms of entertainment value today, it deserves far less. 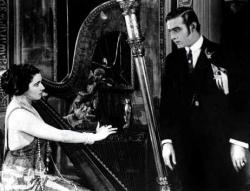 Blood and Sand opens with a title card that speaks of how the love of bull fighting is ingrained in the Spanish people.  I twice visited Spain and on both trips attended a bull fight.  The fans in the arena certainly were excited over it.  They cheered loud and exuberant over a toreador that made a clean kill and far less when it took more than one stab.  If he did a good job an official would cut off an ear from the dead bull and present it to the toreador.  After one toreador did a great job, he was rewarded with a bull's ear and the crowd roared.  As in a scene from this movie, he walked around the stadium as fans threw him flowers.  I clearly did not understand all the nuances of the sport, but obviously the crowd did.

In Blood and Sand the bull fight scenes were a let down.  The killing of the bull in his first fight happens off screen.  His first big match that earns him fame is not shown at all.  A few brief clips of a real Toreador are used in place of Valentino in the scene where he first sees Nita Naldi.   He stabs the bull with his sword, as is customary at the end of a bull fight.  However, the bull is shown jumping around after being stabbed.  That is hardly a clean kill, yet the audience reacts as if it were.

Although I go on about the bullfights, Blood and Sand is all about sex.  Early in the film Valentino the virgin turns down the flirtations of a dance hall girl.   He marries his innocent girlfriend.  The scene of them walking to their bedroom on their first night together is very melodramatic.  They have two children.  He meets Naldi, who eventually seduces him and be becomes obsessed with her sexually.

I do not get the smoking scene.  Are they smoking cigarettes or drugs?  Much is made of it, with a feminine acting manservant, dressed in hot pants, lighting every ones cigarette/joint.  He and Valentino exchange queer looks.    They again share a moment when the servant prances by Valentino a moment later.

Rudolph Valentino was the movies first boy toy.  He always played men ruled by sex.  He was smitten by Gloria Swanson who turned him down because she was already married in Beyond the Rocks.  He kidnapped and raped women in The Sheik until Agnew Ayres tamed his desires.  Here he is caught between the virtue of his wife and the passionate sex of the vamp.

According to Blood and Sand sex can be exciting yet dangerous, just like bull fighting.