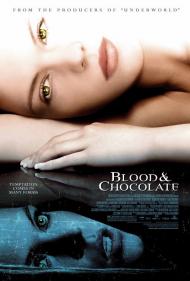 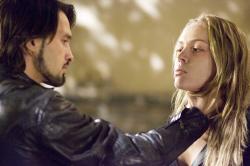 Olivier Martinez in Blood and Chocolate.

Blood and Chocolate first and foremost reminded me of An American Werewolf in Paris (1997). Both films are about an American guy traveling in Europe who meets a girl who is secretly a werewolf. In both films they fall in love and she has to protect him as much as she can from other werewolves. Bruckner and Hugh Dancy even look similar to Julie Delpy and Tom Everett Scott. If you can get past the unoriginal plot, then you may enjoy this decent film, yet uninspired movie.

Vivian is a young woman/werewolf who is promised to the leader of the werewolf pack. Before she can give birth to a litter of his puppies, she meets and falls in love with a traveling American artist, Aiden, who is in Romania studying werewolves for a graphic novel he is drawing. She works at a candy store and thus the film's title. Or as her Aunt/werewolf/boss says, "I had the taste of blood and chocolate in my mouth, one as hateful as the other."

Member's of her pack haunt the city at night occasionally killing a tourist. The leader of the pack discourages the killings but organizes a quarterly "hunt" to keep the pack under control. The hunt is when they capture a human and take them to a place in the woods. The victim is told that if he can run through the woods and cross the river before getting caught they will live. The person runs off while the pack all transform into wolves and give chase. Of course the big climax is when Aiden finds himself the target of the hunt.

As a horror movie there is plenty of night scenes filled with creaking noises and moving shadows. The film is ripe for scares but none really come. The gore is at a minimum. Considering that werewolves are doing the killing you would expect more blood. Sex is nearly nonexistent even though several of the killings are sexually motivated.

Even though An American Werewolf in Paris is hardly a great film, Blood and Chocolate is still unable to rise above it. It is less scary and has none of the humor, such as when Tom Everett Scott wakes up in the cemetery next to the dog? You have to see it to appreciate it.