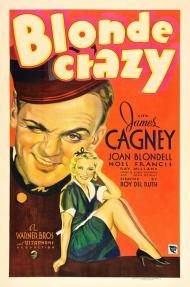 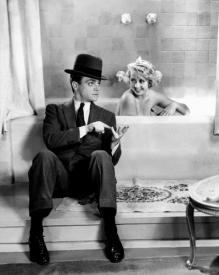 Blonde Crazy isn't the best of the seven pictures James Cagney and Joan Blondell made together but it does contain their best work as a team. He's Bert a hotel bellboy on the take and she's Anne an equally unscrupulous chambermaid. Cagney and Blondell were a perfect match in both looks and attitude, and one of the great movie teams of the Pre-Code era. Check out the racy scene where she's taking a bath while Cagney sits by the tub (see photo). They had begun their screen careers together in 1930's Sinners' Holiday and their final picture together, He Was Her Man came out in June of 1934 just as the Production Code was being put into effect.

Pretty much everyone in the movie is crooked. As Bert puts it to Anne, “Chivalry is dead. This is the age of chiselry.” This anything goes morality would never have gotten past censors just a few years later. Together Bert and Anne con guests of the hotel, until one day they themselves get taken by a big city grifter played by Louis Calhern. But revenge is soon in the offing and Bert and Anne wind up in New York with a plan to exact it. A young Ray Milland shows up as Cagney's rival for Blondell and he turns out to be rotten to the core. After a few turns, and one unexpected plot twist, the story comes to a somewhat disappointing ending, which I won't give away.

Roy Del Ruth keeps the story clipping along. This was the first of six movies he would direct in which Cagney acted. These included two of the next three pictures Cagney made, Taxi and Winner Take All (both 1932), and Lady Killer (1933). Star and director would reunite nearly two decades later for The West Point Story (1950) and Starlift (1951), although in the latter film Cagney made just a cameo appearance. Ruth has the distinction of directing Cagney in the two movies where he comes the closest to saying his often imitated line, “You dirty rat.” In Taxi Cagney snarls the line, “you dirty, yellow-bellied rat”, and in this movie he sneers, “Mmm, that dirty, double-crossin' rat!” How many young boys left the theater repeating those lines over and over while mimicking Cagney's distinctive voice?

The rest of the cast provides stellar support. Louis Calhern was one of the great villains of classic Hollywood. He played the shady con man better than just about anyone else. Ray Milland has a smaller role but he's also quite good as a man who is at first presented as noble but turns out to be less than law abiding. Noel Francis and Guy Kibbee have small but memorable roles, and Ward Bond and Charles Lane pop up in uncredited bit parts.

Blonde Crazy is early Cagney. This was just his seventh movie and it marked the first time he was cast to play the main character. Although he was the eventual star of The Public Enemy (which had come out earlier that same year), he had originally been hired to play the supporting character in that seminal gangster picture. Blonde Crazy was his first true leading man role. It also allowed him to play comedy for the first time. Throughout the film he calls Blondell, “Honey” in a funny southern accent in imitation of a ditzy character played by Polly Walters.

Joan Blondell was a great star with an original personality. She was down to earth and a good sport and she had a terrific figure, which Cagney wrote about in his autobiography Cagney By Cagney.

As I wrote before, Blonde Crazy isn't the best work either of its stars did in their long careers, but it does contain some of their most enjoyable work together. 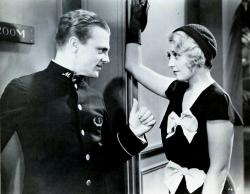 Cagney and Blondell do make a great screen couple. They're the rougher, slightly lower class version of Gable and Harlow. The sparks and the countless slaps that pass between them creates such chemistry that it seems silly that it takes them so long to acknowledge their feelings for each other in this story. Patrick mentioned the many films they made together, but their partnership extended even further back than their Hollywood years to when they appeared together on Broadway. Their off-screen friendship helps them seem completely at ease around each other on-screen. They are definitely the best thing this movie has going for it.

The premise of the film offers promise and the story of two or more con artists working their way across the country has been redone many times since. However, the execution of that premise feels very rough in this telling and the ending is horrible. Cagney's fast talking sharpie and Blondell's beauty are the perfect combination for fleecing their victims. Watching these two work their cons while verbally sparring with each other is classic entertainment.

While there are definitely some pre-code elements to the story, the ending feels morally enforced. You'd never see Cagney fondling a woman's underwear or hint at hanky-panky between Blondell and their male victims in post-code movies. However, the retribution that comes at the end of the movie feels like something you'd see mandated by the Hayes offce. What audiences want to see happen at the end of this is for the two of them to ride off into the sunset, romantically paired, but still swindling their way through life.

Cagney is his usual swaggering self, but you can tell this is early in his career. His performance still feels a little rough around the edges. He has that cocky charm to carry him through, but his persona isn't quite fully formed yet. Blondell is all charm. Her saucer sized eyes, shapely figure, and quick wit make her appealing in every way. The rest of the cast, as Patrick said, are quite good, but your attention rarely strays from the two stars.

They certainly knew how to crank out movies in those days. As Patrick said, this was Cagney's 7th movie. It was Blondell's 11th. What's truly remarkable about that is the fact that they'd both only arrived in Hollywood in 1930. Blondell described in her biography of those early days that she would arrive at the studio at 5AM, work well past sunset, and with only Sunday as a day off. This frenzied pace may have helped the stars of the day perfect their acts, but it wasn't a friend to the scripts. There's a rough feel to the story and the editing that can probably be attributed to the fact that the entire film was churned out in just a couple of weeks.

Still, whatever weaknesses there are to this movie, they're easy to forgive thanks to its two leads. And at just an hour and 20 minutes, it never really has time to wear out its welcome.