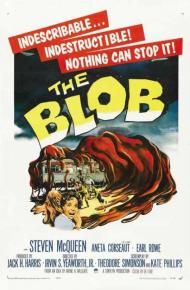 A young Steve McQueen in The Blob.

Some movies just don't live up to the childhood memories we have of them. The Blob is one such movie. I recently caught this low budget fifties horror movie on Turner Classic Movies. I hadn't seen it in at least 25 years. As a kid I remember being terrified of The Blob. Watching this low budget cheesefest now it plays like high camp, and it is almost impossible for me to believe that I once found this movie scary. As Turner host Robert Osbourne commented, the creature looks like a rolling glob of cherry pie filling. About the only redeeming quality this movie has is a young Steve McQueen as its star.

A mysterious meteor lands in a field near a farmhouse outside of a small town. An old man goes to investigate and winds up with a slimy ball of goop attached to his hand. A young couple find him, and give him a ride to the local doctor's office. Before long the old man is completely consumed by the strange creature that continues to grow, devouring every living thing it comes in contact with. After this the creature goes on a rampage through the small town. In the movies most famous scene it enters a movie theater and sends hordes of screaming teenagers running for their lives.

It appears that nothing will stop the alien life form from killing everyone in town. They try shooting it, electrocuting it and even throwing acid on it. Finally Steve McQueen discovers that it doesn't like the cold. Eventually they freeze the creature and send it to the North Pole. The producers were obviously planning a sequel since instead of 'The End' at the movies conclusion they put a question mark.

This one is for McQueen fans only.

Jane and Steve just want to go parking, but end up saving their hometown from a hungry gelatinous alien.

There is really not very much to this movie. The plot, special effects and acting are all quite amateurish. There are very few sets and costume changes. This movie was obviously made on a shoestring budget.

The one and only thing I got out of it was watching Steve McQueen make like James Dean from Rebel Without a Cause. Both actors played clean cut kids who get peer pressured into racing their cars, only to get into trouble with the police. Of course they do not get into serious trouble, as the boys who raced him are more into harmless pranks than armed robbery.

Although everything about this film is quaint, I can certainly see what the youth of the time saw in it. The movie takes place all in one night as the teenagers stay up late, drive around town and do battle with an alien. Steve, Jane and their friends are the heroes who save the town, even though they struggle through most of the film to get the adults to listen to them.

By today’s standards, much of The Blob is laughably pathetic. As a time capsule it shows how teens dressed and sort of acted at one time. It also shows Steve McQueen at an early stage in his career. This is not his best work but it does show just how influential James Dean was to his generation and fellow young actors of the time. 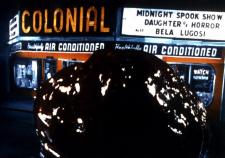 McQueen does play a clean cut kid, but what made me laugh about his performance is that he was 28 years old when he made this movie and it shows. The actress who played his girlfriend Jane was 25 and looked older. Why have them playing high-school students? Why not just say they were in their 20s?

Sure this movie is cheesy and like you Patrick, I can remember being scared by it as a kid. And yeah, obviously it isn't scary at all now, but somehow I didn't mind all that much. I still managed to enjoy it. Granted, part of the fun was laughing at the movie instead of with it, but at least I was laughing.

I also enjoyed the time capsule element you refer to, Eric. The fashion and the cars and the attitudes all seem downright quaint today.

One thing I actually thought the movie did well was create a group of distinctive characters. From the two police officers (one a hard tight-ass, the other an understanding older-brother figure) to the parents, and each of the teen-agers, everybody seems to be a fully rounded character. Even the mechanic who gets eaten by the Blob; appearing in just one scene, manages to be fully-dimensional.

You also have to give this movie credit for creating a story that has been re-used so many times and remained quite famous despite its weaknesses. The idea of a small-town being invaded and a group of townsfolk having to deal with an alien menace all in one night, has been used in many movies since this one.

This is definitely one of those movies that has lost something in the intervening years since its release, but if you watch it with your tongue in your cheek, you can still find stuff to enjoy in it.