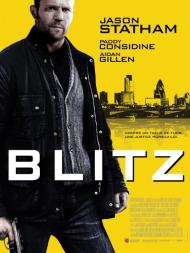 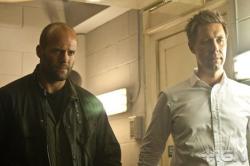 Blitz starts out promising.  Jason Statham, playing hot headed police officer Brant, wakes up one night in his apartment to see three young men trying to break into a car on the street below.  He walks out carrying a hockey stick and proceeds to teach them a lesson.   The incident makes for bad press, getting him in trouble and he gets sent to counseling.

We meet plenty of other police officers with their own burden's to bare.  There is the cute young officer, Falls,  who has a drug past.  She plays big sister to a neighborhood gang member.  There is also the veteran cop who recently lost his wife.  Paddy Considine plays sergeant Porter Nash, who transfers to the same precinct as Brant, with a promotion as the new acting inspector.  His baggage is that he is a homosexual and must deal with the other cops reaction to that.  Even Brant calls him a "Nancy boy" to his face. He and Brant team up and discover they have something in common.

The movie gets going with a serial killer who targets the police, killing them one at a time in often bloody fashion.  This leads to such predictable investigations as Nash looking at a video of the killer running away, with a hoody covering his face.  Nash remarks, "He knows where the cameras are."   Meanwhile, Brant meets with an informant who just happened to hear someone say something that sounds suspicious.

The plot spends far too much time on secondary characters.  Falls goes on a date with someone who can help her friend.  The serial killer, calling himself Blitz seeks notoriety by contacting a reporter after every kill.  The reporter likewise starts to investigate, meeting with the same informant as Brant.

The tough, drunk Brant and the tidy Nash make an interesting team.  The film should have stayed focused on them.  Nash has to put up with Brant's unapologetic attitude.  When talking to the reporter who found a dead body in a bathroom, Brant asks, in front of Nash, "What, are you a couple of George Michael's?"

Although Statham has a few less fight scenes than we are used to, he is still good playing his stock tough guy character.  Aidan Gillen though, nearly steals the film from him as the over the top cop killer.  He has a kind of swagger normally reserved for rock stars.  He is as desperate for fame as a Kardashian, and just as obnoxious.

Blitz never saw a U.S. theatrical release.  This could be due in part to the accents.  I watch plenty of British movies and television but had to replay several scenes more than once in order to decipher what is being said.  It did reveal one interesting mistake though.  When Nash is trying to restrain Brant, he calls him, "Jason."

Blitz is based on a novel.  I have no idea if it follows the book's plot, nor does it even matter.  The screenwriter should have kept the story on Brant and Nash.  They are from different worlds, yet have had similar experiences.   Nash however, disappears too often into the background leaving Brant's one dimensional character to bully his way through one situation after another.