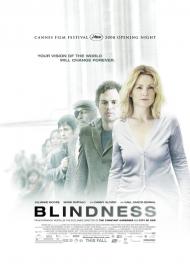 A blind man has a gun. You better give him your money and your women.

Blindness is one of the pretentious films that tries to say something but ends up making little sense. A disease that caused instant blindness spread very quickly in a large city. Those with the blindness were put into a facility that appeared to have no one in it to care for them. One woman went along with her blind husband and ended up being the only person quarantined who could see.

Rations ran low and tempers flared as everyone got frustrated. One ward decided it would run the whole place because one blind moron had a gun. They demanded money and valuables from the other wards in exchange for food. When the valuables ran out they demand the other wards send their women as whores.

The woman who can see ended up taking care of her husband and pretty much everyone else in her ward. When the gun toting ass hole demanded the women, she went along as if there is no other option. HELLO! He is blind. Hit him over the head with anything and take the dam gun. In the crowded ward he could not tell you were even moving about.

We were supposed to feel sorry for this woman, yet she had the most thoughtless line in the movie, "The only thing more terrifying than blindness is being the only one who can see." To be fair, Danny Glover has one that makes even less sense, "I know that part inside you with no name, and that's who we are, right?" What the F%$#!

The wife eventually took a handful of inmates out of the facility and into the city. There they found a world of chaos as everyone seemed to be blind. Everyone acted like animals fighting over food. She joined in and scavenged up some food. She then took everyone back to her and her husbands home for a nice candle lit dinner. One of the blind men got his sight back and the movie thankfully ended.

This movie seemed to want to say that mankind is just a step away from complete disorder, but the message got lost in the ridiculous plot. Just because someone is blind and has a gun, and thus power, does not mean he would be an asshole. Even if he is, why does everyone in his ward go along with him? Hey, we're blind, and we're up for raping some women today. The guy with the gun is blind as is everyone else. How do they even know he has bullets? They give him all of the power based on his word. They have the only person in the building who can see and they act helpless.

What an amazingly stupid film!