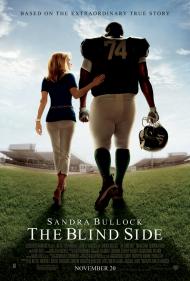 S.J. and Michael share some of the best scenes.

Throughout history there has always been great disparity between the haves and have nots. The Blind Side suggests that there is something to be gained by the two groups interacting with each other. It is clear what Oher got out of being with the Touhy's, but it is a bit vague on how he affected them. Other than getting them to see poverty close up, the movie never says what they actually learned from him.

Big Mike is a homeless kid from the projects of Memphis. It is a slum area of minorities and drugs. He tags along to a private school with his friend and his friend's father, to get his friend enrolled there. The coach takes one look at Big Mike and encourages the school board to enroll him, even though his GPA is less than 1.0. Big Mike only seems comfortable around the younger kids at the all white school. One such youngster is an outgoing boy named S.J. One rainy night S.J. and his family come across Big Mike walking along the road. They take him home for the night, and then Thanksgiving weekend, and then for good. They eventually become his legal guardians.

Big Mike is shy and at first very uncomfortable in the Touhy’s large elegant home. The only piece of information they can get out of him is that although everyone calls him Big Mike, he does not like it. The mom, Leigh, decides to call him Michael from then on. Leigh is key to Michael. The only shred of family he had before the Touhy's, is a memory of being taken away from his crack whore mother when he was seven. He trusts women more than he does men, and as such, Leigh and he connect.

Leigh often lunches with some rich white society ladies. At first they act very condescending to her news of bringing home a young black man. But it is more out of ignorance that actual malice. She tells them that Michael is changing her life, but the movie never says how. At another point, some black guys are very obnoxious to Bullock when she goes to the projects looking for Michael. She is as out of place there as Michael is in her world.

Bullock is good as the opinionated matriarch. Leigh is never shy about expressing her opinion. Her showiest scene is when she looks for Michael in the projects. A guy who recently got his ass kicked by Mike calls her a 'bitch," to which she in turn calls him a "bitch" and informs him that she is in the same prayer group as the DA, is a NRA member and is always packing.

The movie never states the Touhy's political affiliation but the makers of this film must have felt it was obvious that a rich, white Christian NRA member must be a Republican. When they hire the tutor, the tutor feels compelled to warn Leigh that she is a Democrat.

The Touhys are a very well-to-do family. They are able to hire the tutor to work with Michael to get his grades up. They even pay her to live near him when he goes to Ole Miss University. With so many people pulling for him, and the Touhy's money, Michael was able to become a person he never dreamed of. Because of his athletic ability he became an All-American offensive left tackle and was drafted into the NFL.

Michael Oher's story shows that success needs two important ingredients. The first is that the person themself must want something bad enough to work for it. The second is that some one along the way has to belief in them, and it sure doesn't hurt if that person is rich. 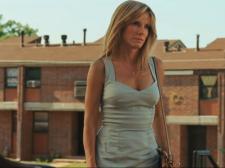 Sandra Bullock as Leigh Anne Tuohy in Blind Side.

Frankly I was blind-sided by this movie. The marketing for it made it look sappy, melodramatic, filled with stereotypes and made it seem a little patronizing; more as if Bullock was adopting a pet rather than a son. Instead, it's a feel good movie that belies its ads and with a performance by Sandra Bullock that is truly deserving of the award nominations that have been given to her. It's not surprising to me that this movie's second weekend box office was actually 17.6% higher than its opening weekend. People needed to spread the word about it to overcome the awful marketing.

If someone told me Eric, that they were southern, rich, Christian and a member of the NRA, I know I would assume they were Republican. To me, the movie wimps out a bit by not stating it explicitly. This is a movie that espouses family and Christian values, for Hollywood that's quite a stretch, but I guess it didn't stretch quite far enough to actually use the R word.

Sandra Bullock is great. I've never been a huge fan of hers (is any straight man?), but that could be due to her film choices. This part suits her down to the ground. She has comic timing, but she also seems to have a depth of emotion that for most of the film she keeps just below the surface. The showy scene you mention Eric is one of those movie moments that is meant to make you go, "Yeah!", but to me it almost seemed out of place. It's a little too showy.

My only complaint about the movie is that some of the characters are under-developed. McGraw as the husband is there to do whatever Leigh Anne wants and I never really got a feel for his character. The daughter Collins is likewise presented as a bit of a blank slate without any distinctive character traits. SJ, the youngest son, on the other hand is fully developed and one of the most entertaining parts of the film.

Perhaps the most amazing thing about the story is that there is remarkably little dramatic conflict. Being so used to Hollywood's tendency toward melodrama, I kept waiting for some new obstacle to enter the plot, but every time something like that happens, the obstacle is quickly and smoothly removed. It truly is a feel good movie from start to finish.

Sandra Bullock and Quinton Aaron have a dramatic moment.

No, Scott they don’t actually use the R word, but Tim McGraw as Leigh’s husband Sean does say, “Who would have thought that we would have a black son before we knew a Democrat?” This movie is all about reaching across lines, whether racial, class or political. Bullock is good although I don’t think this is an Oscar worthy performance. And Scott, I don’t know any gay men who are huge Bullock fans either, her fans must be women.

This is certainly a feel good movie and it’s true that the writers don’t overdo the drama. But in interviews the real Michael Oher has stated that the movie exaggerated his lack of knowledge about football. In the movie all it takes is one good pep talk from Leigh and Michael is suddenly an all star defensive lineman.

The Touhy son is funny but too precocious. The scene where he is teaching Michael how to run a play using bottles of condiments is a bit cutesy. Still this is one movie that wears its heart on its sleeve and you get exactly what you paid for. It’s not surprising that Blind Side was a big hit at the box-office. It tells a heartwarming true story and features two of America’s favorite things, football and Sandra Bullock, our current reigning box office queen.