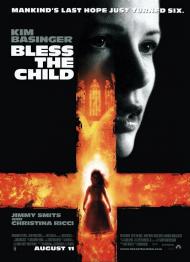 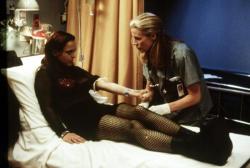 Christina Ricci and Kim Basinger in Bless the Child.

The concept of Satan can be a powerful and frightening movie theme. Remember The Exorcist, Rosemary's Baby and The Omen? Take my advice; rent one of those movies instead of wasting your time on this one. It seems Hollywood can no longer make this type of film without over simplifying the good vs. evil aspect or employing the cheesiest of special effects. Recent examples of this include End of Days and Stigmata. Add Bless the Child to the list.

Kim Basinger stars as a woman raising her junkie sister's daughter. Unfortunately a Satanic cult wants the child. Apparently she was born on the day that the star of Bethlehem reappeared in the sky after two thousand years. Of course this means that she will become a famous prophet or saint; unless of course Lucifer gets her first. This movie unfolds with absolute predictability. The characters are all completely one-dimensional and what is supposed to be scary comes across at best as mundane and at worst as stupid. Jimmy Smits plays a FBI agent who was formerly studying to be a priest (what else). Though he and Ms. Basinger prove themselves to be old troupers neither of them can overcome the absurdity of the script. Cody, the child, who of course is afflicted with a form of autism, basically spends the movie hugging people and smiling like Annie looking at Daddy Warbucks.

Statues of gargoyles are used throughout the film, usually underscored with scary sound effect voices. Sounds frightening doesn't it. Even the talented Christina Ricci, who has arguably the best lines in the movie, not that that means much, is unable to salvage this fiasco. And Kim Basinger is throwing away whatever clout her Oscar win has given her with both hands, by her choice of movies. Her hair, in this film, never seems to get mussed no matter what ordeal she is going through.

The one computer generated special effect, which I enjoyed, comes near the movie's climax. Thousands of rats join together and transform into the big guy himself. Satan that is, not the other big guy, who is of course represented by flickering rays of holy looking light.

The best thing I can say about Bless the Child is that the cast is talented enough to play it straight. I just don't understand why any of them are in it. 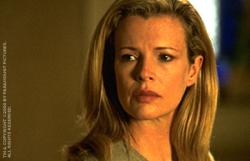 Kim Basinger, probably thinking that she saw more realistic looking rats when she was on drugs, stars in Bless the Child.

This cheesy b-movie is every bit as bad as Patrick described. In fact, it might even be worse than that. It's one of those movies that is so bad that if you watch it in the right frame of mind, you can actually enjoy it. You just have to revel in its badness.

There have been other, better movies along these same lines as Patrick indicated. The Omen is the closest comparison, although here it is the birth of a good child that sets the events in motion rather than an evil one. Such a plot needs to be treated very seriously and carefully for it to work or it can so easily slip into campiness and the script for Bless the Child just isn't up to the task. And none of the well known faces here can come close to the gravitas that Gregory Peck provided in The Omen. Ian Holm, who has a brief cameo, gives it a try and gets the movie's best line, even though it's a ripoff of a line used in other, better movies, when he says, "The devil's greatest achievement is that people don't believe he exists. Nowadays, the concept of evil is politically incorrect."

Eric has mentioned several times how Hollywood rarely shows Christianity in a positive light, but horror movies are the exception. When demons, vampires or creatures of the night are around, it's almost invariably the Catholic church that is turned to for a solution. It also always seems that the protagonist of these sorts of films is a former believer who has started to doubt and question his faith. Smits plays that character here, but we never learn enough about him, nor does the script provide him with an opportunity to really delve into that side of his character.

The CGI special effects add to the silliness of the story. Unfortunately, they are meant to provide most of the scares, but they are so obviously fake that they prompt laughter rather than screams. The scenes with the rats, which could have been creepy if done with real rats, just look like a cartoon superimposed on the live action.

As Patrick said, the cast is talented and they all play it quite earnestly. They're trying to take it seriously, but the script and the effects are so bad that it just accentuates how bad they are. It's as if they all went to the Leslie Nielsen school of acting, where they say silly things in a very serious manner.

Hollywood tried to capitalize on the end of the millennium with several end of the world movies, none of which were exactly classics. That doesn't mean however, that if you watch this one in the right frame of mind that you can't enjoy it. It's a perfect candidate for the Mystery Science Theater 3000 treatment. 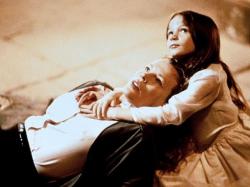 Kim Basinger and Holliston Coleman in Bless the Child

Bless the Child is one of the most overt Christian films to come out of Hollywood in a long time, and we have not seen its ilk since.  It starts with a prophet meeting Maggie on a bus, who tells her of the star in the sky. Maggie says, "I don't know, I - I'm not sure I believe in that kind of thing." The woman continues, "Oh, that don't matter. It's there if you believe or not believe. It don't care." Ricci also acts like a prophet guiding Maggie on her mission. "They believe she's the one they have been looking for. She's going to lead people to God, Maggie. Eric is going to try to change her, and if not... "

Patrick mentioned that gargoyles are everywhere like lurking demons. Yet there are also angels everywhere who help Maggie and John. There is the woman on the subway platform and the man who pulls Maggie from the car. All disappear as soon as their good deed is done.  A janitor/angel helps John at one point and says to him, "You're not working alone tonight. A good man is never alone in this world."

All of that is a nice piece of comfort for the religious who believe there are greater things than man at work, and if they just have faith, will be led and protected by God's glory. However, at one point Eric leads Cody into an alley where he places a container of gasoline and a pack of matches in front of a bum. He then says an incantation which somehow forces the bum to pour the gas over himself and light a match. This is a test for Cody, who walks up to the bum, blows out the candle and whispers to him, "He hasn't forgotten you." As sweet as that is, mere seconds later, Eric flicks his lighter and sets the bum on fire.  Does that mean that God did in fact forget him?

The special effects are not brag worthy but they are not as horrible as Scott wrote.  The rats in Cody's room happen during a dream.  Maybe that is what a horde of rats looks like in Maggie's head. The scene at the end where angels come to the rescue was a bit of a let down as they are, as Patrick wrote, only sparkling lights. Also, we never see what becomes of the demon/nanny. Shouldn't the angel/lights have dealt with her?

There is enough things going on here to keep you watching, but so much of it never makes sense, and I am not even talking about the religious implications. At one point, Maggie is knocked unconscious and then wakes up behind the wheel of a car speeding down a busy road. huh? Does Eric know a teleport to inside of moving car incantation? Later in the film, Maggie is trying to escape with Cody by driving to Vermont. Every gas station she passes has one of Eric's followers watching her, who report to him where she is.  Did Eric place one of his followers at every gas station in every state on the eastern side of the country just in case he may need them one day to report on a woman who just rescued the Christ child and is on the lam?

The basic plot idea is not a bad one, but the execution of it is horribly put together. Yes, Bless the Child puts Christianity in good light, but the film is so bad that it matters not.