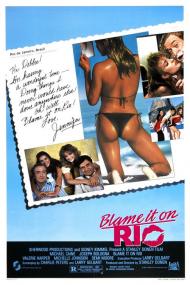 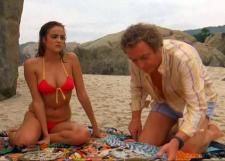 Michael Caine is great and Michelle Johnson has assets that make up for her lack of acting skill.

Blame it on Rio is one of my favorite comedies of the 1980s. Sure, it's a lightweight male fantasy and it features some pretty bad acting from Michelle Johnson as Jennifer, but it also features some really great and funny lines that are aided by Michael Caine's deadpan delivery. Also, because this was the 1980s, this is a comedy that isn't afraid of showing some nudity, which is rarely a bad thing.

Caine plays Matthew, a businessman in Sao Paulo, Brazil who is going on vacation in Rio with his wife; Karen, daughter; Nicole, best friend; Victor, and Victor's daughter; Jennifer. At the last minute though, Karen tells him that she's going somewhere else because she needs to think about things. Once in Rio, 43 year old Matthew ends up having sex with 18 year old Jennifer, which results in some comic situations as they try to keep Victor from finding out and climaxes when the truth comes out and it turns out that Victor has some secrets of his own.

The script was written by Larry Gelbart, the co-creator and writer of M*A*S*H*. Thanks to him the movie features some memorable lines that I still quote today:

"I've always had a problem handling nudity. I like it, mind you. But it is troubling. Anybody's. Even my own. Sometimes, when I'm getting undressed, I almost wish I could leave the room."

"I'm not on any kind of machine am I?" "Don't worry dear there isn't a plug in here worth pulling."

"I'm a vegetarian. I don't eat anything with parents." "Have an artichoke. They're orphans."

"I'm not leaving until I convince her to come along... The flight without her was awful."

Perhaps the movie's biggest weakness is Michelle Johnson as Jennifer. This was her first movie and her inexperience shows. I'm not sure if the filmmakers asked her to do anything in the audition besides take her clothes off, which she seems to have no problem doing throughout the movie. The scene where she confesses to her father that she slept with an older man contains some truly horrendous fake crying. She's okay in the lighter moments, just awful in the emotional scenes. In the smaller role of Nicole, a very young Demi Moore manages to emote more with her few lines than Jennifer can in the larger part.

The movie belongs to Michael Caine though. His dry British delivery is what makes so many of the lines really work. He has great timing and it's mainly him that makes the movie rise above its premise. As an Oscar nominated actor (this was before his first win), he's obviously slumming it here, but he makes the part work.

This movie probably wouldn't get made today. Jennifer, despite being 18, is still in high-school. People would probably protest that Matthew was a pedophile. Okay, so maybe it's a little pervy, but then I first saw this movie when I was fifteen. We're all a little pervy at that age. In any case, this movie has remained a guilty pleasure of mine ever since I first saw it.

Joseph Bologna and Michael Caine get caught in an awkward position in Blame it on Rio.

Blame it on Rio was based on the 1977 French "boudoir farce" Un moment d'égarement (One Wild Moment). Your enjoyment of it will depend on whether or not you can laugh at a middle-aged man sleeping with his best friend's high school-aged daughter. Like Scott I had fond memories of watching it as a teenager and I was still able to enjoy it today.

What I didn't remember was that it was directed by Stanley Donen. It was in fact the last theatrical feature by the legendary director of Singin' in the Rain and many other classic Hollywood movies. Although he is still living as of this writing he has long since retired. He does offer a clue at the beginning of the movie when Michael Caine's character approaches Rio from the air. He looks out his window and Donen inserts a scene from the classic 1930's musical Flying Down to Rio, showing scantily clad women dancing on the wings of airplanes while Fred Astaire sings the title song. It sets the stage for just what kind of silly farce is coming.

Apparently Donen saw the French comedy with his then wife French actress Yvette Mimieux. They loved it and he bought the rights for an American version. The best decision he made was to shoot on location in Brazil. The stunningly gorgeous city of Rio de Janeiro is shown off beautifully and this tropical paradise is the perfect locale for these silly sexual shenanigans.

I agree that the script is memorable. My favorite line comes when Michael Caine, in attempting to explain his actions to his best friend, says, “I wasn't thinking what I was doing.” A waiter overhears the remark and comments wisely, “It's only when a man is not thinking what he's doing, that you can be sure, he's doing what he's thinking.”

Michelle Johnson handles the silly moments OK but I agree she's no dramatic actress. Her best scene is when she and Michael Caine are on the beach and she starts talking about how their love is like a secret and then she compares it to a song. He quickly responds that it's much better as a secret than a song. To give you an idea of just how casually this movie takes its subject matter look no farther than the scene where Michael Caine tells Joseph Bologna that he loves his daughter. Bologna sarcastically asks,“What the hell are you doing, asking for her hand? "With this teething ring I thee wed?"”

Joseph Bologna plays second fiddle to Caine. They have decent comic chemistry together. Valerie Harper gets one good scene in a small role and Demi Moore is completely wasted. Her character is never fleshed out or given a chance to develop and she and Michael Caine don't even seem to be related let alone father and daughter. I have to admit that Michael Caine gives his usual sterling performance. His character reminds me of a cross between John Cleese and Woody Allen.

Blame it on Rio has an old-fashioned sense of humor mixed with a sexually liberated 1970's attitude. 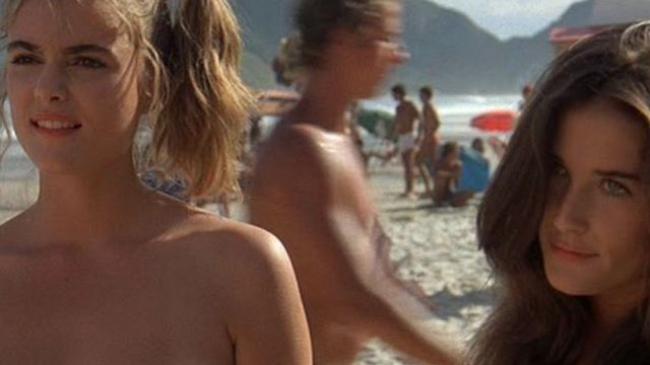 Holy F-ing Christ! I cannot imagine a bigger betrayal by a friend than one who would fuck my daughter (if I had one). Michael Caine tells Jennifer at one point that the first time he ever kissed her was when she was an infant. Who knew that 18 years later he would put his dick inside her. Did that sound crude? Well, it is.

And what the hell is up with her father when Jennifer walks up to him and Matthew topless on the beach. Her dad should have told her to cover up in front of them. How inappropriate is this girl to display her tits in front of her dad and his best friend? He has obviously failed as a father as he raised a girl with no moral compass.

Yeah, I actively hated everyone in this film. I never laughed. I smiled when Matthew is packing quickly but otherwise found little to enjoy. Michelle Johnson is physically attractive but is never without a plaster of makeup on. Her best acting is done sans clothes and mouth shut.

Obviously, this movie was written by men. Scott mentioned the script by Larry Gelbart but it was also written by Charlie Peters, who ten years later wrote My Father the Hero (1994) where a teenage girl on vacation tries to impress a boy by telling him her father is really her lover. Yeah, there is a theme going on here.The most disturbing line in Blame it on Rio comes early on when Jennifer tells Nicole that she once had a crush on Nicole's father and Nicole adds that she did as well. WTF?

Maybe it is because I raised children and my brothers have not but I found no entertainment in these characters. Perhaps if this movie was played darker I may have not taken the sexual callousness so seriously. The pacing and music is all light and breezy in an attempt to tell the audience to not take any of this to heart but it never quite works for me. Even though they all say they love each other, none of them actually do. If they did, they would not be fucking each others family members.

I may have liked this film as a teenager for the nudity but as an adult I find Blame it on Rio an abomination of moral sexual depravity.