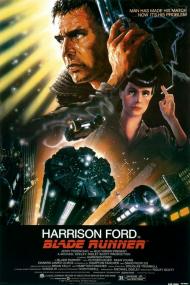 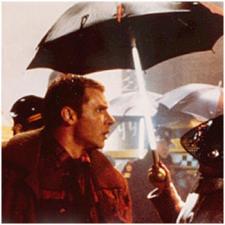 Deckard and the glowing umbrellas.

So much has been dissected and discussed about Blade Runner that I wondered if it would still lived up to the hype. Although it pretty much bombed in it’s initial theatrical release, it gained a cult following and has grown in stature. It has had several rereleases and just about as many edited versions. I watched the “Final Cut,” which Ridley Scott says is his favorite version. The most notable changes are the absence of the narration and the final happy scene of Deckard and Rachel driving through the country side. The unicorn dream was added during a previous directors cut and it remains in this one.

Blade Runner takes place in 2019. In this world, most normal, healthy people seemed to have left Earth, leaving the dregs of society to live in the squalor of an overly crowded world of lights and noise. To help the humans in space and on other planets, replicants were created to act as slaves soldiers and prostitutes, serving the needs of humans. Replicants are human in material but are factory made and have a short shelf life/life span. Four replicants escape and return to Earth to see if they can extend their life time.

A Blade Runner is basically an assassin who targets replicants. Deckard is a Blade Runner in the mold of Sam Spade. The entire movie is like a film noir. Deckard is a detective trying to find and kill the replicants. He wears a trench coat and the original narration was straight out of an old Bogart movie. Rachel wears clothes and has a hairstyle that would fit in the 1940s. This is a science fiction film and the style is retro-futuristic. Some clothes look old fashioned while others look quite bizarre.

Deckard goes about finding the replicants while the replicants go about trying to find a way to keep living. They each leave corpses in their wake. Deckard meets a new model replicant, Rachel. She at first has no clue that she is in fact not an actual human. She and Deckard fall in love. The scene where they have sex is interesting. He tells her what to say as she has no clue how any of it works.

One of the first things I noticed, from an early viewing of Blade Runner, is the religious symbolism. Roy meeting Tyrell is like man meeting God. “It’s not every day one gets to meet it’s maker.” He simply wants to live, “I want more life, father.” In the original version he said, “I want more life, fucker.” Near the end, Roy puts a spike through his hand like Jesus on the cross. He dies while holding a white dove that then flies to the heavens.

The real debate with Blade Runner is the question, is Deckard himself a replicant. The original version has Deckard mention an ex-wife during a narration. Without the narration the only history revealed about him is the police captain talking him into the job based on how good at it he has always been. The big suggestion comes from his dream about the unicorn, that he shares with no one. The final scene has Deckard find a folded up piece of paper that looks like a unicorn. Does this mean that Gaff knew he was a replicant, that his dream was an implant, and this was his way of telling him?

Blade Runner will always be remembered for the atmosphere. Scott created such a detailed, visual world to look at here that one viewing may not be enough to take it all in. His use of shadows and smoke really sets a mood as well as a film noir look. The problem is that nearly every scene starts slow as it introduces the setting. The final action sequence of Deckard being chased by Roy through the abandoned, decaying building is symbolic without slowing down the film. Roy is experiencing entropy as much as the building around him. If only Scott could have filmed the rest of the film with the same urgency. 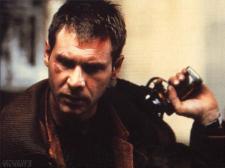 This is a movie that is more interesting than entertaining.

I'm just going to say it. I found this movie to be kind of boring. I know, I know, it's a classic and it's beautifully filmed and it's full of symbolism and meaning and it questions what it means to be human, but it's also too long and too slow. Its climax takes way too long to come around.

Maybe I'm in the minority but I missed the narration. Like you Eric, I watched the "Final Cut" and without the narration I found Deckard to be much less sympathetic or likable. The movie is trying to be Noirish and the narration fit that. Here you have one of the most complete future worlds ever put to film and the narration acted as a guide to that world and helped you feel a part of it. Maybe Ridley Scott is just such a visual director that he didn't want words spoiling his beautiful scenes. I think without the narration the movie seemed longer.

The one thing that surprises me is that they set this movie in 2019. Even way back in 1982, did Scott really think the world would have changed quite so much? I think he depicts a realistic version of the future. Everyone's not suddenly wearing the same color jumpsuit and every door isn't a sliding door. It just looks like this world with more advanced technology. It's been imitated but never equaled in other movies and it was all done without CGI.

In an interview in the New York Times, Ridley Scott ended the debate over whether or not Deckard is a replicant. Although since all versions of the movie keep it ambiguous, there's no need to take his word for it if you disagree. I think this version does tend to align itself more with his answer to that question.

I remember enjoying this movie a lot more the first time I saw it than I did this time. Maybe because I didn't know how it was going to end or because I preferred that cut. It was also an influential movie. Clearly the Cylons in the remake of Battlestar Galactica are based on the Replicants of this movie. This is an interesting movie to watch, but I wouldn't call it entertainment. 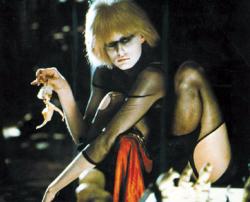 I watched this movie many years ago with the voice-over and happier ending. Although I agree that the narration fit with the noir style of the movie I think this version is ultimately more satisfying. This situation would not, in all likelihood, have a happy ending. But then Decrepit Future movies are intended to be warnings towards where we don’t, as a society, want to end up.

The visual style of the movie holds up well and the world Scott created is intriguing and detailed. As Eric mentioned most of the wealthy (i.e. white English speaking) people have left the polluted Earth for greener pastures and the masses of humanity left behind must fend for themselves in a dirty, overcrowded world. The city of Los Angeles here is perhaps the best futuristic city ever captured on film (with the possible exception of Fritz Lang’s Metropolis).

One thing I did notice is that although some of the technologies shown remain more advanced than what we have now (a mere eight years before this movie takes place) others are laughably out-dated. Take the computer that Deckard uses to examine images as an example. It is voice activated and pretty high-tech yet the monitor it is displayed on is straight out of the 1980s. It isn’t in widescreen or on a flat screen and apparently while they did develop the technology to create synthetic life that is virtually indistinguishable from humans, they never thought of High Definition resolution.

Harrison Ford (a boyish 39 at the time) gives the best performance of his career as the tough-as-nails Rick Deckard. I’m glad Ridley Scott settled the question of is he or isn’t he a replicant. The story loses much of its power if he is human. Sean Young, in her Joan Crawford as Mildred Pierce wardrobe, makes you believe she is a replicant with subtle expressionless looks in her eyes. Her discovery that she isn’t human is emotionally stirring and profoundly thought provoking. It beautifully raises the question just what does it mean to be human after all?

The violence and gore hold up well. There are several grisly incidents including Roy gouging out the eyes of his creator because he cannot give him a longer life. Daryl Hannah is truly memorable as Pris. She is one frightening femme fatale. Her death scene is brilliantly staged and shot and it kicks off the climactic confrontation between Roy and Deckard.

Scott, I had the opposite reaction from you. I actually enjoyed it more this time than I did when I saw it years ago. The pacing isn’t bad and it runs under 2 hours. I agree that Blade Runner is interesting but I have no qualms about calling it entertainment as well.