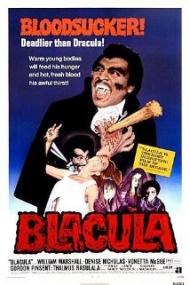 Blacula is a politically incorrect campy classic. It falls into the “so bad its good” category. It is played straight but is sometimes funny as hell.

It begins in Transylvania in 1700, where an African man and his bride are visiting Dracula at his castle, unaware that he is a vampire. They are there to protest the slave trade but become the main course at dinner, with the man getting turned into a vampire and locked into a coffin. Standing over the coffin, Dracula announces, “You shall pay, black prince. I shall place a curse of suffering on you that will doom you to a living hell. I curse you with my name. You shall be... Blacula!”

In 1972, a bi-racial gay couple goes to Dracula’s castle to purchase antiques to sell in California. They bring their purchases back to their store in Los Angeles, including Blacula’s coffin, which they finally decide to unlock. They quickly become Blacula’s first victims, turning them both into the undead.

Blacula follows some Dracula traditions. He sleeps in a coffin and his image does not show up on photographs. He meets and becomes obsessed with a woman, Tina, who looks like his long dead wife. What this vampire does differently is his attitude. When chasing Tina, he gets hit by a taxi. He thinks nothing of the female driver who assumes she just injured him. He was not even interested in biting her until she starts yelling and pisses him off.

In place of Van Helsing is Doctor Gordon, whose wife is friends with Tina. Gordon investigates the murder of the, “Two faggot interior decorators and a lady cab driver.” Yeah, the dialogue is properly offensive to modern sensitivities. After questioning an undertaker, the undertaker says of Gordon, “That is the rudest nigger I have ever seen in my life.” Hold on. It’s alright. The undertaker is black.  The funniest, and most offensive, line is when two white policemen, driving in a patrol car, see the black gay vampire and one asks the other, “Hey, Danny take a look at that fag. Isn’t that the one?” The other policeman answers, “How can you tell? They all look alike.”

Blacula makes for an entertaining Halloween watch. One scene takes place in a graveyard at night when Gordon and his wife dig up the body of the white interior decorator. One creepy moment is when a recently bitten victim turns into a vampire at the morgue. In slow motion, she comes running out into a hall way to attack the man on duty. The scariest scene is when Gordon and his detective friend enter a warehouse full of vampires.

William Marshall makes the movie work. He sells the part by playing Blacula completely straight. Other than ordering a “Bloody Mary” at a bar, nothing he does is tongue in cheek. Marshall was born in Michael Jackson’s home town of Gary, Indiana but speaks in a voice that seems foreign. No matter how ridiculous it all becomes, he maintains a true level of conviction. He goes for the Oscar in his death scene and check out the sign posted behind him.

With its dialogue and soundtrack, Blacula is a horribly dated film that may actually be considered more entertaining today than when it first came out. What was a serious horror film is now a campy, uncensored hoot.