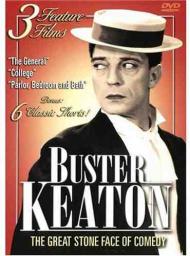 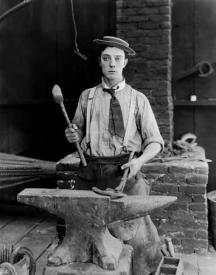 The Blacksmith is a two reel short Buster Keaton starred in, wrote and directed in 1922. He plays a blacksmith’s assistant and since this is Buster Keaton he is not very good at his job. In fact he is downright inept and quite messy and destructive to boot. It begins with him getting into a fight with his boss because all of the metal tools that Buster is supposed to hand to him keep getting stuck to a large magnet overhead. As the smithy towers over Buster a passing sheriff intervenes and the smithy is arrested, leaving Buster to man the blacksmith shop alone.

Of course he makes a complete mess of things but manages to get the girl in the end. What a surprise. My favorite gag was when he makes like a shoe salesman when fitting new horseshoes on a beautiful white horse. He uses a sliding ladder to pick out different horseshoes lined along a wall and holds them up for the horses’ approval. The horse shakes her head no and then gestures towards some fancy looking horseshoes kept under a glass display. After putting a fancy horseshoe on one of the horses’ front hoofs Buster holds up a mirror so that the animal can check herself out. It is all done very seriously of course and is charming.

Buster Keaton’s world was more absurd and surreal than that of either Chaplin or Lloyd. Chaplin’s world was more whimsical and seemed to look back towards the 19th Century. Lloyd’s was very 1920’s modern with jazz age energy. Keaton’s world was a mix of those two but with his own unique spin. Only Keaton, of the three, would use a child’s balloon as a car jack as he does here. Keaton was also the most hapless and destructive of the silent clowns, watch what he does to the Rolls Royce that is brought in to the shop.

The Blacksmith is inventive but not brilliant. 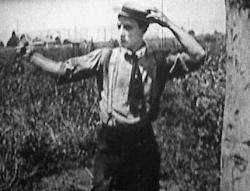 After watching a recent documentary on Keaton, I can no longer watch his films the same way as I use to.   The documentary showed a virtual tour of Buster Keaton studios, from old photos and films.  From 1920 to 1928, Keaton had his own studio located down the street from Metro Pictures.  It was originally built for Charles Chaplin, but later became Keaton's.  He filmed all over California and Los Angeles, but mostly right around his studio.

As I watched The Blacksmith, I recognized the barn that acts as a blacksmith and auto repair shop.   It was located on his studio property, and was featured in many of his films.   The fields around his studio, featured in this short, show how rural it was then.  Today it is all part of sprawling LA.

My favorite bit was Keaton getting the woman's horse a set of shoes.   Fox was his common female lead at his studio and appeared in most of his films.  Roberts plays the heavy here as he did in most of Keaton's shorts.  They worked well together as demonstrated by the scene where Roberts tries to hit Keaton with the car door.

The documentary showed one very interesting picture taken on the property of Keaton's studio.  Keaton stood in the middle with arms stretched.  On one side was Joe Roberts pulling on Keaton's right arm while Fatty Arbuckle was pulling on Keaton's left arm.   It could be seen as symbolic as one big guy was his mentor from the past and the other was a supporting actor of the present.   Also it shows that although this was years after Keaton and Arbuckle went separate ways, they were still friends.

Buster Keaton and Joe Roberts in The Blacksmith.

This mildly entertaining Keaton short starts with a spoof of the Henry Wadsworth Longfellow poem, "The Blacksmith".  "Under a spreading chestnut-tree, the village smithy stands;" begins the poem, only here of course the camera pans up and we see that Keaton is standing under a palm tree.  And the "iron band" muscles of the poem prove to be simply balloons on Keaton.  Quite quickly though the short veers away from satire and into Keaton's usual slapstick.

I always love the historical interest of these old films.  Who knew that blacksmiths were the first auto mechanics?  And did kids really tie their schoolbooks together with a belt and sling them over their shoulders?  This movie shows it so.  And the open fields where now the Los Angeles suburbs stand is another interesting point.

While I admire Keaton's physical abilities and the inventiveness with which he throws himself into his comedy, I only find them somewhat funny.  He really is like a living cartoon, but more like a Road Runner and less like a Bugs Bunny.  It's all about the slapstick, which is probably my least favorite type of comedy.

It's probably because of my dislike of slapstick that I too found the scene with the shoe shopping horse to be the most original and funniest in the short.  Although I also liked the shock absorbing saddle gag as well.  Too many of the jokes though are telegraphed way in advance.  I mean, by the time the guy brings the Rolls Royce into the shop, you know it's going to be destroyed.

I do always find something to laugh it in a Keaton short, but of the three Silent Comedy Gods, I've always preferred Lloyd and Chaplin (in that order) over Keaton.