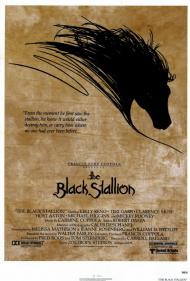 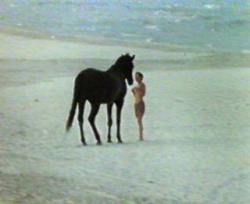 A boy and his horse.

The Black Stallion, taken from the novel by Walter Farley, is a horse story for boys. It is something of a male counterpart to the Elizabeth Taylor classic National Velvet. Both movies involve a young child who befriends a beautiful horse, gets jockey training from Mickey Rooney and goes on to enter a famous race.

The Black Stallion was executive produced by Francis Ford Coppola while he was busy directing Apocalypse Now. Unable to direct himself, he instead hired an old UCLA film school friend Carroll Ballard to helm the project. It turned out to be a good decision as the direction is exceptional and the cinematography exquisite.

The story begins onboard a ship off the coast of North Africa in 1946. A young boy is traveling with his father (played by Hoyt Axton that you may recognize as the father from Gremlins or from his dozens of television appearances). Also onboard is a wild black Arabian Stallion. The boy feeds the horse some sugar in one scene in an attempt to befriend him. Anyway the ship sinks one night during a storm and the boy and the horse are the only ones that make it alive to a nearby island. The horse actually saves the boy’s life because the boy holds on to some ropes attached to the animal and is pulled to safety as the strong horse swims to shore.

The entire movie uses dialogue sparingly. The next 35 minutes or so are completely without talking, as the boy learns to survive on the island and make friends with the beautiful, regal stallion. The boy initially cuts the horse loose from where the ropes he’s tied to are tangled among some rocks. The horse later repays the favor by saving the boy from a cobra. The most famous scene in the movie is when the boy finally rides the horse at a gallop through the surf.

After being rescued the boy and his horse return to the boy’s home and mother (Teri Garr). The boy spends the first night home sleeping in his backyard with his new pet. The still wild stallion is disturbed by the morning garbage pickup and runs amuck through the small town with the boy chasing after him. They wind up at a farm owned by ex-jockey Mickey Rooney and the last hour is about the boy training with his horse, now called The Black, to race at Belmont.

12-year-old Kelly Reno is wonderful as the boy Alec. As the son of cattle ranchers he had been riding horses since he could walk so he was uniquely qualified for the part. To his credit he handles the drama as well as he handles the equestrian side of things. Which is a good thing since the entire story is shown from Alec's perspective and it is one nonstop boy-and-his-horse adventure/fantasy.  Director Ballard shows that an engrossing movie can be made without much talking. He also manages to keep the story clipping along while keeping it poetic at the same time.

Mickey Rooney was Oscar nominated for his role as the burned-out horse trainer Henry (he lost to Melvyn Douglas for Being There). He has always been underrated as a serious actor. Here he proves that he could adapt to the more subtle and naturalistic acting style of the 1970’s with ease. Gone are the hammy mannerisms from his old MGM days. Although as an MGM production this marked a return of sorts for Rooney, to the studio where he had been the number one box office star 40 years earlier.

The Black Stallion was such a hit (it cost 2.7 million to make and grossed 37.8 domestically) that a sequel, The Black Stallion Returns, was released 4 years later. Unfortunately neither Mickey Rooney nor the box-office magic of this original movie returned with it.

Mickey Rooney in The Black Stallion

I agree with almost everything Patrick wrote except, "He (Carroll Ballard) also manages to keep the story clipping along while keeping it poetic at the same time."  The entire plot is merely that of a boy befriending a horse and racing him once.  That is very little plot for a two hour movie.  Many times I wished it would just move along a little quicker.

I agree however, that Carroll Ballard has an amazing eye for beauty.  The Black Stallion is filmed with grace and poetic license.  He films the scenes stranded in the desert as if in some child's dream.  Alec befriends Black as the sun sets dramatically, spreading color over the ocean, placing the boy and horse in silhouette.  He paints a striking landscape with vivid colors and contrasts.  Ad Carmine Coppola's music and the atmosphere becomes complete serendipity.

Even when the scenes shift to small town America, Ballard maintains his artistic eye.  Black runs through a town that would put Mayberry to shame.  Norman Rockwell himself could not have made late 1940s small town America look so fresh and inviting.   The world is splashed with color and tranquility.  Even the rainy scenes have a striking atmosphere that does not seem entirely real.

I have seen many horse races in movies but the one filmed here is particularly engrossing.  This is helped greatly by having the camera on the track, as if the audience is a fourth rider in the race.  The sound of the horses hooves pounding on the ground mimic the pulse of all involved.

Plot wise, The Black Stallion is a fairly bland sports movie.  Its sole redeeming value being how the film was shot.  Although much of the film is predictable, the visuals are stunning, and often a delightful distraction. 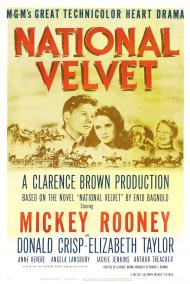