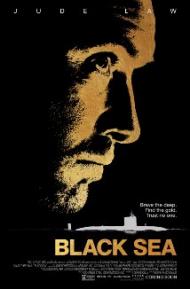 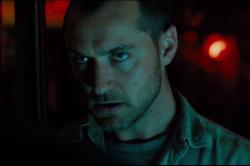 Black Sea is a cinematic yarn about a treasure hunt in a rickety old sub that goes horribly wrong. On the positive side, it features a talented cast of professional actors -led by Jude Law- and solid direction by Kevin Macdonald that keeps the tension building right up till the end. Its problems are a predictable screenplay and cliched characters. The plot travels a well worn path. We meet the down on his luck protagonist as he's getting fired from his job. He learns of a lost treasure of gold sitting at the bottom of the Black Sea aboard a sunken WWII era German U-boat. He agrees to lead a mission in search of the missing gold.

Next up is the gathering of the crew montage that is a requirement of films of this type. It is fairly brief as far as these montages usually go. The crew is half British and half Russian, a necessity since the sub is Russian. For the most part they're all familiar stereotypes. There's the spunky old guy on his last adventure, there's the unhinged lunatic who's also an expert at what he does (in this case it's diving), there's the cowardly company man out of his element but around to cause trouble, and there's the young kid making his maiden voyage.

The kid is named Tobin (Bobby Schofield) and he's 18 (or just about). His baby face makes him look about 15. At first the Russians don't want him on the sub since it's bad luck to have a virgin aboard. It turns out he's not only not a virgin, but he and his girlfriend are expecting a baby. The Russian characters are not as clearly defined but they are all recognizable types as well. One of them is named Morozov (played by Grigoriy Dobrygin) who, it turns out at a critical point in the story, speaks English.

The script sets up Jude Law's character as the sympathetic hero. In his eyes he's a victim of corporate greed not only in his professional life but in his personal life too. His ex-wife left him for a rich guy, taking their daughter with her. More than once we are shown glimpses of his memories spent on the beach with his wife and daughter in a happier time.

At a certain point, fairly late in the movie, he changes. Then it tries to be like Treasure of the Sierra Madre on a submarine, but it doesn't stay with the idea for long. There are other problems besides just greed aboard this submarine. This dysfunctional crew resorts to violence long before they find the gold (c'mon you knew they were going to find it). The ending is somewhat satisfying but not completely so.

I guess for a January release Black Sea isn't so bad. However, despite several well-crafted moments of claustrophobic tension and some first rate acting, it remains too damn predictable - right up till the final scene. 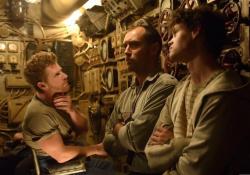 Patrick, it's fitting that you describe this movie as "like Treasure of the Sierra Madre on a submarine." because in an interview with "Screen Daily" director Kevin Macdonald said that was his intent, stating, "I would describe it as The Treasure of The Sierra Madre in a submarine. Hopefully, it will be one of those hard, intelligent B-movies they used to make - dark, little vicious B-movies." With that as his intention, I would say he succeeded for the most part, but unfortunately, as Patrick stated, too much of the plot, including who lives and who dies, is too predictable.

Another problem with the film is its two hour running time. For the little backstory provided for most of these characters they could just as easily have started with the crew boarding the submarine. Everything before that is completely superfluous. These guys are all stereotypes anyway, as Patrick pointed out, with many of them completely interchangeable. This film's best moments are the tension packed ones aboard the sub, not hearing these guys complain about losing their jobs. The faster the story could get to those moments the better.

Law does a good job in the lead role. He puts on a Scottish accent that's at least passable. When he began his career he tended to play more metrosexual pretty boys, but as he's aged, lost his hair and gained a few wrinkles, he's started playing tougher parts and they suit him. He's perfectly believable as the submarine captain here. With the possible exception of Bobby Schofield as Tobin, Law's Captain Robinson is the only fully developed character.

Although I agree with Patrick that much of the story is predictable, I still seem to have enjoyed it a bit more than he did. A tighter edit to improve the pacing and it could have been quite entertaining. Compared to your typical January release it's fantastic. 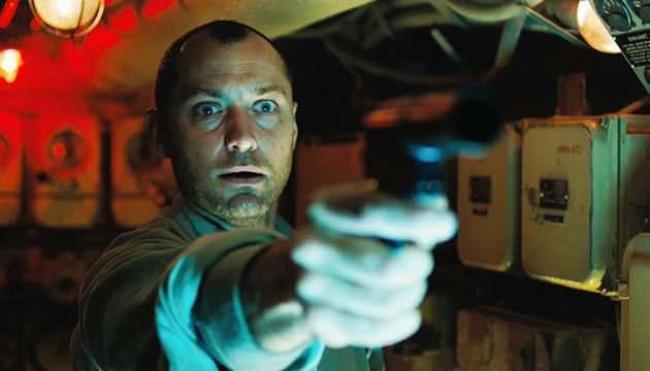 Movies about men experiencing extremely tense moments in a submarine are a genre onto themselves. The tension can come from an enemy submarine or Destroyer but the usual conflict in these types of films is often between the men in charge of the submarine. They are in close quarters and thus forced to work together no matter how they may not get along.

In Black Sea, we have a submarine crew, as Patrick mentioned, that is half British and half Russian. Right from the start they do not like or trust each other. One British sailor makes a disparaging comment that although all are promised two million pounds, it means more to the Russians as they live in a place he describes as, “shitvillastan.”

Tension mounts and before you know it one man has killed another. It leads to a disaster that sends the submarine to the bottom of the sea. Fortunately for them it is near the sunken U-Boat. Now all they have to do is get the gold from the Nazi sub to theirs, fix their damaged sub and get to the surface without anyone killing anyone else or a surface ship discovering their presence. Oh, and if that were not enough, the company man reveals all is not as they were originally told.

Like Scott, I enjoyed Jude Law’s performance. We never really see him shirtless but he carries himself like he is muscular and tough as hell. His passable Scottish accent ups his masculinity quotient. I wonder if Gerard Butler originally turned down the role. I agree with my brother that this type of character is a great fit for Law at this point in his career.

Although Law’s Captain Robinson is the lead character, I did not find him wholly worth rooting for. He has a sad story to tell but I never found myself truly caring for him or the success of this salvage operation. When getting fired, he complains, “I lost my family because of this job.” It later proves to be a very ironic line.

The plot should have been told through the eyes of Tobin. He is the youngest of the crew and as such is the easiest to like. All of these middle aged men seemed to have screwed up their lives. How else did they end up on this ship? With his girlfriend knocked up and he being penniless, Tobin is on the brink of being just like them. Also, if the film had been told from his perspective, we could have skipped those early scenes of gathering the crew. We could have met them as Tobin does.

Although this is an intended tense adventure film, it lacks any and all sense of fun. At least one joker in the crew would have helped. I agree with Patrick’s description that the ending is not completely satisfying. I will not give it all away but had Black Sea been told from Tobin’s perspective, it would have been.