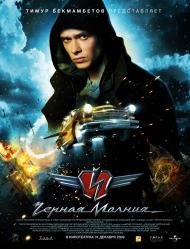 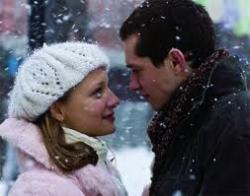 The Russian film makers of Black Lightning (Chernaya Molniya) readily admit that they based the concept on American super heroes. Elements of Superman, Batman and Spiderman can be seen throughout.

The movie opens with some construction workers finding an old car they sell to a man who gives it to his college aged son Dima, as a birthday gift. The snotty Dima is not impressed, and is in fact embarrassed by the old car. It is a Russian made sedan called a Volga, right out of the early 1950s.

Both he and his best friend are interested in a new girl, Nastya, in their class. His friend tries to impress her with money. Dima gets a job delivering flowers to earn money to take her out. While making deliveries, he gets caught in traffic, and learns that his car can actually fly.

The car was part of an experiment decades ago to find a new source of energy. It was put in the car for some reason and abandoned, until the construction workers found it. Meanwhile, a wealthy man, who is a classic egomaniacal villain, wants the energy source and is paying his hoods to find it.

One day, while waiting for his father in his car, a woman frantically pounds on Dima's car window saying a man around the corner is hurt and needs help. Dima coldly tells her that emergency calls are free and dismisses her. Moments later the light bulb goes off and he walks over to find his dad dying in the street. The doctors later tell him he could have been saved had he gotten to the hospital sooner.

Wracked with guilt, Dima decides to do good with the flying Volga. He flies it into a burning building and rescues a child,. He immediately becomes famous. He paints the car black and earns the nick name Black Lightning. He flies around Moscow saving people and capturing bad guys.

Nastya finds herself attracted to the mysterious hero. In a classic Clark Kent/Lois Lane scenario, Dima and Nastya have a conversation where he clearly likes her while she sees him only as a friend, while going on and on about Black Lightning. Nastya eventually thinks that Dima's best friend is Black Lightning.

Clearly this film was made on a big budget. It had the most CGI effects of any Russian made film up to this point. Grigory Dobrygin was an unknown cast in the lead but many older, famous Russian actors populate the film. One of the scientists who created the car is recognizable from Night Watch and Day Watch as Anton's old neighbor. One of the directors, Dmitriy Kiselev, was a second director and editor on Night Watch and Day Watch.

Universal Pictures released this film, but it was clearly a good idea to not release it to theaters in The United States which is already saturated with super hero films. Although it has enough action and special effects, it too often copies some American films. Dima has no super powers to speak of and never actually gets into any real fist fights. He is basically a young version of The AbsentMinded Professor.

Although there are very few surprises to be found, Black Lightning has a stylish look and kept my attention one cliche at a time. 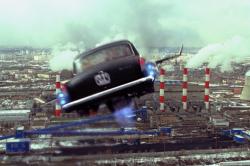 Actually Eric, the car in Black Lightning is a 1966 Volga, it's not from the early 50s. Other than that I pretty much agree with you, only I enjoyed it less than you did. I am not as forgiving as you are as far as how derivative and formulaic this movie is. It is pretty much a Russian version of the Spiderman story only with a flying car instead of super powers caused by a spider bite. Let's see, there's a poor kid with a rich best friend with whom he is competing for the affections of a girl. He gains a special ability which he uses to become a vigilante. He does battle with a rich dastardly villain. Sound familiar?

The most obvious way it rips-off Spiderman though, is the scene Eric mentioned where Dima does nothing to help a stranger only to learn it was his father. In an earlier scene he had made a bet with his professor (who is also the villain). Dima had arrived late to a lecture because he had stopped to help a stranger. The professor gives him money to not help a stranger next time. He even gives him the line Eric mentioned, “It's free to call an ambulance.” You know, with great power, comes great responsibility.

The special effects are decent but nothing to write home about. One thing that I found silly was that even though Dima flies his car all around Moscow delivering flowers, no one seems to notice a flying car. Well one young kid is shown noticing, and a trio of drunks, who are shown jogging in the final scene having given up drinking because they saw a flying car and assumed it was an alcohol fueled hallucination.

Black Lightning definitely has a lighthearted tone, even when dealing with the death of a loved one. The cast is decent but not exceptional and the story clips along at a nice pace. If I was a twelve year old who had never seen a superhero movie before then Black Lightning would have blown me away. For anyone who's watched American superhero movies from the last dozen years this flick will seem like what it is, a complete copycat.